College students in a new scholarship program will become “ambassadors,” stressing that democracy is not something to be taken for granted. 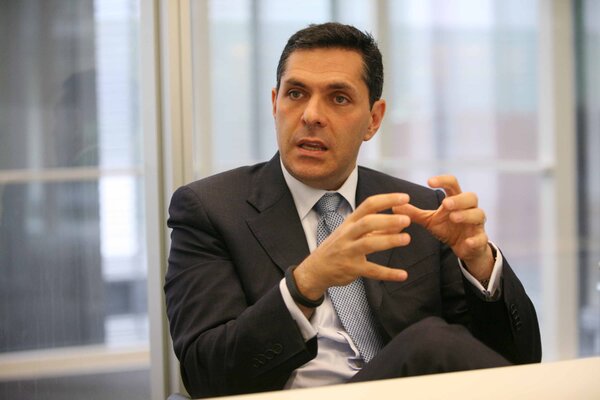 The founder of an energy bar company, a former chess champion, a retired U.S. Army colonel and a celebrity chef are teaming up to do something that is as unusual as the collection of people they have assembled.

They’re starting a $1 million pilot program for Ukrainian college students who are studying in the United States, underwriting their educations for a year so long as they are willing to become “ambassadors” for democracy — with the surprising target audience for that message being American students.

The program is being run by a pickup team that includes Daniel Lubetzky, the founder of Kind bars; Garry Kasparov, a Russian-American democracy activist who was once the world’s top chess grandmaster; Col. Alexander Vindman, the Ukrainian-born former National Security Council official who testified in Donald Trump’s first impeachment proceedings; and José Andrés, the chef-turned-humanitarian who feeds the world’s crisis spots.

Their intention is to scale up the program rapidly as other sponsors and board members join the project, which will be partly administered by the Institute of International Education, a global nonprofit. The institute will help select the first batch of 20 students this month, with input from the above co-chairs of the new group.

Ukraine and the United States are facing disparate threats to their democracies, and extremism, authoritarianism and disinformation are on the rise worldwide. With their relatively new democratic government, Ukrainians can provide a strong warning and a metaphorical call to arms to Americans, the new group argues.

“We’re doing this in part for strategic reasons,” Lubetzky said. “To awaken Americans about how we cannot take for granted the gifts we have about democracy and freedom and the rule of law.”

Lubetzky, who grew up in Mexico as the son of a Holocaust survivor before moving to the United States as a teenager, said he had two main motivations.

First, he said, he was inspired by the Ukrainian people’s fight against Russia’s invasion, and their struggle to preserve their fragile democracy in the face of all odds. And second, he said, he is deeply worried about the state of America’s own democracy, particularly after the events of Jan. 6, 2021, and the subsequent persistence of falsehoods about the 2020 presidential election.

A former Soviet state, Ukraine adopted democratic institutions after the fall of the Iron Curtain — at one point overthrowing a pro-Russian government in what became known as the Maidan Revolution. That uprising deeply affected Vladimir Putin, the Kremlin leader, who saw in it the hand of the U.S. government. Putin responded to the revolution by annexing the Crimean Peninsula in 2014 and attacking the eastern portion of the country, and later by invading it outright.

Now, Ukraine’s T-shirt-wearing president, the former comedian Volodymyr Zelensky, has become an unlikely international symbol of courage in the face of tyranny — so much so that one often comes across quasi-serious “Zelensky 2024” bumper stickers in parts of the United States.

“My father always saw the light in the darkness,” Lubetzky said. He told a story of how a Nazi guard at Dachau, the German concentration camp, threw a potato at the feet of his severely undernourished father — an act of kindness the guard clearly undertook at some personal risk.

Vindman, who is finishing his dissertation on the history of Ukrainian-American relations, is drawing on his experience with State Department-run education programs for international partners of the U.S. military. As an officer who did stints abroad in the former Soviet Union, including Moscow, Vindman saw the power of such programs — and wanted to recreate that experience for the estimated 1,700 Ukrainian college students in the United States.

“I saw how those people terraformed their own communities,” Vindman said — in other words, they became agents of change within post-Soviet society.