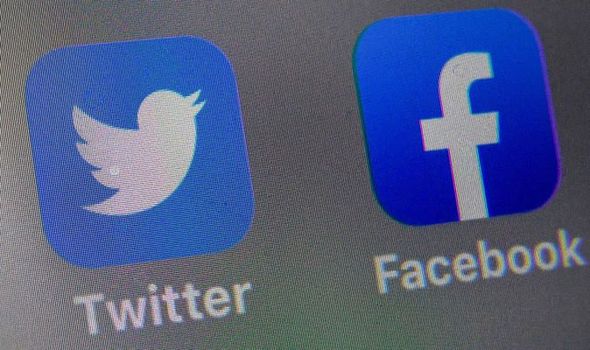 MPs are pushing for a so-called “David’s Law” to clamp down on social media in memory of Southend West Conservative MP Sir David Amess who was murdered earlier this month. It comes as a new Redfield and Wilton poll for the Sunday Express has suggested that a majority of Britons now believe social media has made the country a more dangerous place.

From the survey of 1,500 people 50 percent of the public think social media has made the world a worse place while 54 percent think it has made the UK a less safe place.

In a sign of growing concern over anonymous accounts, the poll found that 74 percent would support requiring all social media users to provide a verified form of identification.

The public reaction to the horrific murder of Sir David, who died of knife wounds after being attacked during one of his surgeries with the public, was also reflected in the finding that 70 percent agree that criminals convicted of murdering an MP should get a whole life prison sentence meaning they are never released.

He has added his support to making internet giants the publisher in the case of anonymous accounts, describing it as the “Carter Ruck option” after the famous firm of litigation lawyers.

He said: “These fascinating poll findings show considerable concern among the British public at the deliberate misuse of social media, which David’s Law is intended to address.

“When we debate this in Parliament in the New Year, one suggestion which might have merit would be to legislate to make social media companies equivalent to publishers, who can then be sued for promulgating obviously vile or threatening comments. For want of a better name, we might perhaps call this the ‘Carter Ruck Option’.”

The Sunday Express has learnt that MPs from across parties will put forward an amendment to the Online Harms Bill, currently going through the Commons, to have Twitter, Facebook and other social media companies deemed as the publisher with anonymous material.

Currently, the law allows social media companies to avoid being the publisher in the same way newspapers and broadcasters are directly responsible for their content.

If the law was changed it would mean that complainants could sue the social media companies for defamation and they would also be held directly responsible for potential fines for harmful content.

Former education minister Sir John Hayes, whose Common Sense Group of Conservative MPs is backing the proposal, said: “Social media has become a swamp of toxicity which has polluted political debate and public discourse in this country.

“Much of that comes from anonymous accounts which the social media companies commercially benefit from but take no responsibility for.

The move would avoid an outright ban of anonymous accounts which legal experts argue would be difficult while concerns have been raised that it would expose pro-democracy movements in places like China.

They have also proposed that all social media users should have the opportunity to verify their accounts, make it easier to see who is verified and block unverified accounts.

Ms Baillie, the MP for Stroud, said: “Clean Up The Internet’s work to highlight the problems associated with misuse of anonymity on social media is an important contribution.

“If we do not tackle anonymity, the horror, the suicides, the bullying, the racism, the misogyny, the people being put off becoming MPs, will continue unchecked. Clean Up The Internet is demonstrating that workable, proportionate solutions to this problem exist. I’m pleased to be working with them.”

Mr Nicolson added: “The current approach to anonymity makes life too easy for trolls, bullies, and spreaders of dangerous falsehoods, and the rest of us are paying the price.”

Writing for the Sunday Express, Stephen Kinsella, founder of Clean Up the Internet, said: “It’s not just MPs, footballers, or celebrities who suffer.

“Over a quarter of UK social media users have been on the receiving end of bullying, harassment, or abuse, much of it from anonymous accounts.

“And even those of us who are not targeted directly still have to put up with the toxic tone of so much online debate.

“I founded the organisation Clean Up The Internet because I was sick of seeing online debates ruined by trolling and misinformation, and sick of seeing others being threatened and bullied.”