WASHINGTON — Alejandro N. Mayorkas opened a 2016 speech on immigration by recounting his personal connection to the subject — his story of being a political refugee. Then it took only minutes for Mr. Mayorkas, the deputy secretary of homeland security at the time, to address criticism of his department’s immigration record.

“Many have taken great issue with the administration’s removal of individuals who have not qualified for refugee status or asylum status in the United States and our practice of removing those who have not qualified for relief under law,” Mr. Mayorkas said during the address at Georgetown Law. “Whether we expand the basis of which we seek to welcome these individuals fleeing for a better life is a question that is answered by thinking of who we want to be as a country.”

His remarks not only highlighted some of the experiences that prompted President-elect Joseph R. Biden Jr. to name him homeland security secretary last month — fleeing Cuba during the Castro revolution to come to the United States, where he rose to U.S. attorney for Southern California — but they also foreshadowed one of the first dilemmas he will most likely face at the helm of the department.

There are early indicators that migration will swell at the southwestern border, presenting the Biden administration with an early test of human consequences. In November, border officials apprehended a child crossing the border alone 4,467 times. That is a slight drop from the 4,661 in October, but a stark increase from the 712 recorded in April, when various countries imposed national lockdowns and the Trump administration invoked a public health emergency rule to put new border restrictions in place.

Nearly all of the 70,052 arrests at the border in November involved a lone migrant adult, whom border officials can still rapidly return to Mexico under the public health rule. But immigration experts have pointed to two recent hurricanes that devastated Central America as well as the pandemic’s damage to the economy in warning that the United States in the coming months will most likely face the question of what to do with parents and children crossing the southwestern border in search of protection.

The new administration’s approach to the issue will be expected to balance the demands of the left for more lenient immigration policies with the concerns of moderates and law enforcement officials who believe any show of tolerance could lead to an uptick in illegal migration.

“On the one hand, they get pressure from the right that you’re just giving amnesty and letting all these illegals in and from the left that you’re being too tough,” said Janet Napolitano, a homeland security secretary under President Barack Obama. “And the challenge is to enforce the rule of law and to do it intelligently.”

The Trump administration has sought to restrict the ability to obtain asylum through myriad regulations and policies, including one that forces migrants to wait in Mexico for decisions in their cases rather than be released into the United States.

The United States has also cited public health authority granted to the Centers for Disease Control and Prevention in empowering border officials to rapidly “expel” migrants at the border back to Mexico or their home countries without hearing their asylum claims. That policy has had the unintended consequence of encouraging migrants to repeatedly cross the border illegally.

A federal judge in November blocked the administration from applying the rule to migrant children at the border, a decision that departing Trump administration officials have said will fuel migration north.

While Mr. Biden has not said whether he will lift the public health restrictions, he has said he will end the “remain in Mexico” policy that has forced tens of thousands of migrants back across the border. 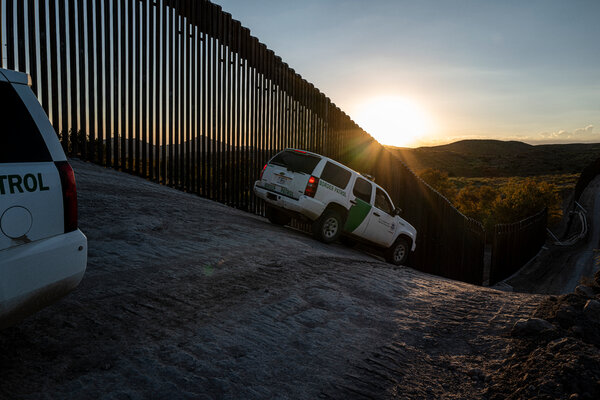 In October and November, the Border Patrol detained about 150 migrant children a day at the southwestern border, compared with about 80 a day in the fiscal year that ended on Oct. 1, according to the agency. The more than 4,600 detentions of children at the border in November is still fewer than the 5,615 arrests recorded in 2016.

Mr. Biden has said he will cut funding used to detain migrants and instead rely on programs that track them after they are released into the United States to ensure they appear in court. His transition team focused on immigration has in recent weeks discussed surging asylum officers to the border to process more cases, as well as lobbying Congress for additional bed capacity at the Office of Refugee Resettlement at the Department of Health and Human Services, according to interviews with advisers.

After children are detained at the border, they are required by law to be moved to shelters managed by the department within 72 hours. They are then supposed to be matched with relatives acting as sponsors or placed in foster care facilities. The refugee office has about 3,300 children in its custody out of roughly 8,700 slots that have been made available during the pandemic, according to a statement from the agency.

Both the Trump and Obama administrations have been criticized for the care children received in border facilities and for how long it took to transfer them to health and human services.

In 2014, the demographic at the border shifted from single Mexican adults, who can be quickly deported, to Central American families and unaccompanied children seeking asylum. Those families by law cannot be quickly deported because they had not traveled from a neighboring country.

The Obama administration responded by expanding the number of detention facilities for families, converting a warehouse in McAllen, Texas, into a facility that could hold more than 1,000 migrants in chain-linked enclosures. Mr. Mayorkas was confirmed as the deputy secretary of homeland security in December 2013 after leading Citizenship and Immigration Services, which oversees legal immigration.

“I think he knows well the way the administration handled the 2014 crisis fell short,” Doris Meissner, the immigration commissioner in the Clinton administration, said of Mr. Mayorkas. And under Mr. Trump, asylum processing has been effectively “shut down.”

“How do you unwind from that but put a system in place that actually makes it possible to have border control, as well as a system for adjudicating protection claims that is fair and timely?” Ms. Meissner said.

Mr. Biden’s advisers have said that the new administration will recommit to restoring the asylum process. But it remains unclear how he will combat a backlog of more than one million cases in the immigration court system that has left immigrants waiting for years in the United States for decisions.

The Trump administration added another hurdle for Mr. Biden last week, when it completed sweeping rules that restrict the eligibility criteria for asylum seekers and that direct asylum officers to deny most claims based on domestic abuse or gang violence.

Immigration advocacy organizations have called for Mr. Mayorkas not only to roll back those policies, but to revamp a system at the border that has been the point of contention for multiple administrations.

But he has walked the tightrope when faced with those questions before.

When Mr. Mayorkas finished his speech at Georgetown in 2016, an audience member pressed him on whether the Obama administration’s funding for detention centers allowed it to prevent “undue suffering from the family separation and community disruption that immigrant detention inevitably causes.”

“Things are in tension. Many have expressed profound concern with the detention of families, with the detention of children,” Mr. Mayorkas said, while also acknowledging the concern of deportation officers who had warned that some migrants would not appear at their court hearings if they were released. “Where one comes out on that, one has to give due consideration to all of the factors and answer it fundamentally with what you think is most important.”