Home » Politics » For Buttigieg, ‘Generational’ Transportation Change May Not Be Easy, Experts Say

WASHINGTON — Now that Pete Buttigieg is secretary of transportation, he faces a challenge: delivering on his promises of infrastructure overhaul.

During his Senate confirmation hearing, he said there was a “generational opportunity” to change infrastructure. In a string of news appearances over the past month — including ABC’s “The View” and an interview with the actor Chris Evans — Mr. Buttigieg said that climate change, racial justice and job creation could all be addressed through infrastructure overhaul.

We “have a historic opportunity to take transportation in our country to the next level,” he said on Mr. Evans’s show, “A Starting Point,” which interviews elected officials and policymakers. “We should actually be using transportation policy to make people better off, make it easier to get to where you’re going, easier to get a job, easier to thrive.”

His statements have generated excitement among transportation experts, who are unaccustomed to seeing the secretary of transportation adopt a news strategy to communicate about the nation’s infrastructure. But deep institutional change remains difficult, and reform will not come easy, they said.

“It’s an exciting time,” said Paul Lewis, the vice president for policy and finance at the Eno Center for Transportation, a nonpartisan transit research center in Washington. “But I do think a lot of the big things — the reform efforts — are going to take more time and effort than a lot of people are expecting.”

Mr. Buttigieg now takes charge of a department that has oversight of the nation’s airways, railroads, highways, pipelines and shipping infrastructure. His department’s rule-making powers and its budget of around $87 billion provide Mr. Buttigieg with influence on how Americans safely travel and transport goods across the country.

In an email to colleagues on Wednesday, Mr. Buttigieg outlined his goals to the more than 55,000 employees in the department.

“I envision our department playing a central role in the vital, national project of building America’s economy and infrastructure back better,” Mr. Buttigieg wrote. “We will break new ground: in ensuring that our economy recovers and rebuilds, in rising to the climate challenge and in making sure transportation is an engine for equity in this country.” 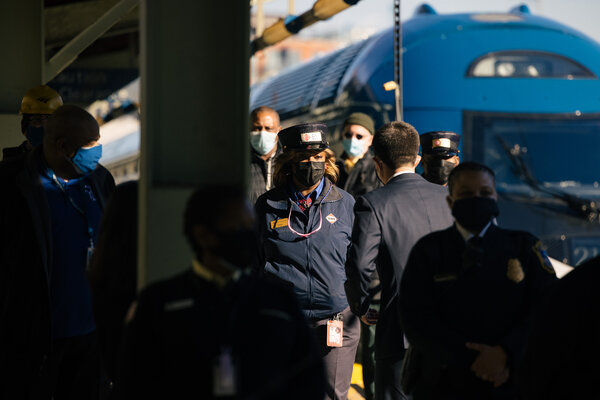 On Friday, in his first in-person event as secretary of transportation, he met with workers from Amtrak and commuter rail transit systems at Washington’s Union Station to reinforce his support for Mr. Biden’s executive order that mandates masks on certain modes of interstate travel and to urge lawmakers that the United States needed to rebuild the nation’s infrastructure “better than before.”

Despite these stated goals, Mr. Buttigieg is constrained.

Large chunks of the department’s budget, including much of the nearly $47 billion that is allocated for roads and public transit, is controlled by funding formulas set by Congress. Any hopes to significantly overhaul the nation’s infrastructure — which has become a perennial joke on Capitol Hill — would require significant negotiation with federal lawmakers.

Transit advocates and former government officials said that Mr. Buttigieg’s profile in the news media and the favorable bipartisan reception he received last month at his Senate confirmation hearing give them reason to believe he could achieve change, but there are still other factors to consider.

“I think he’s got the skills,” said Beth Osborne, the director of Transportation For America, an advocacy group. “The question is: How much priority are these things going to get and will the White House give him backing?”

Timing is also an issue. Democrats are in control of the White House and both chambers of Congress, but pushing through a version of Mr. Biden’s $2 trillion infrastructure reform plan could become difficult if it does not happen this year, political analysts caution, because the midterm elections in 2022 could change the political calculus for lawmakers.

On Friday, Mr. Biden indicated that infrastructure overhaul would be a priority this year for his administration and that he “can hardly wait” to sit down with Representative Peter A. DeFazio of Oregon, the top Democrat on the Transportation and Infrastructure Committee, to start the effort.

Mr. LaHood added: “He needs to really develop relationships now to help President Biden get his legislative agenda through Congress very quickly. He needs to start meeting with DeFazio and the White House.”

There are some areas where Mr. Buttigieg is expected to make changes, including the department’s $1 billion BUILD grant program that funds road, rail, transit and port projects across the country. Mr. Buttigieg has broad control over developing the criteria for what makes those project proposals competitive for funding, former transportation officials said, and it is a place where transportation secretaries of both parties have commonly identified their priorities.

Experts said road projects that are climate-friendly, such as those that encourage bike lanes and bus travel, were likely to get higher priority for funding under the Biden administration. Projects that support sidewalks in distressed neighborhoods or cheaper transportation costs for low-income workers, could also become more competitive, they said. Under the Trump administration, the department often prioritized projects that increased car use.

Addressing issues of race and climate through the Transportation Department could provide Mr. Buttigieg some difficulty. Senator Bill Hagerty, Republican of Tennessee, was one of 13 senators to vote against Mr. Buttigieg’s confirmation because he said the secretary would “use the department for social, racial and environmental justice causes,” instead of focusing on “streamlining environmental reviews for projects or other deregulation efforts.”

Another area where transportation secretaries can exert control is through federal rule-making. Under the Trump administration, the department prioritized deregulation and private-sector collaboration. Under Mr. Biden, transit advocates are lobbying Mr. Buttigieg to enact rules that reduce greenhouse gas emissions, promote rail service in rural communities and require projects to better measure a community’s access to jobs and essential services through public transit.

“The mechanics of this stuff may seem dull,” said Ben Fried, a spokesman for TransitCenter, a transportation philanthropy. “But the cumulative effect can be big.”

One topic Mr. Buttigieg is expected to address is the Gateway project, which is a program that seeks to build tunnels under the Hudson River for Amtrak and commuter trains. Approval of the project stalled during the Trump administration. Mr. Buttigieg, in his confirmation hearing, said he would work with lawmakers from the Mid-Atlantic to “move forward” on it.

And as Mr. Buttigieg takes charge of the nation’s transportation agency, transit experts and former officials said they wanted to see how his following, and reported ambitions for higher office, would affect his approach to the role. “I don’t think the Biden administration would have picked Pete Buttigieg if they wanted him to be quiet and stay in line,” said Mr. Lewis of the Eno Center for Transportation. “That’s just not his style.”

Others said Mr. Buttigieg’s approach to rule-making and regulation changes, more so than his public statements, would be how they judge his effect. “Do they create big messaging events with no substance behind it? With no actual change?” said Ms. Osborne, of Transportation for America. “I am looking for substantive action.”