WASHINGTON — When Johnson & Johnson’s single-dose coronavirus vaccine was authorized for emergency use in late February, ​it was seen as a breakthrough for reaching vulnerable and isolated Americans, a crucial alternative to vaccines that require two shots weeks apart and fussier storage. It was soon popular on college campuses, in door-to-door campaigns and with harder-to-reach communities that often struggle with to access health care.

But with only 11.8 million doses administered in the United States so far — less than 4 percent of the total — the “one and done” vaccine has fallen flat. States have warned for weeks that they may not find recipients for millions of doses that will soon expire, partly because the vaccine’s appeal dropped after it was linked to a rare but serious blood-clotting disorder and injections were paused for 10 days in April.

The vaccine took another hit last week, when regulators told Johnson & Johnson that it should throw out tens of millions of additional doses produced at a plant in Baltimore because they might be contaminated. The diminished supply and enthusiasm for the shot mean that its role in the United States is fading fast, even though millions of Americans have yet to be vaccinated.

“It’s just not what I think anybody would have hoped it would be when it came out,” said Dave Baden, the chief financial officer of the Oregon Health Authority.

Health officials in a number of other states presented a similarly discouraging picture. The pause on the Johnson & Johnson vaccine, they said, effectively kicked it aside for good; only about 3.5 million doses have been used since the pause was lifted on April 23. Kim Deti, a spokeswoman for the Wyoming Health Department, said the graph of uptake in her state told the vaccine’s story: a significant climb in the early weeks of its rollout, followed by a plateau that began around the pause.

State officials had initially hoped the Johnson & Johnson shot would be a workhorse: a versatile, easy-to-store tool they could stockpile at mass vaccination sites, quickly reaching thousands of people they would not need to track down for a second dose. But after demand dropped, their goals grew more modest.

It is being used in a smaller-bore fashion this week at the Fiesta festival in San Antonio, the College World Series in Omaha, a Juneteenth celebration in Johnstown, Pa., and an aquarium in Long Beach, Calif. At a food bank in Reno, Nev., 12 doses of the Johnson & Johnson vaccine were administered on Thursday, said Jocelyn Lantrip, the director of marketing and communications for the Food Bank of Northern Nevada. 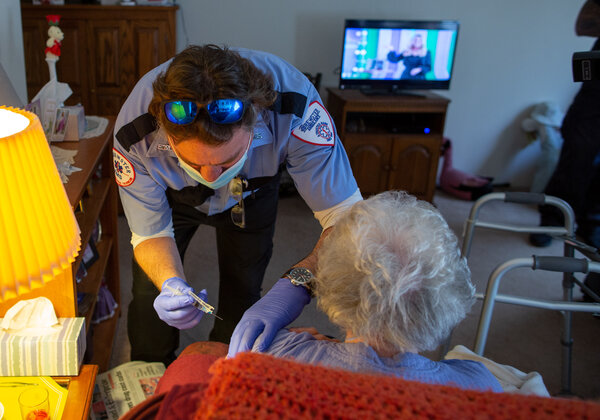 Between the small number of doses distributed and the lack of interest in them, public health experts say, the United States missed a critical opportunity to address health disparities with a vaccine that should have been ideal for reaching vulnerable populations. Dr. Chip Riggins, a regional medical director who oversees vaccine events in south central Louisiana, said that few organizers requested the shot anymore, even in a state with one of the lowest vaccination rates in the country.

“In the early days of J&J, working with the African American community and the churches, the faith community here, it was a very, very popular option,” Dr. Riggins said. “It pains me that it isn’t being accepted like it was before the pause.”

Dr. José R. Romero, the Arkansas health secretary, called the shot’s fast decline a “lost opportunity” for reaching the vulnerable in his state.

“This is a vaccine that was very well-suited for populations where we have problems getting into,” he said. “We’re now at the point where it’s five people or three people; it doesn’t matter, we’ll open a vial.”

Dr. Riggins said he had limited success in recent months sending the vaccine to churches, casinos and even gas stations, including one in LaPlace, La., where organizers offered the shot on Thursday. An international crew on a ship was elated to receive their shots last weekend, Dr. Riggins said. But not being able to fully protect more people with just a single dose, he added, was hindering the state’s progress.

Johnson & Johnson’s decline in the United States has dovetailed with decreasing demand for Covid vaccines overall. Nearly 30 million doses of the Pfizer-BioNTech vaccine are sitting unused, as are about 25 million of Moderna’s. But a total of 135 million people have been fully immunized with those vaccines, 11 times more than with Johnson & Johnson’s. The two-dose vaccines have a higher efficacy rate overall — roughly 95 percent versus 72 percent for Johnson & Johnson’s — but studies showed that all three were highly effective at preventing hospitalization and death.

Alex Gorsky, Johnson & Johnson’s chief executive, said last week that he was still hopeful that the vaccine, which has been used in 26 countries so far, would help contain the pandemic overseas. The company has promised up to 400 million doses to the African Union. Separately, Covax, the global vaccine-sharing program, is supposed to receive hundreds of millions of doses.

“We still believe that this is going to be a very important tool in the overall armamentarium,” Mr. Gorsky said at an event hosted by The Wall Street Journal.

But manufacturing problems at a factory in Baltimore run by Emergent BioSolutions, Johnson & Johnson’s subcontractor, have had serious consequences for the vaccine. Because of a major production mishap that resulted in a two-month shutdown in operations, Johnson & Johnson has essentially been forced to sit out the brunt of the pandemic in the United States while Pfizer and Moderna, the other federally authorized vaccine makers, provided almost all the nation’s vaccine stock.

Johnson & Johnson has had to throw out the equivalent of 75 million doses, and the regulatory authorities in Canada, South Africa and the European Union also decided to pull back millions more doses made at the Baltimore plant. The company has been able to deliver only one-fourth of the 100 million doses it promised the federal government by the end of this month.

Dr. Anne Zink, Alaska’s chief medical officer, said that in her state, Johnson & Johnson’s shot had become a victim of its own timing. By late February, when it was authorized by the Food and Drug Administration, Alaska had figured out how to get two-dose vaccines to remote areas, leaving the one-shot regimen less crucial than she had initially imagined.

Dr. Clay Marsh, West Virginia’s Covid-19 czar, said that the pause and Johnson & Johnson’s later authorization — more than two months after Pfizer’s and Moderna’s — deprived it of a “halo effect.” By the time West Virginia had an ample supply of all three vaccines, he said, “people started to get this concept that maybe there’s something better about being immunized with Pfizer and Moderna.”

The Johnson & Johnson shot had also suffered from a “social network effect,” said Andrew C. Anderson, a professor of public health at Tulane University who researches vaccine hesitancy. Most Americans who were inoculated in the early months of the vaccine campaign received Moderna and Pfizer shots, and so their friends and family were less likely to deviate and accept a different brand.

In Louisiana, hospitals in the New Orleans area have started offering the Johnson & Johnson shot to people on their way out of the emergency room; the thinking is that people will be more likely to accept the vaccine when a doctor who has treated them asks them to take it. And in Arkansas, where only a third of the population is fully vaccinated, state officials are offering Johnson & Johnson doses to agriculture, manufacturing, wastewater and poultry workers, with gift certificates for hunting and fishing licenses as a reward.

“I don’t think that the book on J&J is closed,” said Dr. Joseph Kanter, Louisiana’s top health official. “It’s just not going to be a game changer.”

In West Virginia, officials are now hoping to use up some 20,000 doses of the shot at summer fairs and festivals and in parks, Dr. Marsh said. And in Oregon, Mr. Baden, the state health authority official, said that providers were working to exhaust about 150,000 doses in correctional facilities and higher-throughput sites in Portland. The sharp drop in interest, he said, was “tragic.”

Onisis Stefas, the chief pharmacy officer at Northwell Health, New York State’s largest health care provider, said he was still working through the system’s original allocation of Johnson & Johnson from March — a sign that demand had shriveled long ago. Doctors’ offices have asked for as few as 10 doses at a time instead of the pack of 50 the vaccine typically comes in.

In Michigan, where more than 200,000 Johnson & Johnson doses sit unused, officials are racing to redistribute the vaccine to high-volume sites in hopes of administering them before they expire.

“It’s just kind of one after another negative news about the vaccine,” said Dr. Joneigh S. Khaldun, the chief medical executive in the state.