DALTON, Ga. — Kelly Loeffler is not just a United States senator and a successful businesswoman. She is also one of the social doyennes of Buckhead, the Atlanta neighborhood of the wealthy and aspiring rich, where she has often thrown open the gates of her $10.5 million European-style manse, known as Descante, for charity fund-raisers.

The role requires maintaining a certain unruffled poise. So it was impossible to know what Ms. Loeffler was thinking as she rolled up to a brewpub in Dalton, Ga., in late August for a campaign event and was greeted by Marjorie Taylor Greene, a fellow Republican who had just won a House primary after promoting the QAnon conspiracy theory and making offensive remarks about Black people, Jews and Muslims.

Ms. Loeffler and Ms. Greene exchanged pleasant chitchat near the front door. Later, Ms. Loeffler, who was appointed to her seat last year and must win an upcoming special election to keep it, grabbed a microphone and talked about finishing the wall on the Mexican border, the “fake news” that would never intimidate her and the “dangerous Marxist movement called the Black Lives Matter political organization.”

A reporter asked Ms. Loeffler whether she supported Ms. Greene, and whether she denounced QAnon.

“Marjorie is fighting to defeat socialism; that’s what I’m focused on,” Ms. Loeffler said, adding, “I just thank her for coming out.”

It is a long way from hosting soirees at Descante to joining forces with a right-wing conspiracy theorist at a beer hall. But it is a journey that Ms. Loeffler has undertaken in earnest as she seeks to conform to the tastes of Donald Trump’s Republican Party — just one of the many establishment Republicans who have embraced Trumpism in recent years.

For Ms. Loeffler, a political newcomer, the journey has meant breaking with old allies, picking new fights and struggling to explain away a life before politics when she occasionally gave money to Democrats, like former Senator Tom Harkin of Iowa, and rubbed elbows with Stacey Abrams, the Democrat who ran for Georgia governor in 2018. And her harsh criticism of the Black Lives Matter movement has run afoul of a longstanding convention in her adopted hometown, sometimes referred to as the Atlanta Way, in which the white corporate class has cultivated a level of solidarity with the city’s African-American leaders and civil rights movement.

In and around Buckhead, a version of the same question has been discreetly raised among some members of the senator’s social circle: What happened to Kelly Loeffler? 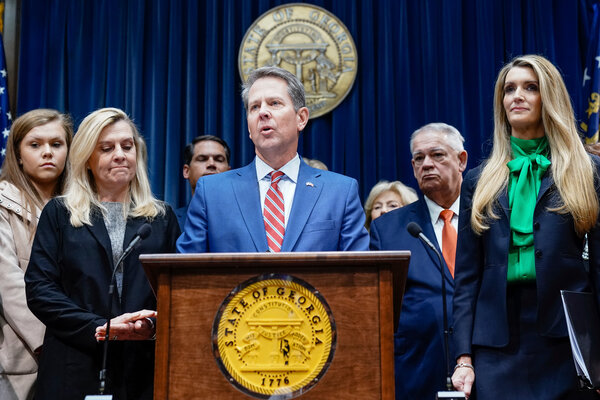 In December, Gov. Brian Kemp, a Republican, named Ms. Loeffler, 49, to replace Senator Johnny Isakson, who had resigned for health reasons. Her appointment was widely interpreted as an effort to make the Georgia Republican Party more palatable to middle-class moderates, especially educated women in the Atlanta suburbs who have been abandoning the party in the Trump era.

The appointment is short; Ms. Loeffler has to defend her seat in a special election on Nov. 3. As the incumbent carrying the governor’s blessing, however, she seemed to have an edge on opponents.

But President Trump had made it known that he wanted Mr. Kemp to appoint Representative Doug Collins, a hard-charging conservative who defended Mr. Trump at his impeachment. Soon Mr. Collins, too, jumped in the race.

The special election will not be preceded by primaries. Rather, it will be a free-for-all pitting the Republican candidates against a number of Democrats, including the Rev. Raphael Warnock, who pastors the Atlanta church once led by the Rev. Dr. Martin Luther King Jr., and Matt Lieberman, the son of former Senator Joe Lieberman of Connecticut.

If no candidate earns a majority of the votes, the top two vote-getters will face off in a January runoff, which has set up a primary-like atmosphere for Ms. Loeffler and Mr. Collins, with each trying to out-conservative the other, and Ms. Loeffler cultivating a new image as a right-wing firebrand.

The change in Ms. Loeffler’s public persona has been striking. She is married to Jeffrey C. Sprecher, the chairman of the New York Stock Exchange. As a spokeswoman for Intercontinental Exchange, the commodities and financial exchange company Mr. Sprecher founded in 2000, her name appeared regularly on business-wire news releases. In 2011, when she became a co-owner of the Atlanta Dream, the city’s W.N.B.A. franchise, she was praised, in local news stories, for supporting women’s athletics.

The couple’s names appeared on lists of charity donors, their photos on websites from fund-raising galas. In 2011, they planned an event for Mitt Romney, the 2012 Republican presidential candidate, who has since become a villain among Trump supporters for voting to convict the president during his Senate impeachment trial. (Ms. Loeffler was also named, in 2012, to Mr. Romney’s Georgia finance team.)

That was then. On Sept. 19, Ms. Loeffler posted on Twitter that she had just been in Ringgold, Ga., with Ms. Greene at a rally with “Patriotic Georgians.” One photo she posted showed the two women in the presence of camouflage-wearing members of the Georgia III% Martyrs, a far-right militia group, one of whom was carrying a military-style rifle.

But Mr. Collins, 54, may prove difficult to out-conservative. The son of a state trooper who hails from the northeast Georgia city of Gainesville, he has an A-plus rating from the National Rifle Association and a master’s in divinity from a Baptist seminary. In recent months, he became a hero among Trump supporters, including the Fox News host Sean Hannity, for his spirited defense of the president during his impeachment proceedings.

Consider the way the two candidates responded to the death of Justice Ruth Bader Ginsburg. While Ms. Loeffler said on Fox that the Senate should vote on Mr. Trump’s choice to fill the seat “regardless of it being an election year,” she also offered her “prayers” for Ms. Ginsburg’s family during a difficult time.

Mr. Collins, in contrast, marked the passing of Ms. Ginsburg in a tweet that said, “RIP to the more than 30 million innocent babies that have been murdered during the decades that Ruth Bader Ginsburg defended pro-abortion laws.”

Online, Mr. Collins’s campaign has taken aim at Ms. Loeffler’s big Buckhead mansion, and lampoons her use of a private jet with the Twitter handle @AirLoefflair, in keeping with a Georgia populist tradition that frustrated the political ambitions of the Buckhead grandee Guy Millner (who ran for statewide office three times and lost), and catapulted Jimmy Carter to the governorship in 1970 after his campaign referred to his wealthy opponent, Carl Sanders, as “cuff links Carl.”

Mr. Collins’s first broadcast television ad accuses Ms. Loeffler of making “slick ads telling lies,” and touts his record of defending the president. The Collins team has also called Ms. Loeffler an “insider trading profiteer” for a stock-trading episode in which the couple reported millions in transactions just after senators received a private briefing on the impacts of Covid-19. The Justice Department informed Ms. Loeffler in May that it would not pursue insider trading charges, and Ms. Loeffler has denied doing anything wrong.

Then there is the problem of what the Collins campaign calls the “liberal basketball team,” the Atlanta Dream. The Collins team says the basketball team has worked with Planned Parenthood, partnered with a gun control group and hosted a courtside event for Ms. Abrams.

At the same time, Ms. Loeffler is facing a revolt from the Dream’s players. The team name is an overt nod to Martin Luther King Jr.’s most famous civil rights speech, and most of its players are Black. When the W.N.B.A. dedicated its season to Black Lives Matter, Ms. Loeffler wrote a letter to the league’s commissioner saying she was opposed because the movement “advocated for the defunding of police” and accused B.L.M. of promoting “violence and destruction.”

In response, W.N.B.A. players, led by members of the Dream, began wearing T-shirts declaring “Vote Warnock,” a reference to the Democratic preacher running against Ms. Loeffler.

Ms. Loeffler has the benefit of self-funding, to the tune of at least $15 million. Her ads have drawn attention to her constituent services and attacked Mr. Collins for a “politically correct” 2010 vote for a bill that would have outlawed carrying a gun into private schools.

She has also used her ads to underscore her right-wing credentials. One recent spot riffs humorously on the conceit that Ms. Loeffler is “more conservative than Attila the Hun.” In it, an actor playing Attila, speaking in a grunting, made-up language, dictates a to-do list to an underling. The list includes “attack big government” and “eliminate the liberal scribes.”

Ms. Loeffler’s run-to-the-right strategy appears to be working so far, at least among Republicans: A poll released on Sept. 29 by Quinnipiac University showed her leading Mr. Collins by a point, 23 percent to 22 percent, though Mr. Warnock led the field with 31 percent, evidence that Democratic voters are consolidating behind him.

A previous poll, conducted in mid-September by The New York Times and Siena College, showed Ms. Loeffler ahead of the pack of candidates, with 23 percent support. The poll showed Mr. Collins with 19 percent support, tied with Mr. Warnock, while 27 percent of respondents said they were undecided.

At the campaign stop at the Dalton brewpub, about 80 miles north of Atlanta, Ms. Loeffler, decked out in dark jeans and western boots, demonstrated how she harmonizes the disparate elements of her persona — as a “proud supporter of President Trump” married to a man who collects Basquiats, and as a hard-right populist and self-proclaimed “outsider” who is also one of the wealthiest people ever to serve in Congress.

She spoke of the work ethic she learned on her family’s Illinois farm, and how such values had allowed her rise from obscurity. And she spoke about the nefarious forces that would close the door on such dreams.

“This election is about a choice,” she said. “This is about the things that make America the greatest, most exceptional country in the world, or a divided America, one that destroys opportunity, hope — the American ideal that we all strive for.”

Joe Biden is traveling to Florida today and will visit Arizona later this week, in a push to expand his electoral map. Read the latest updates.

All eyes on Texas as early voting surge surpasses 2016