The president’s advisers want him to present an affirmative vision for the country. Joe Biden’s team is bracing for ugly attacks. 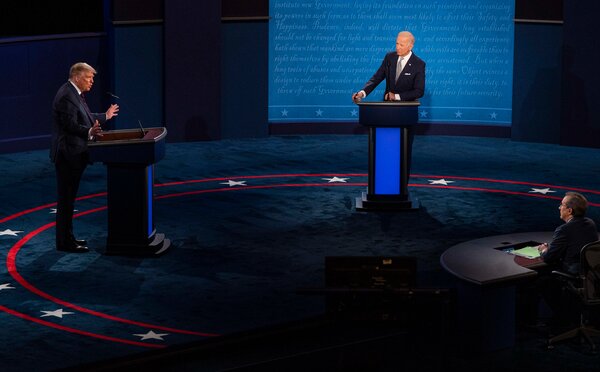 By Katie Glueck and Maggie Haberman

Three weeks after a debate spectacle defined by heckling and sharply personal attacks, Joseph R. Biden Jr. and President Trump will meet again on Thursday in the last major prime-time opportunity for Mr. Trump to try to change the trajectory of the race before Election Day.

Republicans would like to see the president offer an affirmative vision for the country and draw policy contrasts with Mr. Biden in terms that resonate with the few undecided voters remaining. But Mr. Trump, with his history of indiscipline and invective, has struggled to define Mr. Biden this year — and he is running short on time.

The debate comes 12 days before Election Day, as many Americans have already cast ballots, and as polls show the president trailing nationally and confronting close races even in states he won handily four years ago.

Mr. Trump’s advisers hope that he can get under Mr. Biden’s skin on Thursday at the debate in Nashville, which will begin at 9 p.m. Eastern. But they have also urged the president not to interrupt Mr. Biden repeatedly, after a first contest in which Mr. Trump constantly hectored his rival — and Mr. Biden told him to “shut up” — as the evening spiraled out of the moderator’s control.

The president has signaled he intends to focus on Mr. Biden’s son Hunter and his business dealings, after an unsubstantiated New York Post report on that subject. But some advisers fear he will not be able to control himself and will attack the younger Mr. Biden in a way that engenders sympathy for the Biden family, a dynamic that unfolded in the first debate when Mr. Trump mocked Hunter Biden’s history of battling drug addiction.

“The president, in order to have a successful debate, has to go on offense without being offensive,” said Brett O’Donnell, a Republican strategist who has coached candidates in debates. “The American people care more about their own family than they do about the family of Hunter Biden. Especially during the pandemic.”

Mr. Trump has spent days attacking the Commission on Presidential Debates, which organizes the events and announced this week that the microphones of both candidates would be muted at times, as well as the moderators the commission has chosen. In an interview with “Fox and Friends” on Tuesday morning, the president continued along that path, but suggested he was listening to his advisers for now.