The SNP Westminster leader accused the Prime Minister and the Conservative Party of being “a real disaster” for Scotland after Boris Johnson was reported to have claimed devolution was “Tony Blair’s biggest mistake”. But Boris Johnson promptly dismantled Mr Blackford’s accusation as he reminded the House the SNP wants to “surrender power to Brussels” with Scottish independence.

But Mr Blackford said the Prime Minister’s comments this week about devolution were “not just flippant remarks”.

“The chasm between Westminster and the Scottish people has never been bigger. We know that these were not just flippant remarks when Scotland faces the biggest threat to devolution with the Tory power grab bill.

“The fact is Scotland has been completely ignored by Westminster. We now face an extreme Brexit, a power grab and another round of Tory cuts all being imposed against our will by a Tory Government that we didn’t vote for. 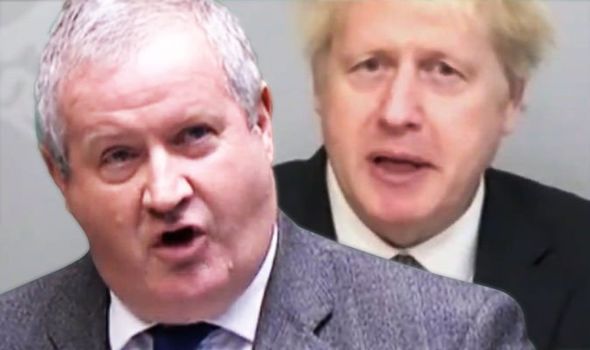 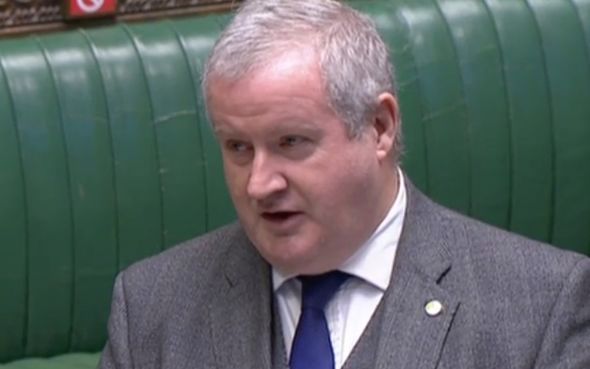 “Isn’t it the case that the real disaster facing the people of Scotland is another 20 years of Westminster Government? Isn’t clearer than ever that the only way … to protect Scotland’s interests, our Parliament and our place in Europe is for Scotland to become an independent country?”

Boris Johnson replied: “I could not disagree with the honourable gentleman more.

“He is totally wrong. What the UK does as a whole is far, far bigger, better and more important than what we can do as individual nations and regions.

“I think, actually, when you look at the way the UK has pulled together during this pandemic, the way the armed services have worked to get testing throughout the whole of the UK, the way that the furlough scheme has been deployed across the UK.

“The billions and billions that have been found to help people across the whole of the UK, businesses in Scotland, in Wales, in Northern Ireland, in England, I think that the UK has shown its value and will continue to show its value.”

Sir Keir Starmer said: “Devolution in Scotland, Wales and Northern Ireland is one of the proudest achievements of the last Labour government. Until now, whatever our disagreements, there has been a very broad consensus about devolution.

“So why did the Prime Minister tell his MPs this week that Scottish devolution is, in his words, a disaster?”

Mr Johnson replied: “I think what has unquestionably been a disaster is the way in which the Scottish National Party have taken and used devolution as means not to improve the lives of their constituents, not to address their health concerns, not to improve education in Scotland, but constantly – and I know this is actually a point of view that is shared by (Sir Keir Starmer) – but constantly to campaign for the break-up of our country.

“To turn devolution, otherwise a sound policy for which I myself personally benefited when I was running London – but turn devolution into a mission to break up the UK.

“That, in my view, would be a disaster.”

Sir Keir added that “the single biggest threat to the future of the United Kingdom is the Prime Minister every time he opens his mouth”.

He continued: “When the Prime Minister said he wanted to take back control nobody thought he meant from the Scottish people. The Prime Minister’s quote is very clear – he said devolution has been a disaster north of the border.

“This isn’t an isolated incident, whether it is the Internal Market Bill, the way the Prime Minister side-lined the devolved parliaments over the Covid response, the Prime Minister is seriously undermining the fabric of the United Kingdom.

“So, instead of talking down devolution, does he agree that we need far greater devolution of powers and resources across the United Kingdom?”

Mr Johnson added that “there can be great advantages in devolution” and questioned whether Sir Keir Starmer also “opposes the break-up of the United Kingdom”.