This afternoon MPs will debate two motions put forward by the SNP when the party takes control of the Parliamentary agenda. Opposition parties are granted the chance to hold debates on matters of their choice on a small number of days each year.

This afternoon Mr Blackford will force Commons votes on giving consent to a second Scottish independence referendum, and on the impact of Brexit.

The Party has tabled a motion claiming “the immediate economic damage, recent uncertainty and the projected long-term damage to business and trade from the UK leaving the European Union has disproven the perceived benefits of” Brexit.

The vote is non-binding but has been tabled by the SNP in order to make a political point. 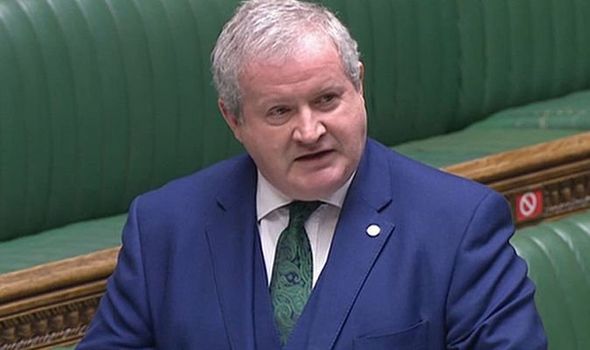 Their decision to hold a debate on the impact of Brexit today comes just weeks before the Scottish Parliament elections on May 6, in which the party is hoping to win a majority in Holyrood.

Scotland voted to remain in the EU by 62 percent to 38 percent in the 2016 referendum with the SNP seizing on the Remain vote to make the case for a new independence referendum.

Ahead of the vote Mr Blackford said: “In the middle of a global pandemic and economic crisis, we have been forced to pay a heavy price for the Tory Government’s damaging Brexit deal which we did not vote for.”

The Conservatives have already tabled an amendment to the motion to reverse its meaning.

Instead, the motion would say the Commons “welcomes the UK-EU Trade and Cooperation Agreement, and recognises the enormous opportunities for Scotland’s economy”.

The Tories have similarly tabled an amendment to the SNP’s motion on the mandate for a new Scottish independence referendum. 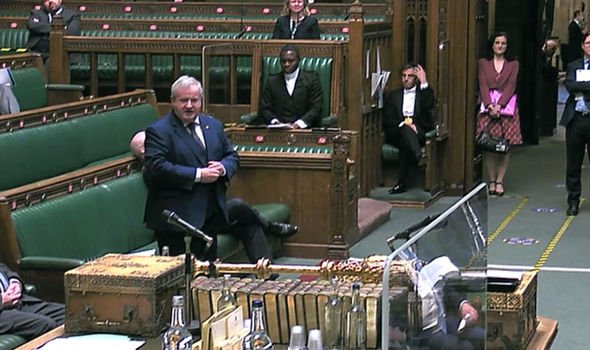 The SNP has tabled a vote this afternoon which claims the Commons “has considered the upcoming Scottish Parliamentary general election and Scotland’s right to choose its constitutional future”.

However, the Government is seeking an amendment to chain the wording to say the House “believes the priority of the Scottish people is to recover from the effects of the Covid-19 pandemic, and that it would be irresponsible to hold a referendum at this time”.

Given the SNP have just 47 MPs in the Commons out of 650, neither the Brexit motion nor the one on a Scottish independence referendum is likely to pass.

However, the debates in the Commons are likely to be high in emotion and bad-tempered.

Tory MPs will also likely use it as an opportunity to speak openly about the SNP rift between Alex Salmond and Nicola Sturgeon.

Yesterday David Davis used parliamentary privilege to raise concerns about the processes surrounding the investigation into the former SNP leader during an adjoornment debate.

Messages disclosed by a whistleblower show there was a “concerted effort by senior members of the SNP to encourage complaints” against Alex Salmond, he claimed.

Md Davis told MPs: “Now Alex Salmond has asserted that there has been, and I quote ‘a malicious and concerted attempt to remove me from public life in Scotland by a range of individuals within the Scottish government and the SNP’ who set out to damage his reputation, even to the extent of having him imprisoned.

“These are incredibly grave charges, the whistleblower clearly agrees with those charges.

“He or she starts their communication with the assertion that the evidence provided, and I quote, ‘point to collusion, perjury, up to criminal conspiracy’.”

A spokesman for First Minister Ms Sturgeon said in a statement: “As with Mr Salmond’s previous claims and cherry picking of messages, the reality is very different to the picture being presented.

“Every message involving SNP staff has been seen by the committee previously. Their views have been widely reported as dismissive of them.”