President Biden’s speech at the U.N. was a stark contrast to President Donald J. Trump’s. But it came amid complaints that some of Mr. Biden’s policy moves echoed his predecessor’s approach. 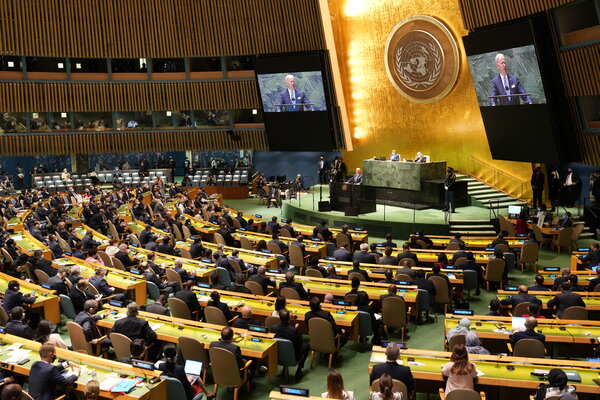 At the United Nations’ annual gathering of world leaders this week, President Biden and Secretary of State Antony J. Blinken spoke ambitiously about international cooperation and a new diplomatic approach for a post-Trump America.

But nearly all their diplomatic efforts at a pared-down U.N. General Assembly were shadowed — and complicated — by the legacy of President Donald J. Trump.

Mr. Biden soothed strained relations with France in a call with President Emmanuel Macron on Wednesday. Mr. Blinken met in New York with his French counterpart on Thursday. But French officials openly likened the Biden administration to Mr. Trump’s in its failure to warn them of a strategic deal with Britain and Australia that they said muscled them out of a submarine contract.

In a fiery address to the global body on Wednesday, President Ebrahim Raisi of Iran suggested that there was little difference between Mr. Biden and his predecessor, invoking their respective foreign policy slogans: “The world doesn’t care about ‘America First’ or ‘America is Back.’”

And in response to the ambitious targets Mr. Biden offered in his address to reduce global carbon emissions, an editorial in Beijing’s hard-line Global Times newspaper raised an all-too-familiar point for Biden officials: “If the next U.S. administration is again a Republican one, the promises Biden made will be very likely rescinded,” the paper wrote — a point the Iranians also made about a potential return to the 2015 nuclear deal that Mr. Trump abruptly exited.

In a news conference capping the week of diplomacy, Mr. Blinken offered a positive assessment. He said U.S. officials had met with counterparts from more than 60 countries and emphasized American leadership on climate and the coronavirus.

Asked about several recent criticisms of U.S. foreign policy, such as the Afghanistan withdrawal, stalled nuclear talks with Iran and diplomatic offense in Paris, the secretary of state said he had not heard such complaints directly in New York this week.