Home » Politics » In Maine, a Race About the Issues Has Become a Referendum on Susan Collins

Two years ago Sara Gideon, the Democratic speaker of the Maine House of Representatives, announced that she was sick and tired of the partisan rancor permeating her state’s government. So she ripped up the seating chart in the 151-member chamber, the one where Republicans and Democrats traditionally glare at each other from across the room, and mixed up the two parties.

Neither party was happy about the plan.

“Virtually every comment I received from people about why they didn’t want to sit in a combined seating arrangement — ‘I want to be comfortable about who I’m sitting next to,’ ‘I want to trust the person sitting next to me,’ ‘I want to feel I can be myself’ — made me realize that this was the only way forward,” Ms. Gideon said in an interview.

State Republicans still grumble that the move isolated them from one another and represented little more than window dressing from a politician who, they say, is partisan when it suits her. But Ms. Gideon, 47, says it brought a new comity to the Statehouse, and her Democratic colleagues now say that it helped foster unexpected cross-party cooperation on tricky pieces of legislation.

“It was incredibly meaningful, because you get to know your seatmates very, very well,” said Heather Sanborn, a state senator who served a term in the House with Ms. Gideon as speaker.

Now Ms. Gideon’s admirers are touting her friendliness, desire for compromise and bipartisan credentials as she seeks to do the once unthinkable: unseat the four-term Senator Susan Collins, one of the last surviving moderate Republicans, and the only Republican from New England, in the U.S. Senate. Not Trumpian enough for many Republicans, too Republican for most Democrats, the once-popular Ms. Collins is unexpectedly vulnerable in this strangest of election years.

Her challenger is a smooth campaigner, fluent and assured about issues like Medicaid expansion, the environment and health care, and skilled in talking about how they affect Mainers. But the country’s partisan divisions are infecting the state, and the local contest is part of a much wider national picture. The race will turn much less on Ms. Gideon’s record, or even her political positions, than on what Maine voters think about Senator Collins. Has she sold her soul to President Trump’s Republican Party?

And so Ms. Gideon is attempting to present herself not just as an effective state politician who is ready for the national stage, but also as the obvious choice for voters alarmed at the president — and, by extension, at Ms. Collins.

“Gideon is charismatic and campaigns well and has a good rapport with crowds,” said Mark Brewer, a professor of political science at the University of Maine. “But the race isn’t primarily about Sara Gideon — it’s much more about Susan Collins.” And of course it is also about Mr. Trump, whose shadowy presence looms in the air at all times, in Maine as across the country.

With the Republicans’ slender Senate majority at risk and millions of dollars of outside money pouring in, it is the most expensive Senate race in Maine history. Ms. Collins won in 2014 with 68.5 percent of the vote, but has consistently lagged in state polls as Maine has turned more firmly against the president. A recent Siena College/New York Times Upshot poll of likely voters showed Ms. Gideon ahead by five percentage points. (The split was 49 percent for Ms. Gideon to 44 percent for Ms. Collins, with 6 percent undecided.) 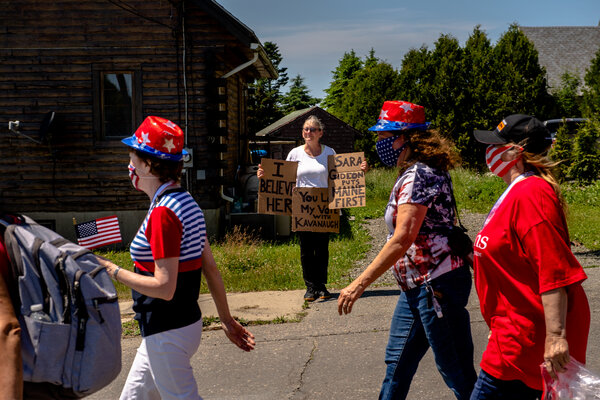 In challenging a seasoned incumbent, Ms. Gideon has played up her own record as a state legislator for the last eight years, half of them as House speaker, a role that is part wheedler, part enforcer, part compromiser. Legislation that she has sponsored, and that has needed Republican cooperation to pass, includes a series of antipoverty bills providing emergency funds to families in need, for instance, and supporting low-income parents seeking college degrees. To address Maine’s opioid crisis, she sponsored a bill to increase access to naloxone, the overdose-reversal drug.

“Sara was always able to work with Republican leaders to make sure those bills were as successful as possible and had bipartisan support,” said Drew Gattine, a Democratic state representative from Portland.

The outsize presence of Paul LePage, the foul-mouthed, tax-cutting, welfare-disdaining, press-hating, anti-immigrant Republican who was Maine’s governor from 2010 to 2018 and who boasted of being “Trump before there was Trump,” complicated matters in the state. Ms. Gideon had to make common cause with more moderate Republican legislative leaders to override the governor’s frequent vetoes, including Michael Thibodeau, the former president of the Republican-controlled Senate.

“One of the most important working relationships Sara built was with Michael Thibodeau,” Mr. Gattine said. “That’s what allowed us to even enact a budget in 2017.”

For his part, Mr. Thibodeau is supporting Ms. Collins in the Senate race. He left office in 2018, and in any case it is hard, in the current climate, to find a Republican legislator willing to admit to working happily with Ms. Gideon.

Indeed, the State Legislature has been all but paralyzed since abruptly adjourning in March because of the coronavirus crisis, with Republicans and Democrats unable to agree on the conditions for returning to Augusta to address a bunch of unfinished business, and each party blaming the impasse on the other. Pandemic-related issues aside, anti-Gideon Republican legislators paint a different picture of the speaker than Democrats do, saying it is not easy being a Republican in a Gideon-controlled chamber.

“Her negotiations tended to be ‘How can I get something?’ rather than ‘How can we work together and have a strong bill coming out of committee?’” said Deborah Sanderson, a Republican who served in the state House of Representatives from 2010 to 2018.

“When it comes to this race between Collins and Gideon, I do not see that Speaker Gideon will vote for anything other than the Democratic Party line,” she said. “Susan Collins has a long history of looking at both sides, of being bipartisan and thoughtful.”

Last week, Ms. Collins tossed an incendiary device into the mix by breaking with the Senate Republican leadership and declaring that the Senate should not consider confirming a nominee to replace Supreme Court Justice Ruth Bader Ginsburg so close to the election; the decision on whom to nominate should be left to whoever is elected on Nov. 3, she said. After initially saying simply that she did not support the party’s nomination timeline, she made her intentions explicit: If it came to a vote, she said, she would oppose the nominee.

Gideon proponents countered that Ms. Collins did not say how she would vote if it came to it and that she had a history of making such statements, sounding independent but then doing what the party wants anyway.

With her remarks, the senator sounded like the Susan Collins who Maine’s voters have repeatedly sent back to Washington. With its population of 1.3 million, America’s easternmost state has long prided itself on its independent-mindedness. Ms. Collins has always embodied that ethos, in the tradition of former Senator Olympia Snowe, a moderate Republican who is now a senior fellow at the Bipartisan Policy Center.

In 2016, Ms. Collins refused to support Mr. Trump, then the Republican presidential nominee, saying that he “does not reflect historical Republican values.” She regularly scores high marks for bipartisan cooperation.

But her detractors say that on important votes the senator often toes the party line. They point to her vote for the president’s 2017 tax cut, which ended the individual health care mandate under the Affordable Care Act, her vote to acquit President Trump in his impeachment trial, and her assertion — which sounds like extreme wishful thinking, given the ensuing events — that “I believe the president has learned from this case.”

What really dismayed former supporters was Ms. Collins’s vote to confirm Brett M. Kavanaugh to the Supreme Court. Explaining her decision, she pointed out that she had voted to confirm judges nominated by three different presidents: George W. Bush, Barack Obama and Mr. Trump. But the damage was done.

“It’s clear that Sen. Collins is not the leader she once was, particularly when it comes to reproductive health and rights,” Margot Milliken, chairwoman of the Planned Parenthood Maine Action Fund board of directors, wrote at the time.

A slew of organizations that once supported Ms. Collins, including unions, environmental groups and gun control advocates, have now endorsed Ms. Gideon.

“Because Senator Collins is a 24-year Senator, you can see how Mainers have voted for her in the past, and how that transcends even party politics,” Ms. Gideon said in the interview. “But you can also see how very different this race is from any other time since 1996.”

Mainers are saying, she continued, “that Susan Collins doesn’t seem like the person who she was when we first sent her to Washington.” And they are saying that “it feels that she’s making decisions for someone’s interests, but not ours,” Ms. Gideon said.

Not so, said Felicia K. Knight, a former communications director for Ms. Collins in Washington who now works as a public-relations strategist in Maine. In a shrill and increasingly binary environment, she said, Ms. Collins has always been thoughtful, principled and able to look at all sides of an issue.

“Nuance is lost on an outraged public,” Ms. Knight said, “and Susan Collins is someone who has built a career on it.”

In a Senate candidates’ debate earlier this month, Ms. Gideon tried her best to saddle her opponent with the unwelcome mantle of Mr. Trump by goading Ms. Collins into revealing whom she planned to vote for in November. “She has neglected to answer that question,” the speaker said.

Although state Republicans contend that Ms. Collins is in fact a Trump adherent, the senator has repeatedly declared that she will not say one way or the other. In the debate, she stuck to her position.

“I don’t think the people of Maine need my advice on whom to support for president,” Ms. Collins said.