Despite the Congressional Budget Office’s estimate that nearly half of the legislation would not be paid for, senators were racing to move ahead with it. 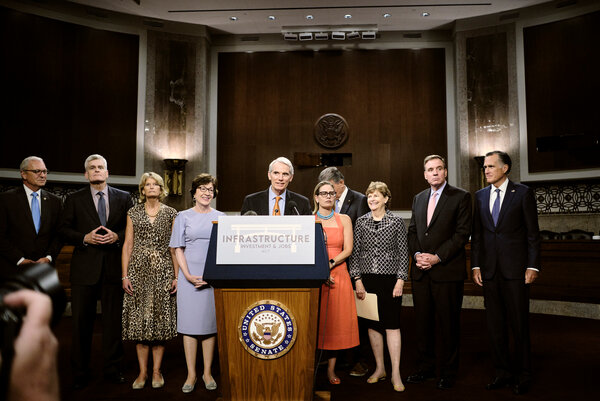 By Alan Rappeport and Emily Cochrane

WASHINGTON — Republicans and Democrats rushed on Thursday to line up a Senate vote to pass the $1 trillion bipartisan infrastructure bill, working to clear away the final obstacles despite a finding by Congress’s official scorekeeper that the bill would add more than $250 billion to the federal deficit over the next decade.

The flurry of activity came after three days of plodding work on the package, which would devote $550 billion in new money to rebuild the nation’s crumbling roads, bridges and rail systems and fund new climate resiliency and broadband access initiatives.

It followed an estimate from the nonpartisan Congressional Budget Office on the cost of the legislation, which was one of the last major hurdles to passing it. The office calculated that nearly half of the new spending — $256 billion — would be financed by adding to the nation’s debt from 2021 to 2031, contradicting the claims of Republican and Democratic proponents that the measure would fully pay for itself.

Fiscal watchdogs have warned that lawmakers have used budgetary gimmicks to obscure the true cost, and the findings could give pause to some Republicans who are loath to raise taxes or add to deficits but have agreed to support the legislation.

Still, after three days voting on changes to the 2,702-page bill and with their August vacations tantalizingly close, senators in both parties appeared ready to move forward with the bill, a key component of President Biden’s agenda.

Their eagerness to do so reflected how, even as Republicans have assailed Mr. Biden and congressional Democrats for pursuing a $4 trillion economic agenda that they say will cause inflation and dire consequences for the economy, many are willing to borrow additional money to pay for a long-awaited infrastructure package that will benefit their states.

Mr. Biden and Democratic congressional leaders regard passage of the bipartisan infrastructure legislation as a precursor to their far more ambitious, $3.5 trillion budget plan that is expected to be packed with policies to address climate change, health and education. It will also include tax increases, and is likely to generate unanimous Republican opposition.