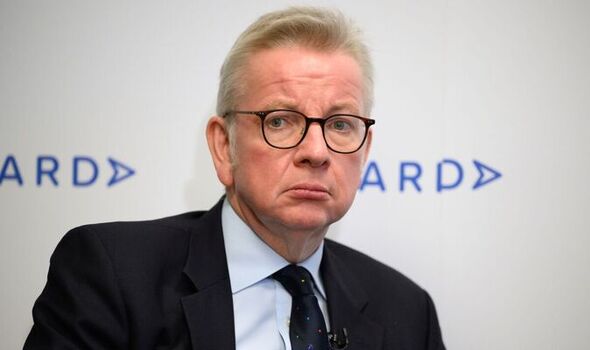 The Cabinet Secretary hit out as he warned of a campaign to “rewrite history” around the Trojan Horse scandal to introduce an “Islamist” ethos into Birmingham schools. He attacked activist groups for a “campaign of grievance” aimed at “undermining the truth” surrounding the plot.

Mr Gove, who was Education Secretary at the time of the 2014 scandal, also slammed some media reporting after the New York Times claimed it was an “Islamophobic hoax”.

The scandal centred on an agenda to introduce “an intolerant and aggressive Islamist ethos” into some Birmingham schools.

A probe was ordered by David Cameron’s then government following claims some Muslim groups were trying to take control in a number of schools.

Tahir Alam, former chairman of the Park View Educational Trust which ran three schools in Birmingham, was alleged to have written a 72-page document for the Muslim Council of Britain in 2007 detailing a blueprint for the “Islamisation” of secular state schools.

Mr Gove’s comments came in the foreword of a new report by Policy Exchange think tank into the Trojan Horse scandal published tomorrow.

The report is the first comprehensive documentation of the key events in Birmingham, including the forced removal of successful secular headteachers, the imposition of segregated classrooms, the reduction of “un-Islamic” subjects such as biology, and the promotion to children of extremist views.

It makes seven recommendations, including that the Government should consider an investigation into the impact that fears of being labelled “Islamophobic” or “racist” is having on the reporting by teachers of incidents of extremism or intolerance in schools.

It shows how the events unfolded, including concerns about schools in Birmingham prior to 2014 and the collapse of the teacher tribunals in 2017.

The clash between Islamist agendas and the need to prepare children for life and work in modern Britain is a recurring theme in the text.

Including Mr Gove the report is backed by central figures at the time Nick Timothy, then an advisor to the Home Secretary and Khalid Mahmood, then and now the MP for Birmingham Perry Barr.

The longest serving Muslim MP in the Commons, Mr Mahmood denounces what he sees as a “victimhood narrative” that has been created to muddy the waters about what really happened in Birmingham.

In a joint foreword, Michael Gove and Nick Timothy write: “The notion that the events in Birmingham had nothing to do with extremism is as dangerous as it is false, since it conceals an ugly truth that too many prefer not to acknowledge: we have a problem in Britain with Islamist ideology and its adherents, who seek to impose their intolerant values on Muslim communities, including children, through non-violent means including the capture of important institutions such as schools. The fear of being branded ‘Islamophobic’ has only made it more difficult to speak up about such extremism.”

They add: “There is a well-organised campaign that seeks to undermine our counter-extremism work and the Government’s counter-radicalisation strategy, Prevent.

“This is important to note in anticipation of the Independent Review of Prevent. Many of the key players in this campaign – who will no doubt repeat their demands for the scrapping of Prevent regardless of how it is fine-tuned – are also involved in undermining the truth about Trojan Horse. The common thread to their campaigning is the allegation of state-driven ‘Islamophobia’.”

“Their attempt to rewrite the history of Trojan Horse was given fresh wind earlier this year by a podcast series from Serial and The New York Times, which has taken a peculiar stance towards Britain in recent years, repeatedly portraying this country as an insular backwater whose inhabitants are drowning in a tide of nostalgia, racism and bad food. But the podcast was replete with errors and omissions … Little wonder that the podcast was such a travesty, when one of its reporters admitted he knew the conclusions of his investigation before it even began.”

Among a series of recommendations the Policy Exchange report calls for the government to conduct a full review of the progress made in implementing the recommendations made in the 2014 report by Peter Clarke, the former head of the Metropolitan police’s counterterrorism command.