WASHINGTON — Attorney General Merrick B. Garland announced on Monday a sweeping Justice Department investigation into the Louisville, Ky., police and the county government there, the second time in a week that the department has opened a civil investigation into a police force that prompted national furor over the killing of an unarmed Black person.

The Louisville police came under scrutiny after officers shot to death a Black medical worker named Breonna Taylor in March 2020 during a botched raid of her home. Her killing helped fuel nationwide racial justice protests, but an investigation elicited no charges in her death, only an indictment on a lesser count against one detective.

“Louisville has already taken some steps towards reform through its settlement with the family of Breonna Taylor, as well as through other measures,” Mr. Garland said in brief remarks at the Justice Department, where he was joined by the deputy attorney general, Lisa O. Monaco, and the associate attorney general, Vanita Gupta. “We commend those measures, and our investigation will take them into account.”

Last week, Mr. Garland announced a similar Justice Department investigation into the Minneapolis Police Department, a day after the former officer Derek Chauvin was convicted of murder in the death of George Floyd.

Together, the inquiries show that the Biden administration is seeking to apply stricter oversight of local departments amid a national outcry over allegations of police abuses.

Louisville police officers have also faced criticism for their sometimes forceful response to protests, including the use of chemical agents and sweeping arrests. Justice Department officials said that no single episode, not even a high-profile police killing, would lead to a broad inquiry into a police department’s conduct.

The Justice Department will investigate whether the police and the Jefferson County government engage in unconstitutional policing, including whether officers regularly use unreasonable force, conduct illegal searches, discriminate against minorities or flout legal protections for disabled people.

The investigation will also review whether failures stem from police policies, training and supervision, and whether officers are adequately held accountable when they break the rules. It is separate from the continuing criminal investigation into the death of Ms. Taylor that the F.B.I. announced last May.

Louisville has carried out some changes since Ms. Taylor’s death, including the ban of so-called no-knock warrants, as well as the creation of a civilian review board for police disciplinary matters. But the federal investigation is poised to be the broadest review yet, and officials in Louisville portrayed it as particularly credible coming from an independent federal agency.

“As someone who truly believes in police reform and doing things differently, which will only help us as a profession in the long run, I think it’s a good thing,” the Louisville police chief, Erika Shields, said during a news conference on Monday.

Mayor Greg Fischer called the review “an opportunity” for swifter and more substantial change that could put Louisville at the forefront of modern, equitable policing. “America is at a crossroads with policing,” Mr. Fischer said. “We just happen to be the city we’re talking about today.” 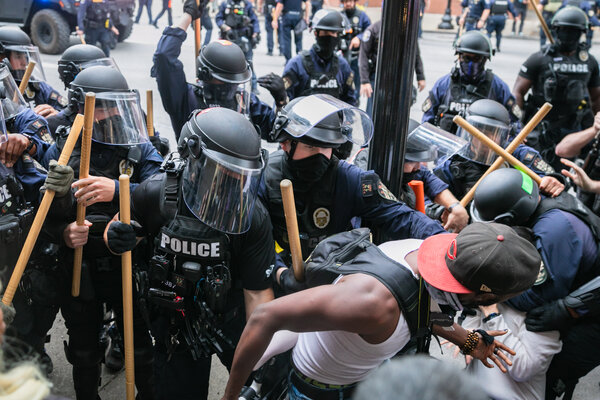 Senator Mitch McConnell, the minority leader and the most powerful Republican in Kentucky, signaled tacit support for the department’s action.

“Certainly there have been significant challenges there in my hometown since the Breonna Taylor incident,” he told reporters in the Capitol. “And it’s certainly not inappropriate for the Justice Department to take a look at it.”

The department opened the investigation after it conducted an “extensive overview” of public information and gathered findings from people who live in the Louisville community, Mr. Garland said. Officials would not say whether the process began under the Trump administration.

Public pressure for police accountability has continued to mount in recent weeks with more high-profile police killings of Black people, including a motorist named Daunte Wright in the suburbs of Minneapolis, a 13-year-old boy named Adam Toledo in Chicago and Andrew Brown Jr., a man in Elizabeth City, N.C., who was killed last week while apparently driving away from deputies who were trying to conduct a search.

While police officials say they welcome the type of broad investigations that the Justice Department has opened in Minneapolis and Louisville, many object to so-called consent decrees, the court-monitored agreements that are often imposed on police departments as a result of the inquiries.

Department officials say that consent decrees create and enforce a road map for operational changes at police departments and help restore trust in the police.

But Jim Pasco, the executive director of the National Fraternal Order of Police, said they can deepen rifts between the police and the communities they serve by giving the impression that rank-and-file officers, rather than systemic issues, are to blame for past abuses.

He said that police officers are less willing “to do appropriately aggressive things that keep crime rates low,” like investigate a scuffle on a street corner, when they believe their behavior is under a microscope, and that consent decrees do little to address problems like resource constraints and high crime rates.

The monitors who oversee consent decrees also have little incentive to end them, said Chuck Wexler, the executive director of the Police Executive Research Forum.

Mr. Garland said in a memo issued this month that Ms. Gupta was reviewing monitors’ roles in consent decrees and had until mid-August to make any recommendations.

Mr. Garland met on Friday with the heads of the nation’s major law enforcement groups to discuss federal policing oversight. Along with Ms. Monaco and Ms. Gupta, he emphasized that the Justice Department relies on the local police to help the government on myriad issues, according to Mr. Pasco and Mr. Wexler.

Both men called the meeting a positive start to a discussion with many areas of disagreement. “The team that is in place is one that will handle these things civilly and honestly, and speaking for the Fraternal Order of Police, we will do the same,” Mr. Pasco said.

Law enforcement officials told the Justice Department that they were concerned about consent decrees, particularly the role of monitors, and that they were having trouble recruiting and hiring.

“The attorney general recognizes how difficult the job of policing is,” Mr. Wexler said.

Mr. Garland acknowledged that on Monday. “We are uniquely aware of the challenges faced by those who serve as police officers,” he said. “We recognize the complex issues that make their already difficult jobs even harder.”

“Community trust is essential to making policing more effective and less dangerous for officers on the street,” Mr. Garland said.

Federal civil investigations into police abuses can take months. While federal officials notified Louisville officials on Monday that they would open an official investigation, Mr. Fischer said they did not give him an exact timeline.

Mr. Garland said the department would issue a public report when it had completed its work.

The NAACP Legal Defense Fund on Monday also asked Mr. Garland to suspend all grants to law enforcement agencies until the Justice Department confirms that all of the recipients are in compliance with the portion of the Civil Rights Act that prohibits recipients of federal funds from engaging in racial discrimination.

A Justice Department official acknowledged the letter and said it would respond according to what the law mandated, but that in the meantime it would continue to issue grants to police departments. The Justice Department said on Friday that it was allocating $58 million in grants to advance community policing, combat opioid and methamphetamine use, and support mental health services for law enforcement officers.

The department is also working to hire more lawyers for the division that oversees policing investigations, officials said on Monday.