Sir Keir Starmer faces the prospect of being forced into resignation should the Labour Party fail to win the Batley and Spen by-election on Thursday. A Sky News poll showed 41 percent of Labour members taking part in the survey would want Sir Keir to stand down if the key Labour constituency is lost. And an astonishing 69 percent backed Greater Manchester Mayor Andy Burnham to succeed him, suggesting he would make for a better leader.

Sky News’ deputy political editor Sam Coates said: “We teamed up with YouGov to ask Labour members what they think should happen.

“And these are voters, they are the bedrock of the party – who pay £50 a year, who go door-knocking, who vote in leadership elections. Their view is absolutely critical.

“In the event that Labour doesn’t win Batley and Spen, and it’s not looking good, you can see that 41 percent of the Labour membership should stand down, 48 percent say he should stay.

“But that’s still four out of 10 Labour members thinking that if tomorrow goes the wrong way for the Labour Party then Keir Starmer should go as Labour leader.” 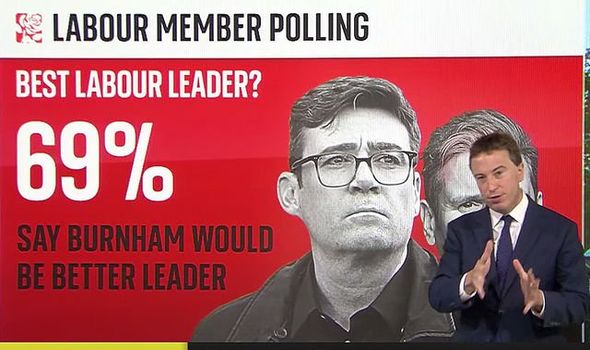 Mr Coates added: “What do they think might improve the situation for Labour? We asked people if they thought that Andy Burnham would make a better job and 69 percent, seven in 10 Labour members, say they do think it would be better.

“He would do a better job as a leader than Keir Starmer.”