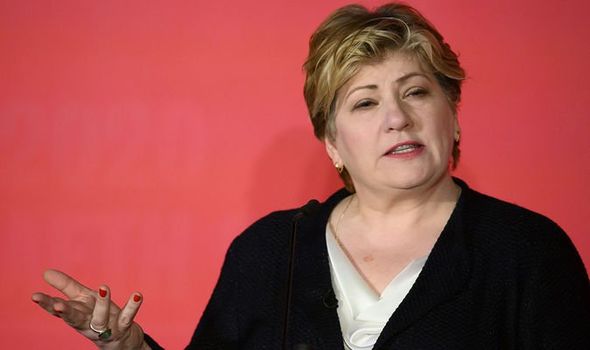 Mr Hands spoke out after Shadow International Trade Secretary Emily Thornberry questioned whether it made “sense” to put “all this energy” into securing international deals. Five years after the UK instructed the Government to quit the EU, Ms Thornberry said the bloc would still be Labour’s biggest trade priority.

Mr Hands argued that despite Sir Keir Starmer’s claim that Labour has accepted Brexit and moved on, its “top team continues to focus on old divides”.

He added: “It beggars belief that Labour’s trade chief says we shouldn’t waste energy on trade deals with the rest of the world and instead focus on the EU ‑ who we already have a trade deal with.

“It shows that even now, Starmer’s Labour refuses to believe in Britain’s potential to forge new trade and jobs with our allies across the world and instead continues to focus only on trade with the EU.”

The Government struck a trade deal with the EU last Christmas Eve.

But Ms Thornberry, one of Labour’s most ardent Remainers, said her priority was to “fix the big trade deal” with the EU.

She added: “I would begin with trying to repair the trade deal we already have with the European Union. Rather than spending time trying to score smaller trade deals that make very little difference.”

Speaking at an event at the Institute for Government think-tank, Ms Thornberry questioned entry to the £9trillion Pacific free trade bloc of 11 countries (CPTPP).

Ms Thornberry said: “Does it make any sense to put all this energy into UK membership of CPTPP and so little energy, by comparison, into fixing the holes in our deal with Europe?”

It comes as the UK agreed to become a “dialogue partner” of the Association of Southeast Asian Nations, which means it has high-level access to the bloc’s summits.

Foreign Secretary Dominic Raab said the closer relationship with the 10-member bloc was a “landmark moment” for the UK.

These include with our longstanding friends and allies in Australia ‑ meaning British cars, Scotch whisky and Stoke-on-Trent ceramics will be cheaper to sell into the country, boosting our industries here.

Joining would remove tariffs on 95 percent of goods traded between us and 11 member states, putting the UK at the centre of the fast-growing markets and major economies in the Asia-Pacific region.

And it would give UK businesses access to one of the world’s largest and most dynamic trade areas.

That’s why I was so astounded to hear Labour’s Shadow International Trade Secretary saying we shouldn’t bother with the rest of the world and focus on the EU ‑ who we have a free trade deal with worth £300billion.

This approach of turning our backs on the rest of the world not only makes no economic sense, it also shows Labour continue to have no faith in Britain’s strength and potential. They are stuck in the past.