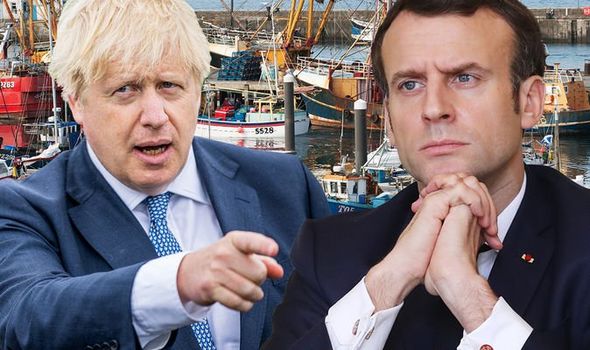 Annick Girardin, France’s maritime minister, gave Britain up until November 1 to approve more licences or risk retaliatory measures. Her comments came during a tense meeting with the European Commission and representatives from the French fishing industry.

French President Mr Macron told his government to draw up plans for reprisals against Britain in four areas.

These include cutting energy supplies to the UK and Jersey or severe the Anglo-French ties in defence and security, the Telegraph reported.

Ms Girardin reportedly told Maros Sefcovic, the EU Commission vice-president, the Paris could strike if Britain or Jersey did not grant more licences.

This comes after the UK approved just 12 permits out of 47 applications for small French fishing boats.

Despite relying on France for 95 percent of its electricity supply, Jersey has also taken a hard stance against EU trawlermen off its coast.

Now EU boats have until the end of October to provide the data needed to prove their post-Brexit right to fish in the Channel Island’s waters.

A source said Ms Girardin told the commissioners she is “preparing, with colleagues from other ministries, response measures that France can implement from Nov 1 if necessary”.

Ms Girardin told reporters after the meeting: “We are two weeks away from this [Jersey] decision.

“Nothing has been ruled out today, neither by France nor by the European Commission.”

Leading representatives from the French fishing industry demanded Brussels walks out of the talks and hit Britain with retaliatory measures.

Gerard Romiti, the president of France’s National Committee of Fisheries and Aquaculture, said: “We are tired of this bad faith shown by the United Kingdom in the implementation of the agreement, and more particularly in the issuance of access to the six to 12-mile fishing zones.”