For so long Margaret Thatcher’s loyal ally, the Deputy Prime Minister had become exasperated by her Eurosceptic policy and her increasingly imperious style, which often made him the target for withering public criticism. Now he turned on her with a subtle venom that sent a shockwave through the House. In one memorable passage he compared her to a cricket captain who sabotaged her own side by breaking their bats.

That night, Mrs Thatcher’s private secretary John Whittingdale confided in his diary: “We are now in for a real battle, and I am not sure we are going to win.”

His sense of foreboding was correct. Sir Geoffrey’s explosive speech triggered a chain of events that swiftly brought about a leadership challenge and the downfall of Mrs Thatcher. And exactly 30 years ago today, in tears, she left Downing Street for the last time after the longest premiership since the early 19th century.

The drama of that episode is beautifully chronicled by Charles Moore in his magnificent, award-winning authorised biography, whose third and final volume has just been published in paperback.

It shows why, three decades after her departure, Margaret Thatcher is a more potent icon than ever. In the authority of her leadership and strength of her determination, she dwarfs the vacillating incompetents who succeeded her.

“The point is that Mrs Thatcher was successful. That is the key to understanding her,” Charles Moore tells me. “The criteria of success if you are the Prime Minister are winning elections and getting things done. She did both. 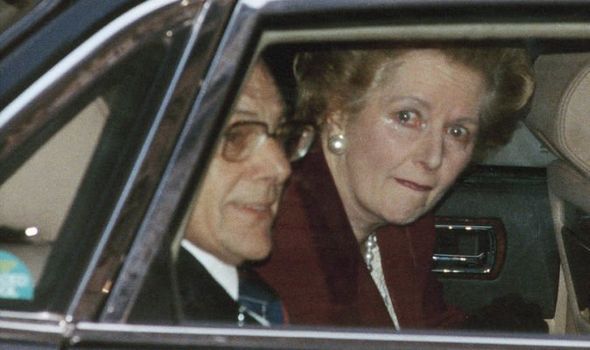 “The problem with leadership in Britain, and perhaps the democratic world, in the 21st century is that it is simply not successful. The capacity of a prime minister to get there, stay there and get things done seems to be greatly diminished.”

The secret of her success, he says, was her ferocious work ethic and her extraordinary command of detail, reflected in her boast that at Prime Minister’s Questions she never once had to pass a question to another Minister because she did not know the answer.

“One of her favourite phrases was, ‘Time spent in reconnaissance is never wasted’. She loved saying that,” Moore adds. “She did spend time in reconnaissance, preparing the ground. Although she was known as a conviction politician, she was very very careful before she did anything.”

“That approach helped her build, often in the face of ferocious opposition, a formidable record in office: revitalising enterprise, taming the unions, recapturing the Falklands, and rolling back the frontiers of the state.

But, in our age of heightened concern about equality, another crucial part of her legacy is her role as the first female leader of a major western country. That tends to be overlooked by feminists who do not like her, says Moore.

“Hillary Clinton left her out of a book about powerful women, which was ridiculous. Mrs Thatcher was the woman leader who could crack it. That is really important.”

Given the breadth of her success, it may seem remarkable now that Tory MPs voted to dump her in 1990. But her sheer longevity was beginning to prove counterproductive.

“If you have been in office for 11 years, that is basically too long for colleagues. The new generation wants their day in the sun,” argues Moore.

She was also becoming more domineering, more convinced of her own invincibility just at the moment when her powers were starting to wane.

When Richard Needham, one of her ministers, was caught on a bugged car phone saying “I wish that cow would resign,” Mrs Thatcher told her chief whip: “You mustn’t take it seriously. I have been called much worse things before. After all, it is only a three letter word.”

Humour, though, was not her strongest characteristic. When one of her aides put in a reference to the famous Monty Python “dead parrot sketch” in her 1990 conference speech, she anxiously asked Whittingdale, “This Monty Python, John, is he one of us?” Quick as a flash, Whittingdale replied: “Oh yes, he’s a great supporter.” 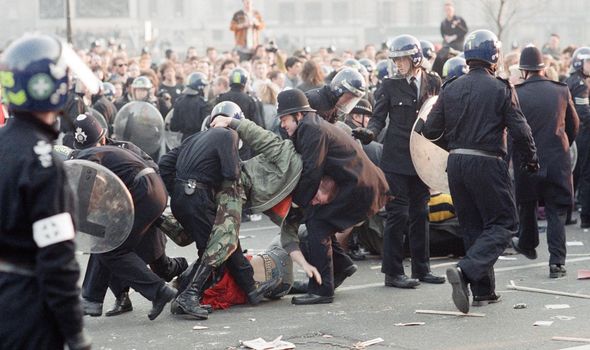 The twilight of her premiership was not devoid of achievements, such as the end of the Cold War. But she was also beset by a draining series of crises. The economy was in trouble, while the Tory Cabinet was badly split over entry into the European Exchange Rate mechanism, the precursor of the single currency.

Backbench MPs were also alarmed at the implementation of the Poll Tax, which, as Moore puts it, “was wreaking havoc in their constituencies”.

Their nerves, already frayed by public anger at the size of the new municipal tax bills, were further shaken by violent riots in the summer of 1990s.

The wounds in the Tory party burst open after Sir Geoffrey Howe’s speech, which prompted her arch rival Michael Heseltine to launch his leadership bid. Between the two big figures there was raw hostility, Mrs Thatcher referring to him after one of her last Cabinet meetings as “that b******”.

As Moore tells me, “She rarely used such language” but, within the Tory party, “the only one she hated was Heseltine. They did not agree on policy and she was anxious about his ambition. 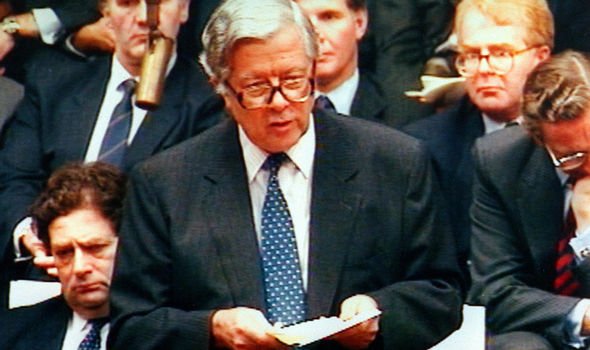 “She would say unkind things about him, like that he was very vain about his appearance or that he had a poor intellectual grasp. She was ungenerous about him when mostly she was more balanced about her colleagues.”

Mrs Thatcher had faced a challenge the year before from the eccentric backbencher Sir Anthony Meyer, but this was far more serious. Heseltine’s move created a febrile mood at Westminster, yet for someone so attentive to detail, she mounted a curiously disorganised defence, epitomised by two serious errors.

First, during the actual leadership vote, she was in Paris at an international conference to mark the end of the Cold War.

“It was very, very dangerous to be away at that time,” says Moore, who believes that the failure to move the ballot was a sign of how indifferent many senior Tories were to her survival.

The second was the appointment of the troubled MP Peter Morrison as her campaign manager. 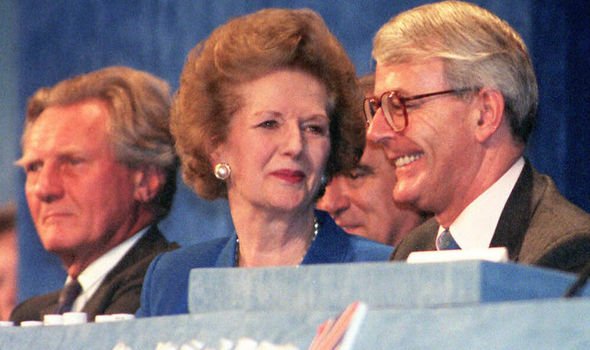 Although a loyalist, Morris “was a chronic alcoholic, a problem which was worsened by his terror of being outed as gay with a taste for youths at a time when the age of homosexual consent was 21.

“He was terribly drunk by then, poor man,” Moore tells me. “There were rumours of paedophile activity, though it seems to me there was no evidence for that. Possibly he was on the margins of the law.”

With the unsteady hand of Morrison at the helm, Mrs Thatcher did not gain sufficient votes to beat Heseltine outright on the first ballot.

The game was nearly up, and her end was confirmed on Wednesday November 21, when the majority of the Cabinet told her in a succession of individual interviews that she ought to go to avoid humiliation, though each professed his continuing personal support for her.

“In varying degrees, the ones who wanted her to go all took the line, ‘I’ll support you, but I think you’ll lose’,” says Moore. Mrs Thatcher saw through the coded language, complaining bitterly of “turncoats and being stabbed in the back”. 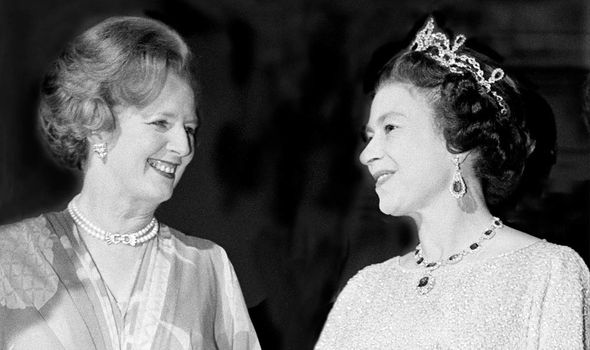 Without the united support of the Cabinet, she had no alternative but to withdraw from the second ballot. That paved the way for the victory of John Major, who had cleverly positioned himself as both the Stop Heseltine candidate and Mrs Thatcher’s chosen successor.

Before she left office on November 28, she had a final audience with the Queen, who made a point of immediately awarding her the Order of Merit.

“It was highly unusual for the honour to be given in this form, but there was great mutual respect between them,” says Moore.

That contradicts the narrative of the Netflix series The Crown, which has portrayed their relationship as antagonistic and argumentative.

“So many plays and films try to show Mrs Thatcher lecturing the Queen. That is the absolute opposite of the truth,” says Moore.

After her fall, Mrs Thatcher struggled for a sense of purpose. Used to a “stupefying” workload, she did not find it easy to fill her time.

When former Cabinet Secretary Richard Wilson suggested she take up golf like her husband Sir Denis, she used this as a cue to send up her image as a megalomaniac: “Oh Mr Wilson, I don’t like playing with little balls. I like playing with the whole globe.” 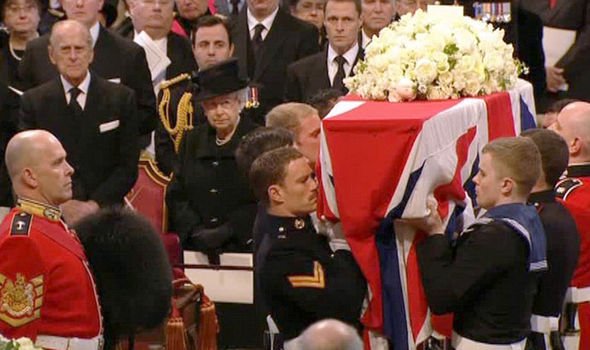 “Even so, she enjoyed the role of elder stateswoman, admired by other world leaders and adored by her large army of fans.

She was made Baroness Thatcher in 1992.

Yet in retirement she could still provoke visceral hatred. In 2002, an anti-capitalist protester decapitated a statue of her in the Guildhall, London. By then she had gone into severe mental and physical decline, fuelled by the years of remorseless pressure.

“It’s not how many miles there are on the clock. It’s how hard the car is driven,” said Sir Denis.

On her death in 2013, some ugly elements of the left celebrated, even holding street parties. But the wider mood was one of respect, epitomised by the attendance at her state funeral by the Queen who had never been to any other former PM’s funeral except that of Sir Winston Churchill.

Margaret Thatcher was fit to be bracketed with the great wartime leader. As Moore writes at the close of his magisterial book: “The woman so often criticised for being ‘uncaring’ cared more than any Prime Minister before or since about what she thought was her task. She gave everything she could.”

Margaret Thatcher: The Authorised Biography Volume Three: Herself Alone by Charles Moore (Penguin, £18.99) is out now.

For free UK delivery, call Express Bookshop on 01872 562310 or order via www.expressbookshop.co.uk