The Health Secretary’s update to the House was added to the schedule yesterday afternoon after concerning information about the mutant strain that emerged over the weekend. On Sunday it was revealed six cases of the variant, which was first detected in the Brazilian city of Manaus, had entered the UK.

Three cases were identified in England and three in Scotland.

However, 48 hours later and officials remain unable to track down one of the England cases after a test registration card was not properly filled out.

There are fears the coronavirus vaccines are not as effective against the Brazil strain.

If the variant, which is understood to be more transmissible, was to spread through the UK it could undermine the easing of lockdown. 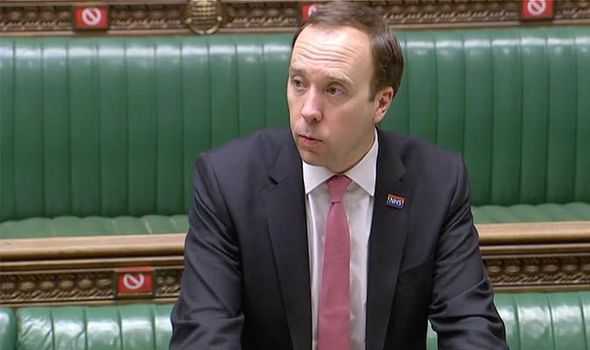 He told a televised Downing Street briefing: “All the evidence is that the five cases that we know about followed those quarantine rules and that, I hope, is very reassuring to people.

“There is no evidence that the sixth case did not follow those quarantine rules – we need to obviously get in contact with the person in question.”

He said the missing case had a coronavirus test on February 12 or 13 and “we haven’t seen any further knock-on transmissions in the data”, giving hope the case may have been contained.

The two cases in England which have been identified are both from the same household in South Gloucestershire after one person returned from Brazil on February 10.

In a frantic bid to ensure the virus has not spread through the community, extra testing is now taking place.

“We’re putting in place surge testing in South Gloucestershire as a precaution and I urge everyone to remain vigilant,” Mr Hancock said last night.

Extra measures are also being put in place to track down the passengers on a flight to Aberdeen which was taken by the three people in Scotland who have tested positive for the Brazil variant.

Dr Susan Hopkins from Public Health England (PHE) said further research was required to understand the full extent of the impact the mutant strain has on coronavirus vaccines.

She said PHE was tracking the strain “very closely”.