Commission President Ursula Von Der Leyen was slammed by Manon Aubry for her lack of clarity over the EU’s failure to secure vaccines. Ms Aubry pointed out that despite the three EU vaccine contracts being made public they were heavily redacted and so took it upon herself to bring a copy to show to the European Parliament. She accused Ms Von Der Leyen of “lying down” and letting “big pharma” take away her job as important aspects of the contract were noticeably missing like the costs and timetable for deliveries.

Speaking to the European Parliament, Ms Aubry said: “I’m not going to beat around the bush I have one crucial question for you, how could the European Commission accept and lie down when dealing with the big (pharmaceutical) companies?

“I got the impression, Ms Von Der Leyen, that the big (pharmaceutical) companies took your job over.

“I think there is a lack of clarity on every step along the way… and only three contracts have been made public brought to bare by the citizens.” 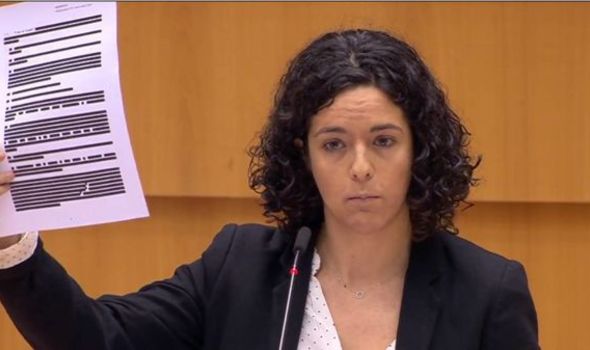