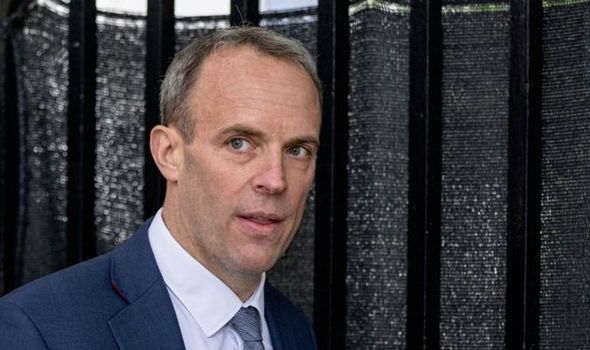 Dominic Raab said he would “much rather that we didn’t have to do it” but the 1.25 per cent increase would help tackle strains on social care.

Former housing secretary Robert Jenrick said the new levy should be postponed while the country is facing a cost of living crisis.

After being pressed four times on whether it was the “right thing to do” in April, Mr Raab said: “I think it is because there’s an absence of an alternative to deal with social care, which is a critical issue facing families up and down the country,” he said.

Mr Raab said: “I would much rather that we didn’t have to do it. But,given the pandemic and the walloping of the public finances, we do, and what I do not want to do is duck, as successive governments and prime ministers have, the issue of social care.

“And we’re making sure that we deal with the ageing population, the dementia challenges we face, and we’re the first government and this is the first prime minister that has grasped that nettle. I do not want us to go slow on that critically important social reform.”

Chancellor Rishi Sunak is facing intense pressure from backbenchers to delay the increase, which will come into force at the same time as the cap on energy bills rises.

Mr Jenrick, who approved the hike last year, said it should be delayed and the Government should “exploit Britain’s gas reserves”.

The ex-Cabinet minister said the Government was “turning its mind” to a cost of living crisis “lamentably slowly”.

“Alleviating the cost-of-living challenge requires us to confront hard realities,” he wrote in the Sunday Telegraph.

“First, it means recognising the need for the Government to intervene to help those facing brutal decisions as to what they must do without. But these should be targeted measures that are focused on low- and middle-income families. The size of the state is already the largest in my lifetime, and growing.”

“In the medium term we need to address our exposure to volatile energy markets by increasing domestic output, and this involves utilising the oil and gas that our islands have been blessed with. It is absurd that we have foregone cheap, reliable energy in the name of saving the planet, only to import it at higher prices from abroad – in the process, ceding jobs and creating vulnerabilities to unsavoury actors.”

He said the quickest way to “alleviate pressures on household budgets would be to postpone the hike” which would “also show the Government’s Conservative instincts remain”.

A government spokesman said: “The NHS and social care levy will be brought in to ensure the NHS gets the funding it needs this year to clear the waiting lists caused by the pandemic.”