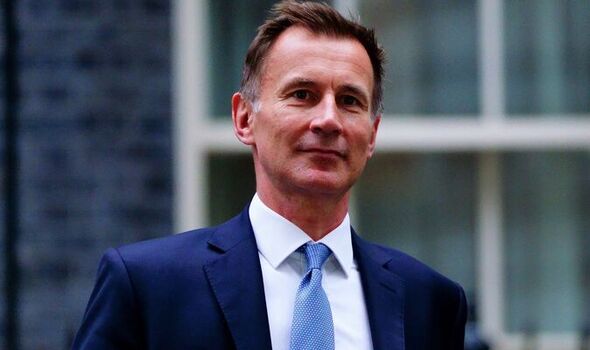 Professor Sir Charlie Bean, a former deputy governor of the Bank of England, gave his warning as figures revealed Government borrowing swelled to £20billion last month – even more than economists had predicted.

He said on BBC Radio 4’s The World at One: “Whoever comes in pretty much has to accept whatever Jeremy Hunt has planned for the fiscal statement. What you couldn’t really have is a comprehensive re-opening of the issues.

“It would be even worse if the new Prime Minister decided to replace Jeremy Hunt with another chancellor. That really would create a lot of volatility in the financial markets.

“There has really to be an acceptance on the part of whoever takes over that they will defer to Jeremy Hunt.” Yesterday the ‘Replacing Chancellor create

Chancellor vowed: “We will do whatever is necessary to drive down debt in the medium term and to ensure that taxpayers’ money is well spent.”

The shock £20billion Government borrowing figure – £3billion more than economists had expected – lays bare the challenge facing Mr Hunt and the new PM ahead of the mid-term fiscal event due in nine days’ time. The Office for National Statistics said a record debt interest payment for September accounted for £7.7billion of the increase, due to rising inflation.

Separately, the ONS said retail sales volumes fell by 1.4 percent on the previous month, meaning “consumers were now buying less than before the pandemic”.

That figure was far worse than the 0.5 percent decline predicted. It is likely to reflect, not only the cost of living crisis squeeze on household budgets, but also the impact of store closures for the Queen’s funeral.

The latest figures cover the start of Kwasi Kwarteng’s short and turbulent tenure as Chancellor.

His tax-giveaway mini- Budget on September 23 caused chaos in the financial markets.

But while the contentious measures have now been largely overturned by Mr Hunt, the backlash has raised Government borrowing interest rates – and that has fed into mortgage costs. It also led to the pound falling too t und a record low against the US dollar – and Sterling was still weak yesterday, trading at $1.11.

Shares and bond yields also reflected concerns about the UK’s political and economic crisis, which include doubts over whether Mr Hunt’s fiscal plan will take place on Halloween or be delayed by a new PM.

Even Downing Street could not guarantee the date was fixed yesterday.

Meanwhile, central government receipts – the money it receives from taxes and other payments – was £7billion higher for the month, at £71.2 billion.

Jake Finney, economist at PwC said: “The Government will need to announce around £30-40billion of spending cuts or tax rises.”

While Samuel Tombs, chief UK economist at Pantheon Macroeconomics, said Mr Hunt might announce up to £50billion of cuts. He added: “In short, austerity is about to make a comeback.”