BBC Scotland political editor Glen Campbell tweeted: “The @ScotTories are to call a vote of no confidence in first minister @NicolaSturgeon – accusing her of lying to parliament, which she denies. Scottish Conservative leader Douglas Ross has insisted Ms Sturgeon “must resign” He tweeted: “There is no longer any doubt that Nicola Sturgeon lied to the Scottish Parliament and broke the Ministerial Code. She must resign. No evidence she can provide will counter the claims of witnesses or refute that ignoring the legal advice cost £500,000 of taxpayers’ money.”

The Scottish Conservatives had earlier said they will press ahead with a vote of no confidence in Scotland’s Deputy First Minister John Swinney until all advice from the Mr Salmond legal action is released.

MSPs have twice voted against the release of the advice.

This was given months months before the SNP Government admitted a case brought by the former First Minister into the handling of complaints against him, but the Government has so far resisted.

But after a vote of no confidence was tabled against Mr Swinney, which the SNP’s rival political parties have indicated they would support, the deputy First Minister announced on Monday key legal advice” would be released. 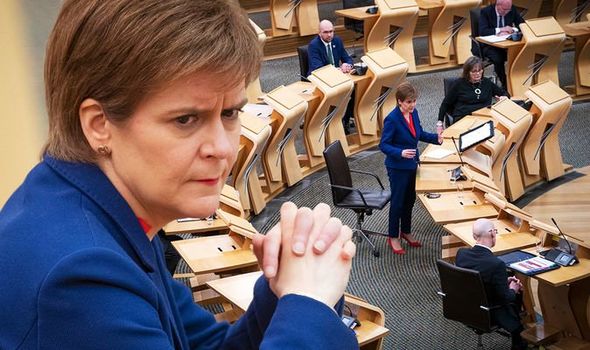 He confirmed in a letter to the inquiry set up to look into the affair it would be sent to them on Tuesday afternoon.

In his letter to the Committee on the Scottish Government Handling of Harassment Complaints, Mr Swinney conceded there were “reservations” expressed about the case after it emerged the investigating officer had prior contact with the complainers.

However, the Deputy First Minister added there were “good public policy arguments and reasonable grounds for the Government to continue to defend the judicial review”.

But Tory leader Mr Ross had said his party will press ahead with the vote until the advice is published in full.

“Recklessly continuing with the judicial review when it was doomed would clearly be a breach of the ministerial code,” Mr Ross said.

“The public deserve to know exactly what mistakes were made.

“John Swinney is not getting away with releasing only the evidence he wants us to see. We will press ahead with the vote of no confidence until all the legal advice is published.

“I’d like to thank other opposition parties for supporting Scottish Conservative moves to have the legal advice released for a third time.

“The government must be held to account and by uniting behind our motion, we will ensure the will of the Scottish Parliament is respected.”