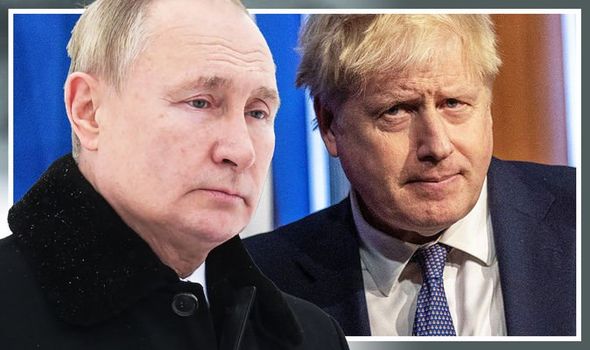 In a move designed “to send a clear message” to President Putin ahead of a ­meeting between the two leaders this week, the Prime Minister confirmed the significant deployment of troops, gunships, missile ­systems and ­vessels to Estonia and Poland. Britain already has a permanent military force in the region as part of Nato’s Enhanced Forward Presence. The new build-up will “send an important signal to Russia that the UK has real skin in the game”.

Russian battle groups – including 130,000 troops – are massed on Ukraine’s border and intelligence revealed Putin has a “puppet government” ready to install after an invasion. But Mr Johnson said: “This package will send a clear message to the Kremlin.

“We will not tolerate their destabilising activity and we will always stand with our Nato allies in the face of Russian hostility. If President Putin chooses a path of bloodshed and destruction, it will be a ­tragedy for Europe.

“Ukraine must be free to choose its own future. I have ordered our Armed Forces to ­prepare to deploy across Europe, ensuring we are able to support our Nato allies on land, at sea and in the air.”

The Prime Minister is expected to relay that message in person during a meeting with the Russian premier this week. The new deployment will include 1,200 Paras, Royal Marine mountain and arctic warfare specialists, Royal Artillery armed with deep fire rocket systems, and Apache gunships. Also poised are cyber units from the Royal Signals, drones, medics and six Chinook troop-carrying helicopters.

Elsewhere, an RAF Typhoon squadron will be sent to Cyprus, tasked with patrolling Romania and Bulgarian air space, while a Type-45 destroyer and a patrol vessel will be sent to the Black Sea. Special Forces have already deployed to Ukraine in a defensive capacity – half the SAS squadron has been tasked with monitoring Russian activities in eastern Ukraine, while the other half is on hand to assist in the evacuation of British citizens from the country, should this come to pass.

The aircraft carrier HMS Prince of Wales, command ship of Nato’s French-led high readiness maritime group, is currently in the North Atlantic and may be moved to the Mediterranean if tensions mount further, to relieve the US carrier Harry S Truman.

The proposed deployments follow a series of meetings between Nato and European allies last week, including an online summit with the leaders of the US, Italy, Poland, France, Germany, the European Council, the European Commission and Nato. These led to President Joe Biden putting 8,500 troops on alert to join a Nato force should hostilities break out, with the option of increasing that number to 50,000.

The PM has also spoken to President Recep Tayyip Erdogan of Turkey, Prime Minister Pedro Sanchez of Spain and President Volodymyr Zelenskyy of Ukraine. And he has directed Foreign Secretary Liz Truss and Defence Secretary Ben Wallace to prepare to go to Moscow for talks with counterparts in the coming days.

The Defence Secretary was in The Hague, Berlin and Brussels last week to discuss the situation in Ukraine. The PM has also asked the Chief of Defence Staff, Admiral Sir Tony Radakin, to attend Cabinet on Tuesday to brief ministers on the crisis.

Gen Sir Richard Barrons, who led Joint Forces Command until 2016, said: “These deployments ­represent quite a significant movement for the UK. They signal reassurance to those states that border Russia and send an important signal to Russia, that the UK has real skin in the game.

“The fact that the UK is prepared to take a hit – given the amount of Russian money circulating in the City – is something Putin doesn’t believe and must understand. But none of these measures alone will deter Russia. This will depend on what our allies do.”

While a host of Nato allies in Europe have followed Britain’s lead and contributed weapons to Ukraine, Germany last night continued to resist. It has opted instead to provide helmets and field hospitals and continued to ban Estonia from sending German-made weapons.

This is despite a new poll ­showing that 49 percent of Ger­­mans favour Nato allies making a commitment to defend Ukraine from aggression. In a strongly worded attack, Latvia’s defence minister Artis Pabriks yesterday accused Berlin of “driving a division line between west and east in Europe”, adding: “Germans forgot that Americans were granting their security in the Cold War. But they should remember. They’ve been living in peace for years.

“They think about gas, exports and co-operation. For us border countries, it’s different. For us it is existential. Our past doesn’t give much chance of just trusting Russia. It would be death for us.”

Former Tory leader Sir Iain Duncan Smith said: “If Russia invades Ukraine, it is a threat to the way we live our lives and to Nato. Ukraine is a democracy. “It has the right to free choice and there is no such thing as Russian spheres of influence. It always takes a crisis for the Democrats in the US to realise who their real ally is. Yet again they’ve seen that they cannot rely on the EU for this crisis, and have had to come to the UK.”

While applauding the UK’s deployments last night, defence committee chair Tobias Ellwood MP said they did not go far enough: “It’s time to take this threat seriously. Sanctions will not deter an invasion, and when it happens the impact on oil and gas prices will ripple right across Europe, as will food prices given Ukraine produces a third of the world’s grain. The way to deter an invasion is to move a Nato division into Ukraine and stand up to the Russian bully.”

The move may shift attention from Mr Johnson’s problems at home but Jonathan Eyal, international director of the Royal United Services Institute, said that Britain’s input is key. He said: “It’s simply wrong to suggest that because the PM has an interest in deflecting from his own domestic trouble, all that we’re doing in the case of Ukraine is a sham. That’s simply nonsense.

“Nobody is suggesting that Britain single-handedly is going to save Ukraine or defend Ukraine. But the British contribution has made a substantial difference to the way Europeans have approached the crisis and has stiffened the resolve of other countries to stand up to Russia.”

Pauline Latham, a Conservative MP and vice-chair of the all-party parliamentary group on Ukraine, said: “I think we have to wait and see what Ukraine wants and what they ask for because it’s not for us to go in and say we’re going to do this – it’s for them to request assistance. But I think all parties around the world need to stand up and be counted and assist Ukraine where they can and where it’s helpful for Ukraine.”