WASHINGTON — Secretary of State Mike Pompeo has threatened to close the American Embassy in Baghdad within weeks if Iraqi leaders fail to prevent Iranian-backed militias from firing rockets at the compound, three U.S. officials said.

The move would place U.S. diplomats out of harm’s way but could jeopardize years of efforts to both stabilize the Iraqi government and keep it from becoming too dependent on neighboring Iran.

It could also undercut international missions to train Iraqi security forces, and prompt diplomats from other nations to consider withdrawing from Baghdad as militias continue low-level but potentially deadly rocket and mortar attacks.

A shutdown of the U.S. embassy, one of the largest American diplomatic missions in the world, would also send a signal that Washington is abandoning the new Iraqi prime minister, Mustafa al-Kadhimi, a former intelligence chief whom U.S. diplomats had praised in the spring as a “patriot” capable of limiting Iranian influence and guiding a nation wracked by political turmoil, a coronavirus outbreak and violence.

Just last month, Mr. al-Kadhimi met with President Trump in Washington to press for keeping American troops in Iraq. Weeks later, the Trump administration announced it would nearly halve its forces there, to 3,000 by the end of October.

Nevertheless, the meeting in August signaled strong support from the White House for Mr. al-Kadhimi, which is why Mr. Pompeo’s threats have perplexed Iraqi officials.

On Tuesday, Mr. al-Kadhimi told officials in his cabinet that European diplomats were also now considering pulling back from Baghdad, given what he described as continuous rocket attacks.

However, Mr. al-Kadhimi expressed frustration with the international warnings, which he said were “not directed against the Iraqi government, but against the conditions of the country.”

“The closure of embassies means not cooperating with states in the economic, cultural and military aspects, in light of the great challenges facing Iraq,” Mr. al-Kadhimi said.

The foreign minister of Iraq, Fuad Hussein, traveled to Iran on Saturday to speak with Iranian leaders, including President Hassan Rouhani. He discussed Mr. Pompeo’s demands, one official said.

On Monday, two rockets killed two Iraqi women and three children at a home near the Baghdad airport, where some U.S. troops are stationed, Iraqi military officials said. Rocket attacks aimed at sites with Americans have occurred regularly since 2018.

Mr. Pompeo’s threat could be partly bluster aimed at galvanizing Iraqi political and military leaders and forcing the government to choose between the United States or Iran, with which Shiite officials in Iraq share a religious and cultural history.

But the State Department has begun a review process to close the embassy, U.S. officials said, with a decision expected before the Nov. 3 election.

Barbara A. Leaf, who was a senior diplomat in Iraq in 2010 and 2011 and later served as ambassador to the United Arab Emirates until 2018, said shutting down the embassy could hand Iran and Iraqi militias “a propaganda victory of epic proportions.” And issuing the threat in the first place was also “very risky and potentially counterproductive,” she said.

“This has stimulated an already raging appetite on the part of the Iranian-affiliated militias to push harder for what they and Iran want — the U.S. out altogether,” said Ms. Leaf, who is now at the Washington Institute for Near East Policy. “And that would significantly impair our own national security interests, as well as potentially destabilize Iraq further down the road.”

The plan would relocate the American ambassador to Iraq, Matthew H. Tueller, to either the U.S. Consulate in Erbil, a city in Iraq’s northern, semiautonomous Kurdish region, or to the sprawling Al Asad Air Base in western Anbar province, where American troops are stationed and which Mr. Trump visited in December 2018.

Embassy staff levels are already low: Mr. Pompeo ordered most employees to leave in May 2019, during a tense period with Iran. The fortified embassy is in the Green Zone, on a bank of the Tigris River.

American intelligence officials have determined that Iran does not want to take bold actions against the United States in the coming weeks, for fear of swaying the U.S. election toward Trump or prompting a military retaliation.

Officials said Mr. Pompeo discussed his plans in telephone calls with Mr. al-Kadhimi on Saturday and with Iraq’s president, Barham Salih, on Sept. 20. Mr. Tueller also spoke with Mr. Hussein. The State Department did not provide summaries of Mr. Pompeo’s calls with the Iraqi leaders, as it usually does with high-level diplomatic exchanges. A department spokesman would not confirm the conversations or the shutdown proposal.

“The Iran-backed groups launching rockets at our embassy are a danger not only to us but to the government of Iraq, neighboring diplomatic missions, and residents of the former International Zone and surrounding areas,” the State Department said in a statement. 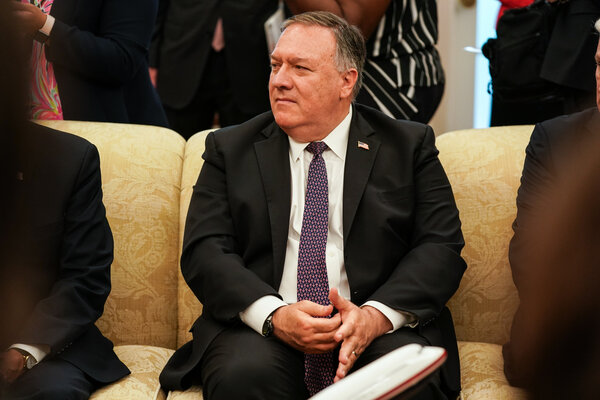 In one of the calls, Mr. Pompeo said American troops would “kill every Kata’ib Hezbollah” member as American diplomats depart Baghdad, according to one U.S. official. The Iranian-backed militia is one of several that have attacked U.S. forces and diplomatic posts in Iraq, going back to before the Obama administration declared an end to the Iraq war in 2011 and withdrew 50,000 troops. U.S. forces returned after the Islamic State seized parts of Iraq and Syria in 2014.

Mr. Pompeo appears unwilling to shoulder the risk of having any American diplomat killed or injured in Iraq in the next few weeks, as Mr. Trump enters the final stretch of a contest for the presidency against Joseph R. Biden Jr., the Democratic candidate and former vice president. American casualties would almost certainly become an issue in the election and could endanger Mr. Pompeo’s own ambitions to run for president later.

Mr. Trump has made hard-line actions against Iran one of his signature foreign policy issues, though that campaign has failed to achieve its main goals: getting Iran to end its nuclear activity and reduce its military presence and support of Arab militias in the Middle East.

In Iraq, American officials are most concerned over Kata’ib Hezbollah and Asa’ib Ahl al-Haq, which the State Department designated as a terrorist organization in January. The agency made the same designation of Kata’ib Hezbollah in 2009.

However, Iranian-backed militias are a powerful political force in Iraq: They were critical in supporting the Shiite-led government against the Islamic State, a Sunni group, and have been placed in the government’s security structure under an umbrella organization, the Popular Mobilization Forces. They also have seats in the parliament.

Some Pentagon officials and American commanders were taken aback by Mr. Pompeo’s warnings to Iraqi leaders. American officials said they had no immediate plans to make deeper U.S. troop reductions.

“This reduced footprint allows us to continue advising and assisting our Iraqi partners in rooting out the final remnants of ISIS in Iraq,” Gen. Kenneth F. McKenzie Jr., the commander of the military’s Central Command, said in Iraq in early September.

“Iran has an objective of ejecting the United States from the theater, from the region. And they see Iraq as a principal battleground for that,” General McKenzie said in an interview this month.

Other American officials voiced concerns that closing the Baghdad embassy could signal, wittingly or not, that American military action was imminent against Iranian-backed militias or even Iran itself, raising the specter of a larger clash in the Middle East just weeks before the U.S. presidential election.

Militias supported by Iran have fired rockets at the U.S. Embassy in Baghdad and other sites with Americans since Mr. Trump withdrew from a nuclear agreement with Iran in May 2018 that had been negotiated by President Barack Obama and other world leaders. During the negotiations, and after the agreement was reached in 2015, Iranian-backed militias refrained from attacking Americans.

In September 2018, a rocket attack that injured no one contributed to Mr. Pompeo’s decision to order a withdrawal from the U.S. Consulate in Basra, a southern city.

In December, a rocket attack on an Iraqi base near Kirkuk killed an American civilian interpreter. U.S. officials blamed Kata’ib Hezbollah and carried out airstrikes on five sites in Iraq and Syria, which Iraqi leaders criticized.

Members of the militia and other Iraqis then held protests at the U.S. Embassy in Baghdad. Days later, the U.S. military killed one of Iran’s top commanders, Maj. Gen. Qassim Suleimani, and the Iraqi leader of the Popular Mobilization Forces, Abu Mahdi al-Muhandis, with a drone strike as the two drove from the Baghdad airport.

Mr. Pompeo said the killings were to deter Iran and the Iraqi militias.

In March, rockets killed three service members, two of them American and one of them British, and wounded 12 others at Camp Taji. Militias had been firing rockets at various sites, sometimes up to 36 at once from launchers that Iraqi and American officials said represented an innovation. However, there have been fewer rocket barrages recently.

Mr. Pompeo has told U.S. officials he does not want any “Benghazis” — a reference to the deaths of four Americans, including the U.S. ambassador, at a diplomatic compound in Benghazi, Libya, in a 2012 attack. It was Mr. Pompeo, as a Republican congressman from Kansas, who led partisan criticism against Secretary of State Hillary Clinton during a House inquiry two years later.