Home » Politics » Prepare for no deal Brexit! Fishing stalemate as Frost has forced EU to their ‘red lines’

EU chiefs are worried their negotiator has little room to manoeuvre as the wrangling over future access to Britain’s coastal waters goes to the wire. Senior Brussels sources have warned they are unsure whether an acceptable solution for member states will emerge from the currency discussions. An EU diplomat said: “We are millimetres away from the bottom line of the mandate and we have to really look at the details of what is now being negotiated.

“Fish is a very important factor because of the way it plays into domestic politics in France and other member states.

“I don’t think there is a need or a desire by leaders to really change the mandate. It includes our bottom line and we are not prepared to cross it.”

The UK and EU teams were locked in late-night talks in London last night in a bid to get the Brexit trade deal over the line.

A mountain of takeaway pizzas were pictured being delivered to the Westminster conference centre being used to host the wrangling. 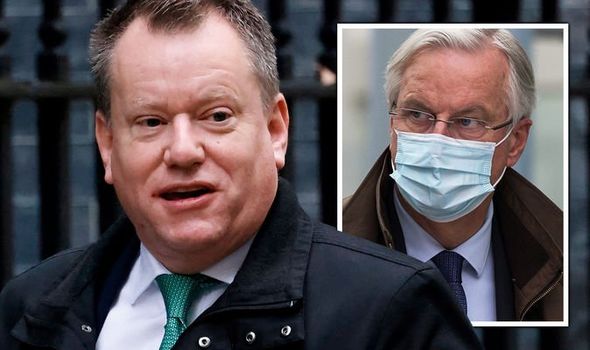 Chief negotiators Mr Barnier and Lord Frost are expected to meet later today to “take stock” after almost a week of intense negotiations.

If there is “positive noise”, the pair could decide to draft in Boris Johnson and Ursula von der Leyen to decide on a final compromise.

But the diplomat played down chances of a deal being finalised within “hours”.

The insider said: “I do not have the impression that we are hours away from a deal. The gaps to be bridged are still quite substantial.”

Mr Barnier is under pressure by EU capitals, led by France, to walk away from the talks unless Boris Johnson makes significant concessions in disputes over post-Brexit fishing rights and common standards.

At a briefing of EU27 envoys yesterday, the Frenchman was told he has until the end of the week to decide whether Britain had offered enough concessions, according to a diplomatic note seen by Express.co.uk.

Emmanuel Macron is trying to collapse negotiations to force the UK into giving the EU widespread access to British fishing waters.

The French President wants the EU to haul Britain back to the negotiating table in the new year without the “time pressure” of having a deal in place ready for the end of transition arrangements on December 31.

An EU source said: “We are quickly approaching a make or break moment in the Brexit talks.

“It is still unclear whether negotiators can bridge the gaps on issues like level playing field, governance and fisheries.”

Hardline states, led by Mr Macron, are concerned Mr Barnier could compromise in order to clinch a last minute agreement and protect his legacy.

EU fishing states, such as France, Belgium and Denmark, fear they face being largely shut out of the UK’s coastal waters.

British officials rubbished claims by Mr Barnier in a separate briefing to MEPs that Downing Street had watered down its fishing demands.

The Brussels diplomat said No10 was now ready to accept 60 percent of the value of the stocks in UK fishing grounds.