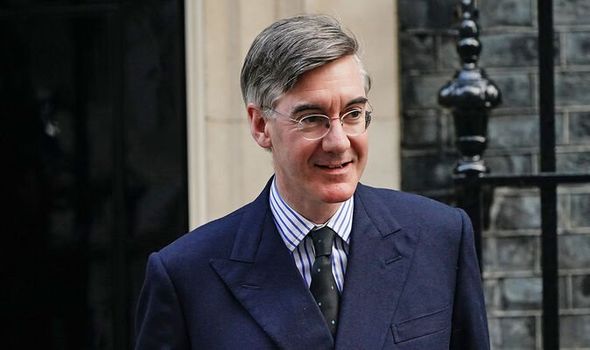 The Prime Minister handed the leading Eurosceptic the newly created post as part of a Cabinet mini-reshuffle yesterday.

Mr Rees-Mogg will lead efforts across the Government to accelerate the sweeping away of Brussels regulations and shape the UK’s future as an independent sovereign nation.

A source close to him said the role will focus on “using the benefits of Brexit to improve our constituents’ standard of living and to make their lives easier every day”.

They added: “The PM put him there as he knows he needs the right man to get the job done.”

Mr Rees-Mogg switched from his previous post as Commons Leader to take on the role.

Unlike his last job, this will have full Cabinet minister status, with a Whitehall base in the Cabinet Office.

The Prime Minister’s spokesman said: “He’s attending Cabinet in full in light of the emphasis the PM places on further seeking out ways to make the most of having left the EU.”

Chris Pincher has been handed the role of Deputy Chief Whip, moving from his previous position as a minister in the Department for Levelling Up, Housing and Communities.

His appointment marks a return to the position he held during Theresa May’s tenure in No 10.

Paymaster General Michael Ellis has been given an additional role as Cabinet Office Minister.

Assistant whip Heather Wheeler will take on extra responsibilities as parliamentary secretary in the Cabinet Office on top of her current post.

Foreign Office minister James Cleverly will take over Mr Heaton-Harris’s responsibilities for European diplomacy, with his previous portfolio covering North Africa and the Middle East going to other members of the Foreign Office team.

Wendy Morton, a Foreign Office minister, has been promoted to become a minister of state in the Department for Transport.

An extra seat will now be needed around the Cabinet table, with 31 ministers either full members or attending weekly meetings.

Some MPs were irritated that the most high-profile roles all went to men, with Westminster insiders branding the rejig a “he-shuffle”.

The Prime Minister’s spokesman confirmed it was designed to bolster the wider No 10 overhaul carried out in recent days, with a string of appointments to replace aides quitting in the wake of “Partygate”.

He added: “As the PM said last week, it’s important we make immediate changes to improve and strengthen Cabinet government and improve that vital connection between No 10 and Parliament.

“We have changes to the Whips’ Office, improving engagement with MPs and continuing to drive the Government’s ambitious agenda.

“We have a Brexit Opportunities Minister, a role that has been created to drive forward the changes we are able to make now we have left the EU, delivering on our post-Brexit agenda across Whitehall. This was about strengthening that relationship between Cabinet, Parliament and Number 10.” The shake-up follows criticism from some MPs that Downing Street has become too detached from backbenchers.

Senior Tory MP Sir Bernard Jenkin warned: “We’re interested not in the optics, in some impression of a reset. We’re looking for a change in the capability and the character of the Government so that we can have confidence that nothing as clumsy and mortifying as this Partygate episode can ever happen again.”

Downing Street officials dismissed criticism from some MPs that Mr Spencer was handed the prestigious Commons Leader office despite a complaint from fellow Tory Nusrat Ghani.

She claimed he raised her “Muslimness” during a meeting about her career. He denies this.

The Prime Minister’s spokesman said: “There is an investigation ongoing to establish the facts of what happened.”

Opposition critics claimed the reshuffle was an attempt to divert attention from the recent turmoil at No 10. Labour Deputy Leader Angela Rayner said: “Today, the Labour Party frontbench was in Parliament proposing measures to tackle food poverty caused by an inflation crisis created in Downing Street and supporting the mental health of our children and young people – vital topics affecting families across the country.

What was Boris Johnson doing? Reshuffling the deckchairs when he’s already hit an iceberg.”

Lib Dem Layla Moran said: “This reshuffle is a pathetic attempt to distract from the Downing Street Partygate scandal, putting Boris Johnson’s political survival ahead of the national interest.

“The only real Brexit opportunity so far seems to be for Jacob Rees-Mogg, who will pocket a whopping pay rise after trying to get Owen Paterson off the hook.

“The Conservatives need to focus on tackling the big issues facing the country instead of doling out top jobs to Boris Johnson’s few remaining allies.”