WASHINGTON — The certificate of appreciation that Hanadi Al Haidari’s family received for providing shelter, food and translation services for the United States military still looks brand-new, without even a crease. She keeps it next to her Iraqi passport in her new home in Denver.

The document is both proof of the risk the family took to assist American soldiers and a reminder of a promise unkept. Ms. Al Haidari’s brother, Ahmed, whose work as a translator for the troops allowed his family to apply for a priority refugee visa to the United States, remains in limbo in the Middle East, struggling to support his 9-year-old son.

“He just wants the basic rights of a normal person,” Ms. Al Haidari said, adding that she did not blame any specific official or government for the delay in approval for her brother’s resettlement. But she was also quick to note that her family’s displacement was rooted in the U.S. invasion of Iraq and the ensuing upheaval. “We wanted to come here because we don’t have a home,” she said. “We don’t have a country anymore.”

The Trump administration had reserved 4,000 slots for Iraqi refugees who had helped American troops, contractors or news media or who are members of a persecuted minority group in the fiscal year that ended Sept. 30. It ultimately admitted only 161 Iraqis — or 4 percent — to the United States, the lowest percentage of the four categories of refugees the administration authorized for resettlement last year. While the coronavirus pandemic caused refugee flights to be canceled for months, immigration lawyers also cited the lasting effects of President Trump’s initial refugee bans and expanded vetting of those fleeing persecution. Of the 5,000 slots reserved for victims of religious persecution, 4,859 were filled — a reflection, perhaps, of the administration’s political priorities.

Ms. Al Haidari’s hopes for her family’s reunion dimmed further last month when Mr. Trump told Congress he planned to cut the cap on refugees for a fourth straight year. The number of refugees admitted depends on the administration and world events, but the ceiling for the current fiscal year, 15,000, is the lowest in the program’s four decade-long history. During the Obama administration, the cap was at least 70,000 a year. The announcement came as Mr. Trump fell back on the kind of anti-immigration messaging that has been a staple of his campaigns, tarring refugees as threats to public safety and the economy, despite multiple studies debunking such generalizations. He also used the issue to attack his Democratic opponent, former Vice President Joseph R. Biden Jr., who has proposed raising refugee admissions to 125,000.

But families like the Al Haidaris make for unlikely political targets. Veterans and active-duty service members fear that the exclusion of those who assisted the military from resettlement is the real threat to national security because such cooperation will be harder to come by in future conflicts. More than 9,800 Iraqis were welcomed to the United States in 2016, according to State Department data. By the 2019 fiscal year, that was down to 465.

“If the message is sent that those who stepped up to help American service members were left behind, forgotten, and to die, then it’s going to significantly reduce the likelihood of people stepping forward in the future in other countries to help U.S. service members with their missions,” said Allen Vaught, a former captain in the Army who served in Iraq from 2003 to 2004.

Mr. Vaught has helped two Iraqis and their families resettle in Texas, his home state, where he served in the Legislature from 2007 to 2011. Two other translators who helped his squad were executed, Mr. Vaught said. He has spent years lobbying for the approval of a fifth who fled to Egypt in 2014 to escape retaliation from Iraqi militia groups. At least 110,000 Iraqis are waiting to be approved as refugees based on their assistance to the American authorities, according to resettlement organizations.

“Anyone who worked with U.S. forces had a scarlet letter,” Mr. Vaught said. “They had a mark on their head. And the way they killed them was gruesome. One of my translators was burned alive.”

“We’ve got a lot of things to make right,” he added.

The administration tried to revamp the refugee program last year not only by reducing the overall cap on admissions but also by empowering local governments to block resettlement in their communities, a move that has been halted while opponents litigate it in the courts. Last year was also the first time that the United States set admission categories based on the threats that refugees face in their home countries rather than on what part of the world they are from.

The lower numbers are partly because of the pandemic, which prompted the suspension of refugee flights from March through July and prevented officers from traveling overseas to conduct interviews. But immigration lawyers also pointed to the lasting effects of earlier, more sweeping bans of refugees from Muslim-majority countries that Mr. Trump tried to put in place, and the toughening of vetting processes, even for those who have already passed a security screening.

Those seeking refuge in the United States have long had to undergo multiple interviews with immigration officers and organizations contracted by the State Department to obtain approval to travel to the United States. In Iraq, those interviews were slowed last year by the withdrawal of nonessential employees from the American Embassy in Baghdad.

The administration now requires additional information from many refugees and their families. Applicants from 11 countries — most of them with Muslim majorities — have to wait for their social media accounts to be vetted, exacerbating delays. Their relatives, including children, have been subjected to additional security screenings. 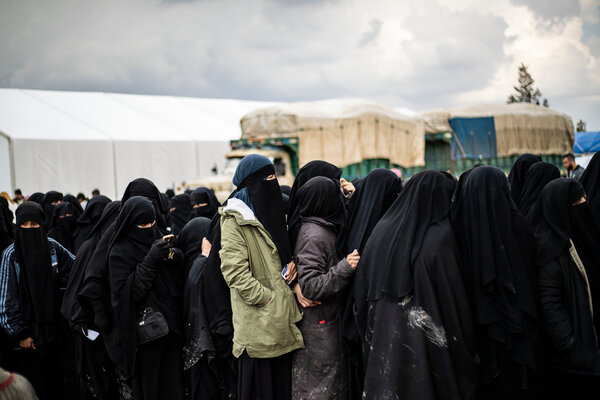 And refugees have been asked to provide phone numbers and addresses dating back 10 years instead of five — no easy task for a family that may have been searching for a permanent residence for years, according to a report published this month by the International Refugee Assistance Project, or IRAP.

The State Department’s press office said in a statement that the agency needed to conduct the additional security screenings to ensure that those being allowed to resettled in the country had been properly vetted.

Mr. Vaught’s former translator, now in Egypt, is caught in that loop, waiting to clear security checks even after he was told to prepare to travel to the United States in 2017.

The translator earned the support of the troops he helped. In an interview, he asked to be identified as Sam, the nickname Mr. Vaught’s team gave him.

“I believe it is too dangerous for him to work in Falluja any longer,” an Army officer wrote in a 2004 memo requesting that the Army relocate Sam. “He has been loyal and trustworthy and deserves our appreciation.”

That same year, a militia group fired more than a dozen shots at Sam and lobbed a bomb at his home, according to written testimony he provided in a lawsuit against the administration’s expanded vetting. He decided he needed to get away from his wife and two daughters for their safety. After bouncing from home to home in Iraq, he escaped in 2014 to Egypt, where he hoped to complete the refugee process.

Sam said he still feared for his family’s safety.

“Even death is better than the situation I’m in,” he said in a phone interview. “They took my integrity with all of this.”

Another path to the United States for Iraqis and Afghans who assisted the military is to apply for a special immigration visa, but that program has also faced extensive delays. Despite a congressional mandate that the State and Homeland Security Departments process the visas within nine months, more than 8,000 applicants have been stalled longer than that, according to IRAP, which is fighting the delays in court.

Sibghatullah Nooristani, an Afghan translator for the U.S. military, requested a special visa for him and his family to leave Afghanistan in 2013. As the delays mounted, he eventually reached out on Facebook to someone he had worked with in the military, Marc Silvestri.

Mr. Silvestri, 42, had served in Afghanistan from 2008 to 2009 and promised to help. He could not believe the process was taking so long, as Mr. Nooristani’s family faced death threats for helping the American troops.

Mr. Silvestri contacted members of Congress and community members in Revere, Mass., to build support for Mr. Nooristani’s case. When Mr. Nooristani finally arrived at Boston Logan International Airport this June, a group of police officers, members of the Revere City Council and Mr. Silvestri’s family were there to greet him.

For Mr. Silvestri, the president’s exclusion of refugees has also prompted a political shift. He said he voted for Mr. Trump in 2016 but would not do so this year.

“Our government has left so many of them behind,” said Mr. Silvestri, the director of veteran services for Revere. “These people have actually served your country already. Let’s give these guys a shot.”

Mr. Nooristani is still fearful for his brother-in-law, who remains overseas. It is the same concern that has made Ms. Al Haidari’s parents so depressed in Denver.After passing each security screening, Ms. Al Haidari, her parents and her brother were separately approved to travel to the United States. Ms. Al Haidari arrived first in 2016, and her parents two weeks later. She said immigration officials told the family Ahmed would be cleared to travel in the coming weeks.

Then Mr. Trump signed his initial ban on refugees, and Ahmed has been caught in the bureaucracy of expanded vetting.

Ms. Al Haidari said her mother remained glued to television news, listening for new policies that would make it even harder for her son to come to the United States.

Ms. Al Haidari has taken on multiple jobs to care for her ailing parents in her four years in the United States. She has balanced 10-hour triage shifts at a nearby emergency room and methadone clinic while studying for a pharmacist exam, sending extra money to her brother overseas when she can.

“The only thing I want from life now is to see my brother here,” Ms. Al Haidari said.

She often spends her free time volunteering at the local resettlement offices, helping translate for newly arrived refugees. Her language skills initially made her a constant presence there.

But as Mr. Trump has shriveled the refugee program, there is hardly anyone left to help.