WASHINGTON — Top Republicans moved swiftly on Wednesday to purge Representative Liz Cheney of Wyoming from their leadership ranks for vocally rejecting Donald J. Trump’s election lies, laying the groundwork to install a replacement who has embraced his false claims of voting fraud.

The move to push out Ms. Cheney as the No. 3 House Republican in favor of Representative Elise Stefanik of New York, a Trump loyalist who voted to overturn President Biden’s victory in key states, reflected how thoroughly the party’s orthodoxy has come to be defined by fealty to the former president and a tolerance for misinformation, rather than policy principles.

“The Republican Party is at a turning point, and Republicans must decide whether we are going to choose truth and fidelity to the Constitution,” Ms. Cheney wrote in a searing opinion piece published in the Washington Post on Wednesday evening. She framed her fate as a referendum on the party’s future and warned that Republicans must “steer away from the dangerous and anti-democratic Trump cult of personality.”

Ms. Cheney, 54, is a conservative who rarely defected from Mr. Trump’s policy positions in Congress, but she has refused to absolve him or the party of their roles in fomenting the Jan. 6 assault on the Capitol with groundless claims of fraud in the 2020 election. Ms. Stefanik, 36, is more moderate and has more often parted ways with Republicans over her years in Congress, but she has emerged recently as one of Mr. Trump’s most vociferous defenders, willing to indulge and even amplify those claims.

After days of quiet discussions about ousting Ms. Cheney, the effort erupted into open Republican warfare on Wednesday morning. Party leaders and Mr. Trump himself publicly boosted Ms. Stefanik, both women issued defiant statements about their intentions and dueling factions in the party competed to frame an episode with broad implications for the 2022 midterm elections and beyond.

By day’s end, even President Biden had weighed in on what he called a “mini-rebellion” in the Republican ranks, arguing that the party was plagued by an inability to define itself.

The turmoil illustrated how heavily Mr. Trump still looms over the Republican Party, where a pilgrimage to pay homage to the former president at his Mar-a-Lago club in Palm Beach, Fla., has become a required stop for elected leaders and efforts to restrict voting — in the name of his claims of a stolen election — are proliferating around the country.

What was clear on Wednesday was that House Republicans were headed for a confrontation, as soon as next week, that now appears likely to result in Ms. Cheney’s firing from her leadership post. Representative Steve Scalise of Louisiana, the No. 2 Republican, became the highest-ranking figure to call for her removal, endorsing Ms. Stefanik as Representative Kevin McCarthy of California, the minority leader, lobbied behind the scenes on the New Yorker’s behalf.

“House Republicans need to be solely focused on taking back the House in 2022 and fighting against Speaker Pelosi and President Biden’s radical socialist agenda,” said Lauren Fine, a spokeswoman for Mr. Scalise. “Elise Stefanik is strongly committed to doing that, which is why Whip Scalise has pledged to support her for conference chair.”

Support from Mr. McCarthy, in particular, had helped save Ms. Cheney from a similar challenge in February after her vote to impeach Mr. Trump. But the top leader, like rank-and-file Republicans, had grown increasingly frustrated in recent weeks as Ms. Cheney continued to call out Mr. Trump in media interviews and took shots at her own party for tolerating his falsehoods, including during a party retreat in Orlando last week.

By Wednesday, as it became clear that Mr. McCarthy had turned on her, Ms. Cheney was hitting back at him personally, noting that while the leader had initially condemned Mr. Trump for failing to call off his supporters during the Jan. 6 riot, “he has since changed his story.”

Mr. Trump, who had been furious at Mr. McCarthy and others for backing Ms. Cheney earlier this year, sought to drive a nail in her political coffin on Wednesday. In a statement, he derided her as a “warmongering fool” and endorsed Ms. Stefanik, whom he called “a far superior choice.”

“We want leaders who believe in the Make America Great Again movement, and prioritize the values of America First,” he wrote. “Elise is a tough and smart communicator!”

Ms. Stefanik, a fourth-term congresswoman representing New York’s Adirondack region, had initially been wary of appearing as if she was pushing Ms. Cheney out for personal gain. But mere minutes after receiving Mr. Trump’s support, she abandoned any hint of reticence and took her campaign to replace Ms. Cheney public. “We are unified and focused on FIRING PELOSI & WINNING in 2022!” she wrote on Twitter.

Seeing votes stacking up against Ms. Cheney, her supporters said she would not fight the drive to dethrone her; unlike in February, she has not tried to rally her allies on or off Capitol Hill. But they said she also did not intend to go quietly.

Representative Adam Kinzinger of Illinois, perhaps Ms. Cheney’s most outspoken supporter, demanded on Twitter that every lawmaker “go on the record as to how they will vote on @RepLizCheney in operation #coverupJan6 and concerned donors should take notes.”

Ms. Cheney herself sought to appeal to like-minded Republicans in her opinion piece, warning that they risked driving the party toward irrelevance for short-term gain.

“While embracing or ignoring Trump’s statements might seem attractive to some for fund-raising and political purposes, that approach will do profound long-term damage to our party and our country,” Ms. Cheney wrote. “Trump has never expressed remorse or regret for the attack of Jan. 6 and now suggests that our elections, and our legal and constitutional system, cannot be trusted to do the will of the people. This is immensely harmful.”

Yet she found few other Republicans willing to defend her publicly, even among those who forcefully condemned Mr. Trump after Jan. 6 and sought to wrestle control of the party away from him.

Senator Mitch McConnell of Kentucky, the minority leader who vocally stood behind Ms. Cheney in the past and had previously made clear he wanted to purge Mr. Trump from the party, declined to address her predicament on Wednesday.

“One hundred percent of my focus is on stopping this administration,” he said, repeating the sentence almost word for word in response to follow-up questions about the move to oust Ms. Cheney.

Weighing in on Wednesday from the White House, Mr. Biden, who has sought out Republican support to pass a series of sprawling infrastructure plans, expressed regret about what he characterized as a party at risk of imploding.

“We badly need a Republican Party,” Mr. Biden said. “We need a two-party system. It’s not healthy to have a one-party system.”

In rallying around Ms. Stefanik, Republicans were turning to a figure who has embodied elements of the party’s transformation since she arrived in the House in 2015, as the youngest woman ever elected to Congress at the time. A Harvard graduate and former aide to President George W. Bush and Speaker Paul D. Ryan, the 2012 vice-presidential nominee, Ms. Stefanik has shifted easily from the old Republican establishment to a new one forming around Mr. Trump. 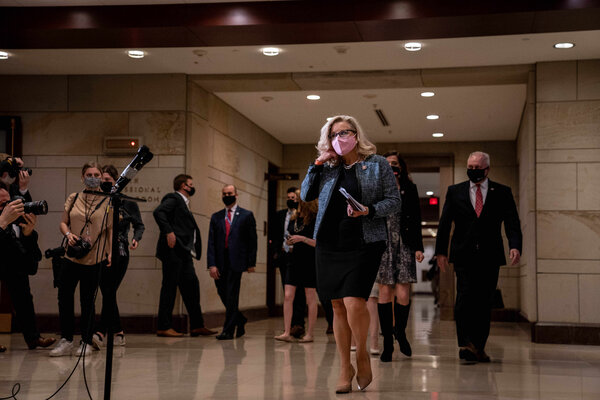 While she began as one of the more moderate members of the Republican Conference — her voting record is far less conservative than Ms. Cheney’s, according to the conservative Heritage Foundation — Ms. Stefanik became one of Mr. Trump’s most strident loyalists. That role has buoyed her rapid ascension and brought in millions of dollars in campaign donations.

In a lengthy, error-riddled statement published on Jan. 6 explaining why she would vote to invalidate the election, Ms. Stefanik repeated a number of Mr. Trump’s baseless claims of widespread improprieties, including incorrectly claiming that “more than 140,000 votes came from underage, deceased and otherwise unauthorized voters” in one county in Georgia alone.

Her metamorphosis mirrored that of her upstate New York district, where voters had supported a string of Democratic presidential candidates — including Barack Obama twice — before throwing their backing to Mr. Trump in 2016.

Yet Ms. Stefanik has also been at the forefront of her party’s efforts to improve its standing and representation among women at a time when Mr. Trump’s caustic style threatened to alienate them and further narrow Republicans’ appeal. Her political action committee supported several of the current freshman class’s rising stars, all of them women who almost single-handedly secured the party’s impressive gains against Democrats in last year’s elections.

“I know I am here in Congress because Republican women like Elise Stefanik paved the way,” said Representative Young Kim, Republican of California. “She saw the importance of helping women candidates to make it out of the primary if Republicans were serious about electing more women and growing the G.O.P. base.”

Her allies argue that Ms. Stefanik’s ascendancy will bolster the party as Republicans seek to win back the House and the Senate in the midterm elections, describing her as a disciplined messenger with easy mastery over policy.

“They are going to find a very smart, charming and confident younger member of Congress,” said Michael Steel, a Republican strategist who worked with Ms. Stefanik as an aide to Mr. Ryan in 2012. “And I think that is a good thing for the Republican Party right now.”

In a glowing blurb for Time magazine’s “100 Next” list in 2019, Mr. Ryan, who has also backed Ms. Cheney, hailed Ms. Stefanik as the future of the Republican Party.

“Like any good architect, Elise sees around the corner,” Mr. Ryan wrote. “She is thinking about the big picture when the crowd is scrambling to capitalize on the controversy of the day.”