In the turbulent aftermath of the 2020 presidential contest, election officials in Georgia, from the secretary of state’s office down to county boards, found themselves in a wholly unexpected position. They had to act as one of the last lines of defense against an onslaught of efforts by a sitting president and his influential allies to overturn the will of the voters.

Now state Republicans are trying to strip these officials of their power.

Buried in an avalanche of voting restrictions currently moving through the Georgia Statehouse are measures that would give G.O.P. lawmakers wide-ranging influence over the mechanics of voting and fundamentally alter the state’s governance of elections. The bill, which could clear the House as soon as Thursday and is likely to be passed by the Senate next week, would allow state lawmakers to seize control of county election boards and erode the power of the secretary of state’s office.

“It’s looking at total control of the election process by elected officials, which is not what it should be,” said Helen Butler, a Democratic county board of elections member. “It’s all about turnout and trying to retain power.”

It’s not just Georgia. In Arizona, Republicans are pushing for control over the rules of the state’s elections. In Iowa, the G.O.P. has installed harsh new criminal penalties for county election officials who enact emergency voting rules. In Tennessee, a Republican legislator is trying to remove a sitting judge who ruled against the party in an election case.

Nationwide, Republican lawmakers in at least eight states controlled by the party are angling to pry power over elections from secretaries of state, governors and nonpartisan election boards.

The maneuvers risk adding an overtly partisan skew to how electoral decisions are made each year, threatening the fairness that is the bedrock of American democracy. The push is intertwined with Republicans’ extraordinary national drive to make it harder for millions of Americans to vote, with legislative and legal attacks on early voting, absentee balloting and automatic voter registration laws.

“Republicans are brazenly trying to seize local and state election authority in an unprecedented power grab,” said Stacey Abrams, the Democratic voting rights advocate who served as the minority leader in the Georgia State House. She said it was “intended to alter election outcomes and remove state and county election officials who refuse to put party above the people.”

She added, “Had their grand plan been law in 2020, the numerous attempts by state legislatures to overturn the will of the voters would have succeeded.”

As Mr. Trump carried out his pressure campaign to try to overturn the election results in swing states, he found many sympathetic lawmakers willing to go along with him — but he was rebuffed by numerous election officials, as well as state and federal courts.

The new legislation across the country would systematically remove the checks that stood in Mr. Trump’s way, injecting new political influence over electors, county election boards and the certification process. In doing so, the Republican effort places a few elected officials who refused to buy into the lies and falsehoods about the election in its cross hairs.

One of those officials is Brad Raffensperger, the Republican secretary of state of Georgia, who rebuffed Mr. Trump in the face of mounting pressure to falsely declare the election rife with fraud, despite multiple audits that affirmed the outcome.

In Georgia’s new voting bill, the State Legislature is looking to strip Mr. Raffensperger of his role as the chair of the State Election Board and make him an ex-officio member without a vote. 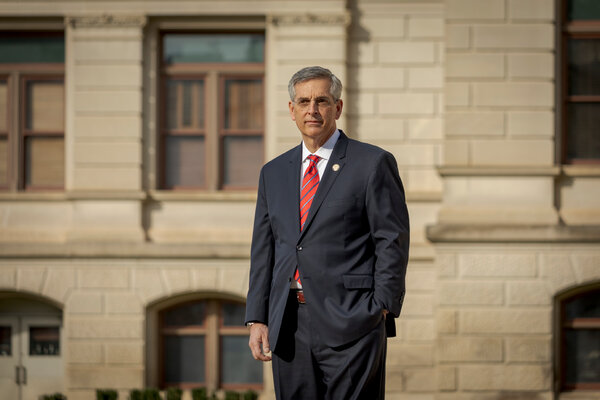 But perhaps more consequential is Republicans’ targeting of county election boards. If the bill becomes law, the State Election Board, under control of the Legislature, would have more authority over these county boards, including the ability to review and fire their members.

“It will give the State Election Board the authority to replace a limited number, it appears, of county election superintendents, and that can be a very partisan tool in the wrong hands,” said David Worley, the sole Democratic member of the five-person state board.

The provision has worried Democratic officials in major left-leaning counties like Fulton County, which is home to Atlanta, and Gwinnett County, as well as their surrounding suburbs. They fear that a partisan state board influenced by the Legislature may enact more restrictive policies for their counties, which are home to the majority of the Democratic voters in the state and a large concentration of the state’s Black voters.

Jon Greenbaum, the chief counsel for the nonpartisan Lawyers’ Committee for Civil Rights Under Law, said Republicans were engaged in an “all-out effort to change the voting rules in lots of ways that would allow for greater opportunity for them to challenge the eligibility of electors,” and that the party would “add micromanagement by state legislatures to the process of running an election.”

State Representative Barry Fleming, a Republican who has been a chief sponsor of the bills in Georgia, did not respond to requests for comment. In a hearing on the bill this month, he defended the provisions, saying, “We as legislators decide how we will actually be elected, because we decide our own boards of elections and those of the counties we are elected from.”

Gov. Brian Kemp of Georgia, a Republican, has not weighed in publicly on the changes to election administration and oversight. Asked for comment, his office offered only that he was in favor of “strengthened voter ID protections.”

At the local level, at least nine Republican counties in Georgia have passed local legislation since November dissolving their current election boards — often composed of three Republicans and two Democrats — and replacing them with a new membership entirely appointed by the county commissioner, resulting in single-party boards.

A new law in Iowa restricting access to voting also targeted county election officials. In addition to barring them from proactively sending out absentee ballot applications, the bill introduced criminal charges for officials who fail to follow the new voting rules.

The threat of increased punishment seemed to be directed at three county election officials in the state, who last year chose to mail absentee ballot applications to all registered voters in their counties, drawing the ire of state Republicans.

“We can be fined heavily now, removed from office,” said one of those officials, Travis Weipert, the Johnson County auditor. “And instead of just saying, ‘Don’t do it again,’ they brought the hammer down on us.”

He joked on Facebook that he would be setting up a GoFundMe page because “I have a pretty good idea which auditors will be fined first.”

Bobby Kaufmann, the Republican state representative in Iowa who sponsored the voting bill, said the county auditors’ actions were “as much the inspiration for the bill as anything,” pointing to their decisions to mail out ballots with prepopulated information.

“There were multiple things that these county auditors did to take the law into their own hands, which is why we put these strict punishments and oversight in for auditors that go beyond the scope of their job,” Mr. Kaufmann said, referring to the auditors who proactively mailed ballots. “That’s the role of the Legislature, not the role of an auditor.”

In Arizona, the Republican-controlled Legislature is pursuing multiple paths to tip the scales of election oversight. One bill gives the Legislature the authority to approve the state election manual, an essential planning document that is drawn up every two years by the secretary of state. It had previously been approved by the governor and the attorney general.

The effort has been roundly criticized by election officials in the state.

“They don’t serve any purpose, except for the Legislature just trying to insert themselves into the process, create obstruction, and say that they did something in the name of election integrity without actually doing anything that does that,” said Katie Hobbs, the Democratic secretary of state in Arizona.

Ms. Hobbs, who was the target of many Republican attacks after the 2020 election, said that purely partisan politics were at play in the bills.

“The Legislature wasn’t interested in control over elections until I got here and happened to have a ‘D’ by my name,” she said.

Michelle Ugenti-Rita, a Republican state senator who has been a sponsor of many of the bills, did not respond to a request for comment.

Republicans are also introducing measures to give them more electoral oversight in some states, like Michigan and New Jersey, that have Democratic governors who would most likely veto such bills. In North Carolina, which also has a Democratic governor, Republican legislators have publicly discussed introducing a similar bill, but have not yet done so.

Efforts in other states to muddle with the mechanics of elections have gone beyond state legislatures. In Michigan, the state Republican Party has indicated that it is unlikely to ask a G.O.P. member of the State Board of Canvassers who chose to certify last year’s election results to return to his post.

That member, Aaron Van Langevelde, sided with the two Democrats on the state board in November, clearing the path for Michigan’s Electoral College votes to be awarded to President Biden.

If Mr. Van Langevelde is ousted from the board, election officials in Michigan worry that the state Republican Party may again seek to hold up certification of a statewide election and possibly succeed, regardless of the success and security of the vote.

It is nearly assured that almost all of these bills will face legal challenges from Democrats, who have signaled that combating the efforts to restrict voting will be a top priority through both federal legislation and the courts.

And Democrats could find a path to challenging some of these laws in deep-red Kansas.

That state’s Republican-led Legislature put forward a proposal similar to those in Georgia and Arizona, seeking to limit the authority of the secretary of state to make emergency decisions and provisions for elections. But the Republican secretary of state, Scott Schwab, informed the Legislature that the proposal “could run afoul” of federal voting laws regarding military and overseas voters.

The legislation was quickly amended the next day.