WASHINGTON — President Trump not only inspired a mob to storm the Capitol on Wednesday — he also brought the Republican Party close to a breaking point.

Having lost the presidency, the House and now the Senate on Mr. Trump’s watch, Republicans are so deeply divided that many are insisting that they must fully break from the president to rebound.

Those divisions were in especially sharp relief this week when scores of House Republicans sided with Mr. Trump in voting to block certification of the election — in a tally taken after the mob rampaged through the Capitol — while dozens of other House members and all but eight Republican senators refused to go along.

Republicans who spent years putting off a reckoning with Mr. Trump over his dangerous behavior are now confronting a disturbing prospect: that Wednesday’s episode of violence, incited by Mr. Trump’s remarks, could linger for decades as a stain on the party — much as the Watergate break-in and the Great Depression shadowed earlier generations of Republicans.

“His conduct over the last eight weeks has been injurious to the country and incredibly harmful to the party,” said Chris Christie, the former governor of New Jersey who was the first major Republican to endorse Mr. Trump.

Mr. Christie said Republicans must “separate message from messenger,” because “I don’t think the messenger can recover from yesterday.”

A small number of Republican officials who have been critical of Mr. Trump in the past, including Representative Adam Kinzinger of Illinois and two governors, Phil Scott of Vermont and Larry Hogan of Maryland, called for Mr. Trump’s removal from office.

Top Republicans ran headlong into an immediate problem, though: Millions of Republican voters are seeking no such separation from Mr. Trump, nor are the House minority leader, Kevin McCarthy, many of his House colleagues and state lawmakers around the country.

For the moment at least, they are far more loyal to their lame-duck president than the traditional party leaders who preceded him.

Still, spurred by the threat many of them felt to their physical safety, and reduced to a political minority following twin losses in Georgia’s Senate runoffs, a swelling group of Republican lawmakers and strategists said publicly what many in their ranks have long voiced privately: It is time to move on.

“What happened in Georgia, what happened today are all indicative that we have to chart a course,” said Senator John Thune of South Dakota, the second-ranking Republican, who Mr. Trump has demanded be unseated in a primary next year. “I think our identity for the past several years was built around an individual, we got to get back to where it’s built on a set of principles and ideas and policies.”

Mr. Thune added that “those conversations” must “happen pretty soon.”

A handful of other Republican officials, including some who are also up for re-election next year, were even more critical.

Asked if Republicans should cut ties with Mr. Trump, Representative Fred Upton of Michigan, a 34-year lawmaker, said, “After today I do.”

Standing after midnight in a Capitol Rotunda still littered with the dirt and detritus left behind by the mob that breached the building, Mr. Upton said: “This is his legacy, not the tax cuts, not the judges. Today.”

Senator Lisa Murkowski of Alaska, who Mr. Trump has also demanded be unseated, offered a measure of deadpan when she said Republicans should part ways with their divisive leader. “I think today is a pretty good reason why,” Ms. Murkowski said walking into a Senate chamber surrounded by machine gun-bearing law enforcement officers. 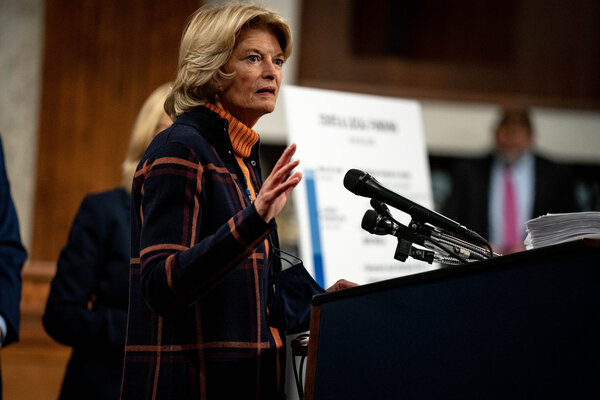 The Republican crackup has been years in the making, but the party will hardly make a clean break — if it makes one at all.

The gulf between Republican leaders and their grass-roots activists has never been wider since the start of the Trump era. And, as when the divisions first emerged after Mr. Trump denigrated Mexicans, Muslims and women, the party is not feuding over any sort of grand policy agenda. It’s simply a personal loyalty test.

While veteran lawmakers were flatly urging a separation, more than 100 House Republicans, unpersuaded by the chaos in the Capitol, continued with their effort to block Congress from certifying President-elect Joseph R. Biden Jr.’s victory. Some adopted conspiracy theories from right-wing news outlets and social media that it was left-wing saboteurs carrying out a false flag operation who ravaged the halls of Congress.

By Thursday morning, Mr. Trump was greeted with applause when he dialed into a breakfast at the winter meeting of the Republican National Committee, most of whose members have become a reflection of the party’s pro-Trump activist wing during his tenure. On Friday, the committee was set to re-elect Mr. Trump’s handpicked committee chair with no opposition.

When it comes to Mr. Trump, few better grasp the difficulty of balancing principle and political survival than Representative Chip Roy of Texas. A former chief of staff to Senator Ted Cruz, Mr. Roy broke with his former boss and was a leader in a group of House conservatives who resisted the president’s push to reject certification of Mr. Biden’s victory.

Now he is facing opprobrium from many Trumpists and wrestling with how the party can harness Trump-inspired grass-roots energy without remaining a cult of personality.

“If the Republican Party is centered solely on President Trump himself, we will fail,” Mr. Roy said. “But if we forget what it was about his message that appealed to people who are really frustrated, then we will also fail.”

Republicans may recover next year the way minority parties usually do in a new president’s first midterm election — with an oppositional message against Democrats. But their longer-term challenges could prove harder to resolve. The party drifted from any unifying policy vision in the Trump years and memorably did not even create a party platform last year.

Former Gov. Jon M. Huntsman Jr. of Utah, a Republican who served as Mr. Trump’s envoy to Russia, said the G.O.P. lacked a coherent set of priorities needed to make it a “relevant governing party.”

“The party has to admit its failures and it has to bring party leadership from all demographics together in pursuit of a common agenda,” Mr. Huntsman said, adding, “We’ve got to basically start from a blank slate.”

Some Republicans, particularly those who were always critical of Mr. Trump, are adamant that his exile will reveal him to be more of a spent force than a power broker. The president’s political legacy, they say, is one of defeat and division.

“These antics have dampened enthusiasm for him and will diminish his influence even more,” said former Senator Jeff Flake, long an opponent of Mr. Trump.

For a number of Republicans who have long been skeptical of Mr. Trump, the events of the last two months have been clarifying. From his initial refusal to concede defeat and his relentless attacks on Republican state officials, which undermined the party’s hopes for winning the Georgia Senate seats, to savaging lawmakers and his own vice president just hours before the Capitol riot, Mr. Trump has proved himself a political arsonist.

“Trump is a political David Koresh,” said Billy Piper, a former chief of staff to the Senate majority leader, Mitch McConnell, referring to the cult leader who died with his followers during an F.B.I. siege in Waco, Texas. “He sees the end coming and wants to burn it all down and take as many with him as possible.”

The violence in Washington appeared to embolden an array of Republican lawmakers, including some who took office only days ago, to condemn Mr. Trump’s political recklessness and urge the party toward a different course. The party’s humiliating double losses in Georgia, the day after Mr. Trump appeared at a rally there, also served to punctuate the growing peril for Republicans in the fastest-growing, more culturally diverse parts of the country, which are on track to amass more political power in the coming decade.

The party faces a threat to its financial base, too. Several of the most powerful business federations in Washington denounced the chaos this week in stinging language, including an extraordinary statement from the normally nonpolitical National Association of Manufacturers that suggested Mr. Pence invoke the 25th Amendment to remove the president from office.

Representative Tom Reed of New York, who has emerged as a leader of more moderate Republicans in the House, said Thursday that the party needed to begin “not worrying about base politics as much, and standing up to that base.” He argued that Republicans should pursue compromise legislation with Mr. Biden on issues like climate change, and forecast that a sizable number of Republicans would take that path.

“If that means standing up to the base in order to achieve something, they’ll do it,” Mr. Reed predicted.

Mr. Reed warned his party that the Democrats would depict the G.O.P. as a dangerous party in 2022 if they did not rebut that charge.

“They’re going to, obviously, paint us with the backdrop of yesterday,” he said, alluding to the mob violence.

Representative Young Kim, a Republican elected two months ago to a purple seat in Southern California, said she had been “disgusted” by the Wednesday assault on the Capitol and blamed Mr. Trump for dishonestly telling his supporters that they had a chance to overturn the election.

“The leaders at the top — in this case, our president — should have taken some responsibility and put down the flame before it ignited to the level that it did,” Ms. Kim said, adding of the mob: “People came because they listened to our leader, the president, telling us: Come to Washington, you have a vote, you have a voice, you can change the outcome. Well, that was simply not true.”

Ms. Kim, who is one of a cohort of Republican female and minority candidates who helped the party cut deeply into the Democratic majority in the last election, acknowledged that she would most likely face “some blowback from the base” for voting to certify Mr. Biden’s election. But she said that should not be a primary consideration as Republicans emerge from the Trump era.

“We need to be able to stand up and use our own independent judgment,” she said.