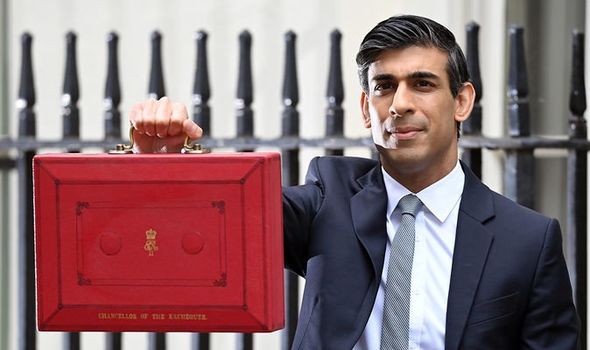 The Treasury select committee said Rishi Sunak’s desire to cut taxes will prove difficult as the country recovers from the pandemic. Increases in government spending and rising inflation make cuts even more difficult, they said.

“It already appears to be a significant challenge for the tax burden, as a percentage of GDP, to be lower at the end of this Parliament than at the beginning, because the Chancellor’s tax rises have already been announced and his fiscal headroom to reduce them is small,” the report says.

“If the Chancellor wishes to be able to cut taxes later in this Parliament while still meeting his fiscal rules, he may have to identify areas of departmental spending where he can reduce spending in real terms.”

While MPs said Mr Sunak, left, had a difficult job balancing the books at the last Budget, they said the Office for Budget Responsibility believes the Treasury has a 55 to 60 percent chance of hitting his targets.

Committee chairman Mel Stride MP said: “In October, there was little room for manoeuvre but there has been positive news from the public finances since then.”

He added: “Significant risks remain, most notably from inflation.”

The report suggested that focus on driving higher wages, alongside rises in the National Living Wage, could contribute to higher inflation.

The MPs warned: “Setting out an economic policy of promoting high wage growth that is not accompanied by increases in productivity will be inflationary and risks contributing to a wage price spiral.”