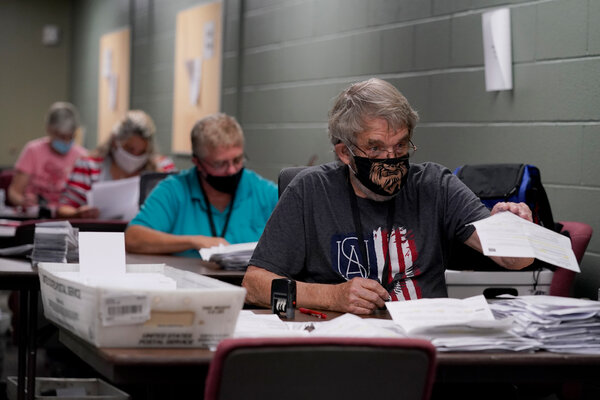 WASHINGTON — American intelligence officials have seen an uptick in Russian disinformation about mail-in ballots as President Trump has escalated his attacks on voting by mail, Representative Adam B. Schiff, the Democratic chairman of the House Intelligence Committee, said in an interview.

American intelligence agencies have not explicitly linked the increase in Russian disinformation operations to the president’s comments. They would not make such an link without specific intelligence about the Kremlin’s marching orders. Intelligence and other officials acknowledged that Russia always focuses its disinformation efforts on existing controversies to amplify ongoing arguments.

Mr. Trump’s false assertions have also fueled the spread of misperceptions about widespread mail-in voting. Experts have repeatedly said absentee voting is secure, and there was little public controversy over it until the president began his attacks.

After Mr. Trump began stepping up his criticism of mail-in voting, Mr. Schiff, Democrat of California, asked the intelligence agencies he has oversight over to track any rise in Russian disinformation efforts.

“Sure enough, it wasn’t long before the intelligence community started seeing exactly that,” Mr. Schiff said. “It was too enticing and predictable an option for the Russians. They have been amplifying Trump’s false attacks on absentee voting.”

Intelligence officials have said they have seen no attempts by the Russians or other foreign powers to interfere with mail-in voting, spread fake ballots or change absentee vote counts.

On Monday, the F.B.I. and the Homeland Security Department’s Cybersecurity and Infrastructure Security Agency warned about foreign intelligence services and hackers spreading disinformation about voting systems to undermine confidence in the election.

Hackers have been spreading false information about compromised voting systems in an attempt to manipulate public opinion and cast doubt on the integrity of the election, according to the new warning.

Mr. Schiff predicted that if the presidential vote is close and counting absentee ballots takes time, Russia and other foreign powers would most likely step up their disinformation campaigns, amplifying Mr. Trump’s criticism of mail-in votes and accusations of a rigged election.

What You Need to Know About Voting