Though the presentation stunned senators who lived through the rampage into silence, only six Republicans joined Democrats in clearing the way for the case to be heard, the second indication in two weeks that Mr. Trump is all but certain to be acquitted.

“The result of this trial is preordained,” Senator Ted Cruz, Republican of Texas, said flatly after the 56-to-44 vote. “President Trump will be acquitted.”

Even so, the nine House Democrats prosecuting the former president aimed their opening arguments squarely at Republicans who had the power to change the outcome. They cited a wide array of conservative legal scholars to argue that the Senate not only had the right to try a former president for official misconduct, but an obligation. And they offered a raw and deeply emotional appeal from the well of the Senate, where a month before lawmakers had taken shelter as the pro-Trump mob closed in.

“Senators, this cannot be our future,” said Representative Jamie Raskin of Maryland, the lead manager, as he fought back tears. He described being locked inside the House chamber while colleagues called loved ones “to say goodbye” and his own daughter and son-in-law feared for their lives nearby.

“This cannot be the future of America,” he continued. “We cannot have presidents inciting and mobilizing mob violence against our government and our institutions because they refuse to accept the will of the people.” 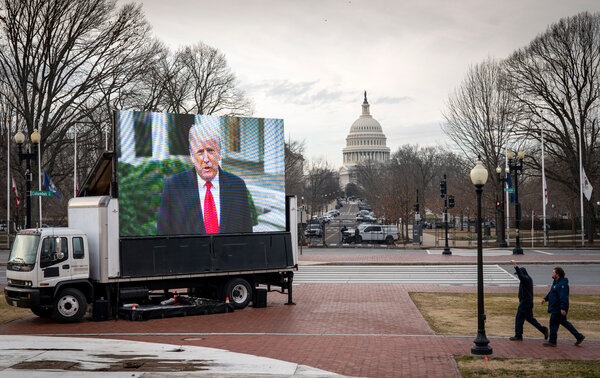 It was the start of a case that Mr. Raskin and his team will begin prosecuting in full on Wednesday that seeks to prove that Mr. Trump spent his final months in office trying to overthrow the election, then organized his supporters to rally against his loss and ultimately egged them on to march to the Capitol and stage a violent riot as Congress met to formalize President-elect Joseph R. Biden Jr.’s victory.

They faced off against a hastily assembled defense team for Mr. Trump that offered an at-times meandering presentation, ultimately arguing that trying the former president would violate the Constitution. It began with a circuitous presentation from Bruce L. Castor Jr., who complimented the compelling case made by the House managers and then launched into a speech that appeared to confuse and bore some senators in both parties.

His partner David I. Schoen was sharper, asserting that Democrats were driven by an “insatiable lust” to destroy Mr. Trump, and warning that they would instead damage the country by setting a new standard to pursue former officials.

What You Need to Know