President Trump and Joseph R. Biden Jr. appeared onstage together for the first time on Tuesday. It was not exactly a debate.

Shouting, interruptions and often incoherent cross talk filled the air as Mr. Trump purposefully and repeatedly heckled and blurted over his rival and the moderator alike in a 90-minute melee that showcased the president’s sense of urgency to upend a race in which polls show him trailing.

Mr. Biden labored to get his points in over Mr. Trump’s stream of interjections, turning directly to the camera for refuge from a scrum that hardly represented a contest of ideas. But Mr. Biden did not stumble, contradicting months of questions from the Trump campaign about his mental fitness, and Mr. Trump seemed to do little to bring over voters who were not already part of his base.

The impact on the race of the messy affair — given that 90 percent of voters say they are already decided — is an open question. Here are six takeaways from the first debate.

Trump trampled over everything. 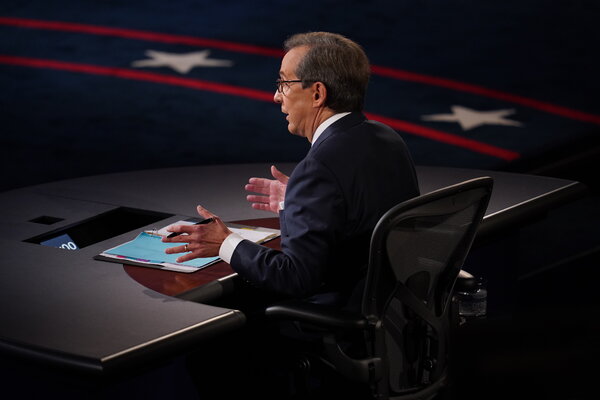 From the opening bell, Mr. Trump came out as an aggressor, speaking over Mr. Biden in what seemed to be almost din-by-design: Pull the former vice president, who has run as a statesman promising to restore the soul of America, into a mud-slinging contest.

He bulldozed Mr. Biden and the moderator, Chris Wallace, throughout the evening. But his goal, other than making for a convoluted contest, was less clear. Mr. Trump seemed principally focused on undercutting and disorienting Mr. Biden, rather than on presenting an agenda or a vision for a second term in the White House.

“I’ve seen better-organized food fights at summer camp,” said Michael Steel, a Republican strategist. “But Trump needed a clear ‘W,’ and he didn’t get it.”

Mr. Biden’s own performance was mostly adequate. He swallowed some of his own lines, and Mr. Trump talked over others.

Before the debate, Mr. Wallace had said that, if successful, his job was to be “as invisible as possible.” He sometimes managed to recede, though at other times he was caught up in the shout-fest. Rarely did he exert control over the chaos. “If you want to switch seats?” he offered gamely at one point to Mr. Trump.

The performance kept the focus squarely on Mr. Trump — often where he seems to like it — but also where the Biden campaign wants all the attention in a 2020 election the Democrat has cast as a referendum on the current president.

Biden, at his strongest, pivoted to the camera — and away from Trump.

Mr. Biden’s visceral dislike of Mr. Trump practically burst through the screen. He told Mr. Trump to shut up. He called him a clown and a liar. He tagged him as a racist. “You’re the worst president America has ever had,” he said at one point. “Keep yapping, man,” he said at another.

But for the most part, Mr. Biden succeeded in avoiding the chum that Mr. Trump was tossing into the debate water. Instead, he kept turning — physically — to face the cameras and address the American people instead of his chattering rival.

“This is not about my family or his family,” Mr. Biden at one point, after Mr. Trump tried to bait him with an attack on his son Hunter. “It’s about your family. The American people. He doesn’t want to talk about what you need.”

The former vice president was strongest and most comfortable on the issues that he has focused on overwhelmingly in the last six months: the coronavirus pandemic and the resulting economic downturn.

“How well are you doing?” Mr. Biden asked the television audience about the economy, casting Mr. Trump as the candidate of the well-to-do, seizing on the recent report from The New York Times that Mr. Trump had paid only $750 in federal income taxes in both 2016 and 2017.

Turning to the cameras gave Mr. Biden refuge from the constant stream of words coming from across the stage, and it helped him land some of his more effective and empathetic lines — an area that his advisers see as crucial to his appeal.

When Mr. Trump bragged about his large rallies that are being held against the guidance of many public health officials, Mr. Biden said, “He’s not worried about you.”

Mr. Trump is the president. He held his convention speech on the White House grounds. But he found some of his greatest success four years ago when running against Hillary Clinton as a failed Washington insider. And he is not ready to give up that angle in 2020.

In the 2016 debates, Mr. Trump hammered Mrs. Clinton over her failure to fundamentally change the country. “She’s been doing this for 30 years,” he said then.

He reprised the same line almost verbatim against Mr. Biden. “Why didn’t you do it over the last 25 years?” Mr. Trump challenged him about overhauling the tax code.

Like it was for Mrs. Clinton, it was at times a hard attack for Mr. Biden to answer. But unlike her, he had Mr. Trump’s record to slash at.

“He’s going to be the first president of the United States,” Mr. Biden countered at one point, “to leave office having fewer jobs in his administration when he became president.”

Trump would not condemn white supremacy or urge his supporters to stay calm.

One of the chief reasons Mr. Biden has said he is running for president as a 77-year-old is because of the white nationalists who gathered in Charlottesville, Va., in 2017 and Mr. Trump’s unwillingness to condemn them.

The president declined to condemn white supremacists again on Tuesday, despite being asked directly by Mr. Wallace if he would do so.

“I’m willing to do that,” Mr. Trump began, before instead saying that “almost everything I see is from the left wing. Not from the right.”

Eventually, after Mr. Biden suggested he condemn the Proud Boys, a far-right organization widely condemned as a hate group, Mr. Trump declared, “Proud Boys: Stand back and stand by.”

It was a moment likely to outlast the night.

Representative Ro Khanna, Democrat of California, said: “The problem is not that Trump refused to condemn white supremacy. It’s much worse. It’s that he acknowledged he was their leader by telling them to ‘Stand by.’”

Later, Mr. Trump also refused to say he would abide by the results of the election and declined to tell his supporters to stay calm and avoid civil unrest.

“If I see tens of thousands of ballots, I can’t go along with that,” Mr. Trump said, urging his supporters go to polls and “watch very carefully.”

Mr. Biden said he would abide by the results and urged calm.

Trump did little to address the gender gap.

Mr. Biden has staked himself to a steady lead in the race largely due a historic gender gap: Women are supporting him far more than Mr. Trump, and by a far greater margin than Mr. Trump’s advantage among men. While Mr. Trump tried at times to explicitly tailor his points to suburban women, who have been at the center of his demographic erosion, his bullying performance seemed unlikely to win them back.

Mr. Trump has long seen politics in terms of strength and weakness, winning and losing, but his interruptions and self-aggrandizing seemed ill-suited to expanding his political coalition.

“Unless his strategy was to alienate more women to see if that helps him pick up more men, no,” said Sarah Isgur, who was a spokeswoman for Jeff Sessions when he was serving as attorney general in the Trump administration and who is now a writer for The Dispatch, a conservative news site.

Or as Anne Caprara, a Democratic strategist and chief of staff to Gov. J.B. Pritzker of Illinois, put it, “I don’t know any woman watching that who isn’t going to be disgusted by everything Trump did.”

Mr. Trump’s struggles in the suburbs are, in part, a result of his diminishing support among college-educated voters. His mocking of Mr. Biden’s decision to regularly wear a mask — which health officials have recommended — underscored his rejection of science when it suits his political purposes.

”I don’t wear a mask like him,” Mr. Trump said. “Every time you see him, he’s got a mask. He could be speaking 200 feet away from it, and he shows up with the biggest mask I’ve seen.”

Beyond his attacks on Mr. Biden’s mental fitness — which redounded to Mr. Biden’s benefit by driving down expectations for his performance — one of Mr. Trump’s most consistent lines of attack has been that Mr. Biden is actually a leftist or even a socialist masquerading as a centrist.

Mr. Trump, whose narrow 2016 victory was aided by disaffected liberal supporters of Senator Bernie Sanders who either stayed home or voted for a third party, has worked hard to foment ideological divisions among Democrats.

Mr. Biden repeatedly took the opportunities on Tuesday to distance himself from his party’s left wing — without denouncing them. And he left little doubt who was in charge.

“The party is me, right now," Mr. Biden said. “I am the Democratic Party.”

He said his eventual stance on adding seats to the Supreme Court — on which he has avoided taking a position — would become the party line, and he rejected the Green New Deal without looking down on expansive environmentalism.

“I support the Biden plan,” he said.

Mr. Biden’s delivery was not always forceful. He did occasionally lose his cool and succumb to Mr. Trump’s barrage of taunts. But he mostly emerged unscathed, and for most Democrats, anything but a loss was welcomed as a clear win.

The first presidential debate between President Trump and Joe Biden devolved into a brawl, as Mr. Trump urgently tried to shake up the race. Here are six takeaways.