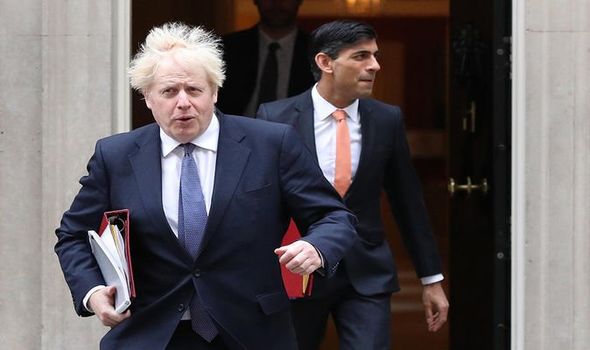 In the note, Mr Sunak said that the UK was “out of step” with the rest of the world. But Mr Johnson reportedly told his allies that by writing the letter, which was copied to Grant Shapps’s Transport Department, it was “bound” to be leaked.

He is said to have warned that he could move Mr Sunak to health, where former Chancellor Sajid Javid became the Secretary of State six weeks ago.

Mr Johnson was said to have been “apoplectic”, “raging” or “tonto” when he met senior Downing Street aides last Monday, the Sunday Times claimed.

A senior source told the newspaper: “He said, ‘I’ve been thinking about it. Maybe it’s time we looked at Rishi as the next secretary of state for health.

He could potentially do a very good job there.’

“In an open meeting, he then suggested the Chancellor could be demoted in the next reshuffle.”

Mr Johnson, who has a reputation for off-the-cuff remarks made half in jest, is unlikely to carry out his threat.

A Treasury source said: “The Chancellor is solely focused on securing the country’s economic recovery and continuing to protect and create jobs.”

The leak of the comments, reportedly made at the same meeting last Monday, will do little to help relations between No 10 and No 11.

The Chancellor is preparing for a tough spending review later this year as he attempts to repair the public finances following the Covid crisis.

That could put him on a collision course with the Prime Minister, who has promised there can be no return to austerity.

Although a reshuffle is not expected imminently, the Sunday Times reported that Mr Johnson has previously considered International Trade Secretary Liz Truss as a potential chancellor, with Jacob Rees-Mogg as her deputy. A source said: “The Prime Minister keeps talking about Liz Truss.

“He’s always got on quite well with her. He thinks she’s controllable.”

The revelation comes amid growing tensions between the PM and Chancellor as Mr Johnson finalises a set of expensive new policies to be announced in September.

He is close to agreeing the details of a new £10billion-a-year “health tax” to tackle the backlog in NHS appointments and to start to reform the care system for the elderly.

Sources say Mr Johnson and Mr Sunak are “ironing out a few wrinkles” to finalise the plan, which would see National Insurance rise by at least one per cent for workers and employers.

Mr Johnson will also be drawing up environmental policies ahead of hosting the COP26 climate change summit in Glasgow from October 31 to November 12, and announcing a winter plan on Covid-proofing the economy and the NHS.

A fresh crackdown on crime is also expected, including measures to break “county lines” drugs gangs and an explosion in cocaine use among the middle classes.

pension guarantee, as the Government faces paying an extra £4billion under current rules. This will come on top of the Chancellor conducting a spending review.