Using a Supreme Court ruling as its guide, the department will issue guidance that says discrimination against gay and transgender students is prohibited under the 1972 law. 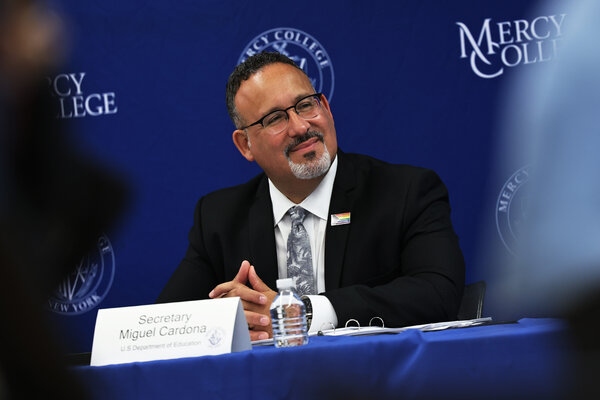 WASHINGTON — A year after the Supreme Court ruled that protections in the Civil Rights Act against discrimination in the workplace extended to gay and transgender people, the Education Department plans to say on Wednesday that it has interpreted the ruling to mean that those protections also extend to students.

The department will say that discrimination against gay and transgender students is prohibited under Title IX, a 1972 law that prohibits sex-based discrimination in federally funded schools. The law has become a political cudgel in the culture wars over sex and education.

“We just want to double down on our expectations,” Miguel A. Cardona, the education secretary, said in an interview. “Students cannot be discriminated against because of their sexual orientation or their gender identity.”

The Education Department’s interpretation of Title IX is the opposite of the stance taken by the Trump administration, which maintained that transgender students were not entitled to protections and threatened last year to withhold federal aid from schools that allowed transgender athletes to participate in scholastic sports. During the last weeks of the Trump administration, the Education Department issued guidance saying that the Supreme Court ruling did not offer transgender students protections.

Since Inauguration Day, the Biden administration has conducted a sweeping effort to rescind, revise or revoke a number of Trump-era policies that rolled back transgender rights. The Department of Housing and Urban Affairs, the Justice Department and the Department of Health and Human Services have all issued guidance affirming the rights of transgender Americans.