A firm started by a group of Trump lawyers highlights the campaign’s connections to the false conspiracy theory and reinforces how deeply it has taken hold in the Republican Party. 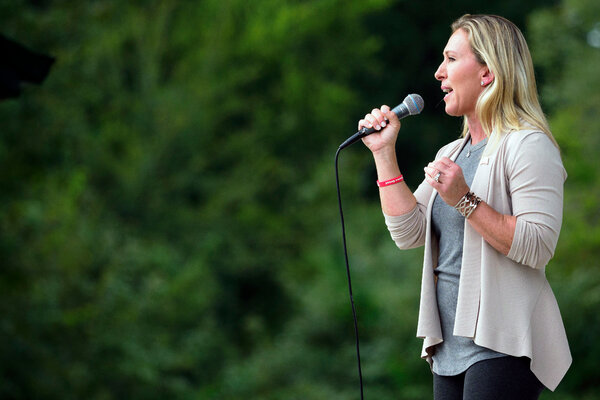 Senior lawyers for the Trump campaign set up a small law firm last year that is working for Marjorie Taylor Greene, a Republican House candidate in Georgia with a history of promoting QAnon, a pro-Trump conspiracy theory.

While federal filings show that the firm, Elections L.L.C., principally collects fees from the president’s campaign and the Republican National Committee, it also does work for a number of congressional candidates, and none more so than Ms. Greene, underscoring the connections between QAnon and Mr. Trump and his inner circle. The latest example came Thursday night, when President Trump repeatedly declined to disavow QAnon at a televised town hall.

Ms. Greene is one of several Republican candidates who openly espouse the collection of bogus and bizarre theories embraced by followers of QAnon, who have been labeled a potential domestic terror threat by the F.B.I. and who former President Barack Obama warned Wednesday were infiltrating the mainstream of the Republican Party. QAnon imagines, falsely, that a Satanic cabal of pedophile Democrats are plotting against Mr. Trump, plays on anti-Semitic tropes and stokes real world violence — and has been expounded on at length by Ms. Greene in videos.

Elections L.L.C. was founded last year by Justin Clark, Mr. Trump’s deputy campaign manager, and Stefan Passantino, a former top ethics lawyer in the Trump White House. Matthew Morgan, the Trump campaign’s counsel, is also a partner at the firm. Ms. Greene’s campaign has made 14 payments to the firm since last year, worth nearly $70,000 in total, the most of any congressional campaign.

Mr. Passantino appears in records filed with the Georgia secretary of state as the lawyer who incorporated Ms. Greene’s campaign committee, though the full scope of his work for the candidate is unclear. He also does legal work for a Georgia political operative, Jason D. Boles, who is a personal friend of Ms. Greene’s and who helped set up her campaign. (Mr. Boles has been a recent subject of controversy, after it emerged that he had helped bankroll an effort to infiltrate and discredit voting rights groups in North Carolina.)

Mr. Passantino worked in the White House as a deputy counsel in charge of ethics policy until 2018, and among other things, he dealt with personal financial disclosures related to the president’s eldest daughter and adviser, Ivanka Trump. Last year, he was hired by the Trump Organization to handle investigations by Democrats in the House of Representatives. Some of the money that the Trump campaign has paid to Elections L.L.C. has also been directed to him, federal filings show, though it is not clear for what work.

Neither Mr. Clark, Mr. Morgan nor Mr. Passantino commented for this story. In a statement, the Trump campaign said, “Elections L.L.C. is a law firm like many others that do campaign work. Just like any other law firm, its lawyers have clients that have no relationship to other lawyers of the firm or their clients.”