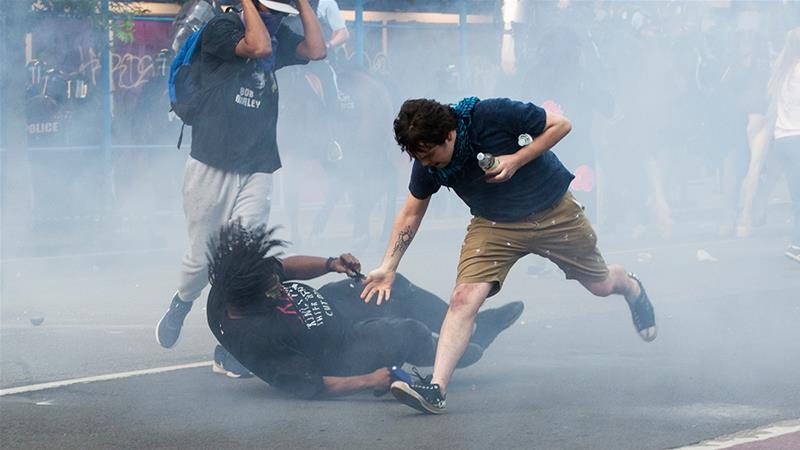 President Donald Trump and some of his supporters have claimed authorities did not use tear gas against people in a crackdown outside the White House this week. There is evidence they did, according to an Associated Press fact check.

Law enforcement officials have shied away from describing crowd-dispersing chemical tools as tear gas; it evokes police gassing citizens or the horrors of war. But giving those tools a more antiseptic name does not change the reality on the ground.

Federal institutions, such as the Centers for Disease Control and Prevention (CDC) and the US Army Medical Research Institute of Chemical Defense, have listed tear gas as the common term for riot-control agents. Whether the common or formal term is used, the effects on people are the same.

Those effects were well documented when authorities forcefully cleared a crowd from outside the White House before Trump walked to St John’s Church across Lafayette Park on Monday to be photographed holding a Bible.

“They didn’t use tear gas,” Trump said Wednesday on Fox News Radio. The US Park Police denied using tear gas, yet acknowledged deploying a pepper compound, which the CDC and other scientific organisations list as one form of tear gas.

Authorities, who came from more than a half-dozen agencies besides the Park Police, set loose several wafting compounds, causing people to cough and gag as they scattered, their eyes red and streaming in some cases. They displayed the results of exposure to tear gas – tears, for example. 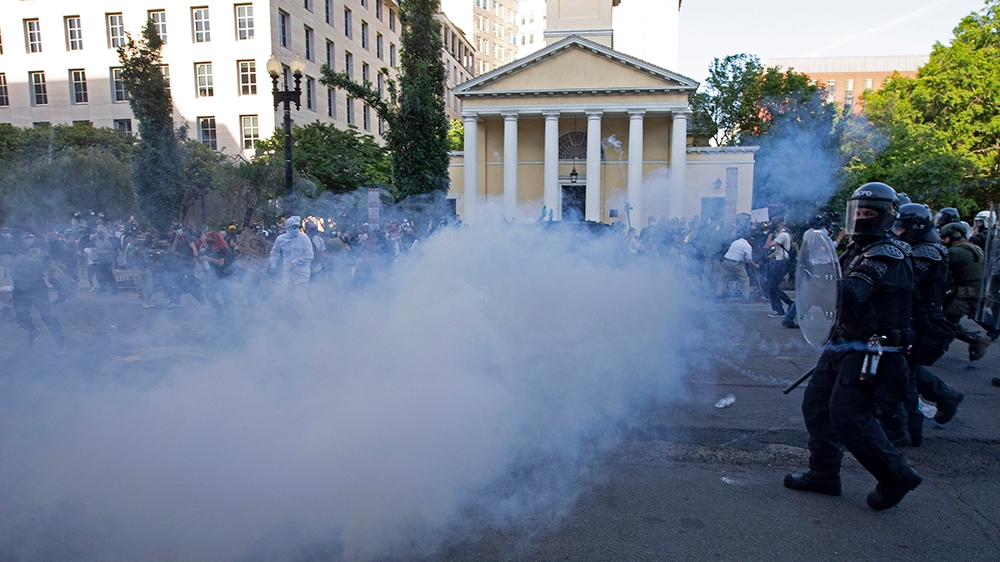 “Tear gas is anything that makes you cry,” said Dr Lynn Goldman, dean of the George Washington University Milken Institute School of Public Health, speaking of chemicals used in crowd dispersal. “Pepper spray is a tear gas. But there are all kinds of other ones, too.”

Compounds that are listed as riot-control agents make people temporarily unable to function by irritating their eyes, mouth, throat, lungs and skin, the CDC said. They are “sometimes referred to as ‘tear gas,'” according to a CDC fact sheet.

The Handbook of Toxicology of Chemical Warfare Agents also uses tear gas as an informal umbrella term for riot-control agents and names pepper spray as one kind. In the unrest near the White House, officers shot plastic balls with pepper powder from what looked like modified paintball guns, and dispersed other compounds in a stinging fog.

The handbook also said riot-control agents are “popularly referred to as ‘tear gas’ or ‘pepper spray.'” It said they may be combined with an explosive substance in grenades, released in a smoke of particles from handheld devices or sprayed in a solution.

The disabling effects of tear gas are designed to be short-lived, but the CDC says prolonged exposure “may lead to long-term effects such as eye problems, including scarring, glaucoma and cataracts, and may possibly cause breathing problems such as asthma.”

An Army research institute paper in 2009 cited riot-control agents and tear gas interchangeably. It said “tear gas” is something of a misnomer, because the agents tend not to be gaseous and modern compounds can affect a wider variety of organs as well as the eyes, lungs and digestive tract that are historically the targets of tear gas.

He said newer compounds, which may have been used in the “pepper ball” projectiles deployed at the protest, might or might not fit a traditional definition of tear gas but are as potent and come with scant research on their safety. Any difference is semantic, he said.

“There’s been very little research on tear gas being done in the United States,” he said, and “no research backing up the use levels that are deployed now.”

Jordt said the two main categories of crowd-clearing irritants – known as CS and OC – both activate the pain-sensing nervous system sharply, which in turn can make the body more susceptible to a virus. “I’m just very concerned this might increase the likelihood of infection” in the coronavirus pandemic, he said, or trigger more extreme reactions in people who have the virus but are not showing symptoms.

“To use these highly irritating agents on protesters is not a good idea,” he said. “It’s really shocking that it is used to that extent.”