Home » Politics » Trump Said He Was the President of Manufacturing. Then Disaster Struck.

For a leader who has embraced the language of a wartime president, it is as if the Pentagon asked for missiles and bombers but wouldn’t say how many or where they should be delivered. 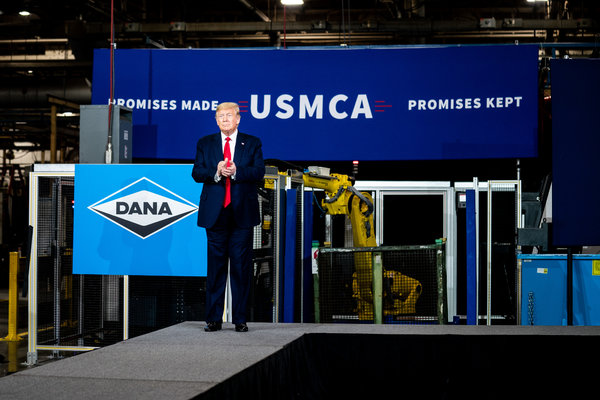 When President Trump came to office, he promised a new day with America’s manufacturers, casting himself as the first president who understood their needs. He toured factory floors, often handing out his signature “Make America Great Again” hats.

Yet in the first national crisis that required harnessing American manufacturing ingenuity and ramping up production of ventilators, perhaps the most crucial piece of equipment for patients in crisis, the White House’s ability to gather the power of American industry crumpled.

It was unable to communicate how many ventilators it would need or how quickly it would need them. Mr. Trump set states off on a mad scramble to find their own, leading to bidding wars against one another. Even today it is unclear who is deciding where the new American production will be directed — to the highest bidders or to the cities that need them most.

A week after praising General Motors and a small ventilator manufacturer, Ventec Life Systems, for their voluntary efforts to combine cutting-edge technology with G.M.’s expertise at supply chains and mass production, the president blew up at the world’s largest carmaker, accusing its chief executive, Mary T. Barra, of moving too slowly and trying to “rip off” the federal government. In fact, G.M. and Ventec had already signed a partnership — without government help — to ramp up production.

Interviews with White House officials, industry executives and outsiders who tried to intervene make two problems clear. Mr. Trump’s first mistake was recognizing the problem far too late, even though his own medical experts had identified a probable shortage of ventilators as a critical problem in late January, as panic set in that the virus was headed to the United States. Had the president acted sooner, thousands of new ventilators would probably be coming off production lines next month, when they are likely to be desperately needed.

And even after the problem was recognized, and the president’s son-in-law and senior adviser, Jared Kushner, took over the process, both the White House and the Federal Emergency Management Agency struggled to define what was needed, who would pay for it and how to solve the problem of supply chains that stretched across more than a dozen countries.

“We’re going to have plenty,” Mr. Trump said Friday afternoon, declaring that he was invoking the Defense Production Act, a Korean War-era law, to force the companies to make more. But he gave no numbers — and glided past the complexities of getting between 700 and 1,500 components from more than a dozen nations.