At a rally in Johnstown, Pa., the president’s aides nudged him toward a populist script. But he also had other issues in mind. 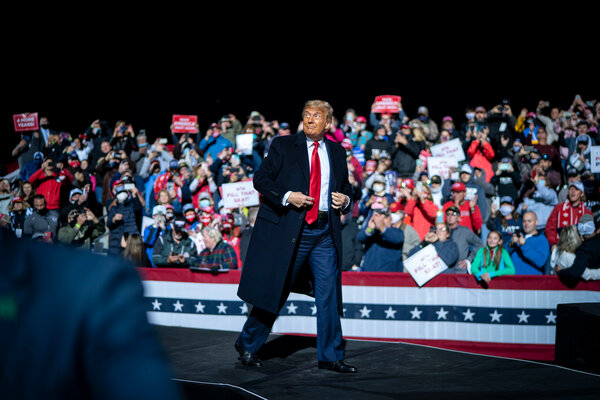 WASHINGTON — With just three weeks until Election Day, and President Trump on the defensive in every major battleground state, the president’s top aides know they must change the trajectory of the race.

So as Mr. Trump returns to the campaign trail this week after being hospitalized for his coronavirus infection, his advisers are sending him out with a teleprompter, as they at times did before his diagnosis, in hopes he’ll drive a more coherent message against his Democratic opponent, former Vice President Joseph R. Biden Jr.

And on Tuesday night, in a more pointed effort to nudge Mr. Trump toward his script, the president’s campaign also shared excerpts with reporters of the speech they said he would deliver upon landing for his rally in Johnstown, Pa., about 70 miles east of Pittsburgh.

Mr. Trump did read some of the staff-written remarks in his speech, which lasted just over an hour.

Trying to revive his 2016 coalition in a part of Pennsylvania where he needs to run up his margins, the president scorned Mr. Biden as “a servant of the radical globalists” who “shipped away your jobs, shut down your factories and, you know it because you really suffered right in this area, threw open your borders and ravaged our cities.”

Yet the president also made clear he had other issues on his mind besides the populist message that his campaign wanted him to give in Johnstown. Namely, how embarrassing it would be to lose to an opponent he has repeatedly mocked as being senile.