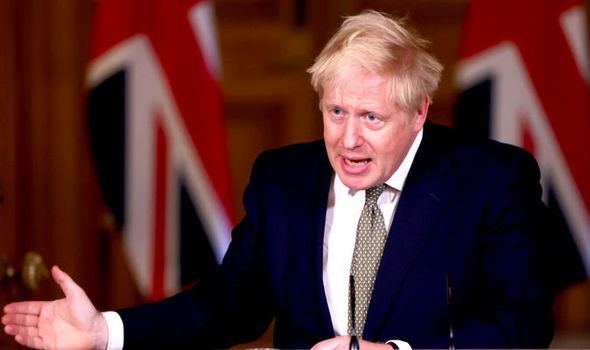 The Prime Minister’s official spokesman criticised the move as “unjustified” and said Emmanuel Macron’s government was being spoken to about the issue.

French fisheries have accused the Government of being slow in issuing post-Brexit licences for EU fisheries to catch in UK waters.

They claim 80 percent of vessels from the northern Hauts-de-France region have not yet been granted licences.

As many as 80 fishermen set off flares on Boulogne docks and created barricades to block trucks seeking to transport fish to the area’s seafood processing centre.

Reacting, a No10 official said this afternoon: “We take an evidenced-based approach to licensing EU fishing vessels using the information that’s supplied to us by the European Commission.

“We do not recognise the figures being shared by the French fishing industry.

“We have issued licences to all vessels that have met the criteria and have provided the relevant information, so we consider the reaction to be unjustified.”

As part of the Brexit trade agreement brokered between the UK and EU at the end of last year, EU fisheries can continue to access UK waters but must apply for a licence in order to do so.

The share of the catch in UK waters will also decrease over a period of five years under the terms of the deal, with UK fisheries benefiting.

British boats will have access to an extra £145million worth of fish by 2026.

Two thirds of fish landed in the UK are exported to the continent.

Blocking the routes for lorries carrying the catch, Bruno Margolle, who heads the main fishermen’s cooperative in Boulogne-sur-Mer, criticised the slow rollout of licences.

He said: “We thought it would be a matter of days. Four months on we’ve barely moved forwards.”