TPS provides hundreds of thousands the right to live and work in the US, based on events in their home countries. 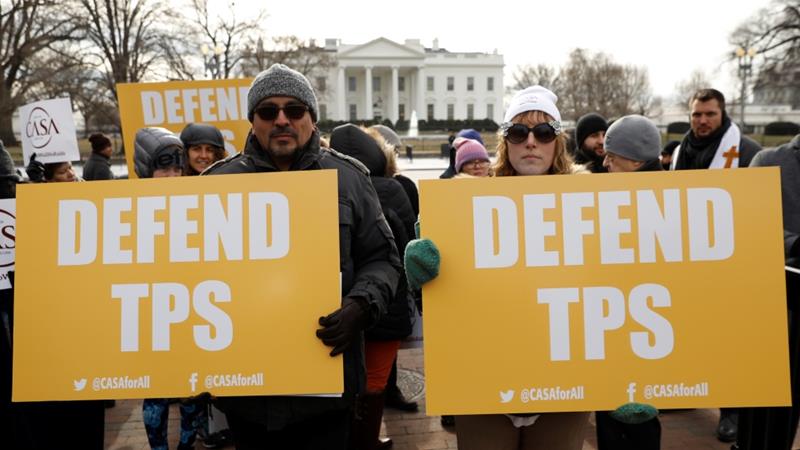 The administration of United States President Donald Trump can end humanitarian protections that have allowed hundreds of thousands of people from El Salvador, Nicaragua, Haiti and Sudan to remain in the US, an appeals court has ruled.

The 9th US Circuit Court of Appeals on Monday lifted a preliminary injunction that had blocked the government from ending Temporary Protected Status, or TPS, for people from those four countries. People from El Salvador would be most affected.

Since 1990, the policy has granted temporary legal status to people from countries affected by natural disasters and civil conflicts. The legal status is often extended, but the Trump administration decided to end it for several countries.

In the appeals court’s majority opinion, Judge Consuelo Callahan wrote: “The decision to designate any foreign country for TPS begins and ends with the Secretary, so long as certain limited statutory criteria are met”, referring to the secretary of the Department of Homeland Security (DHS).

The decision, joined by Judge Ryan Nelson, also said: “The Secretary’s discretion to make TPS determinations, while not without check, is undoubtedly broad and unique in nature”.

Callahan is an appointee of former President George W Bush. Nelson was appointed by Trump, whose change of direction on TPS had been on hold since early in his administration, even as he has moved to restrict other forms of humanitarian status in the US.

He has sharply limited the number of refugees allowed to resettle in the US and taken several measures to dramatically curb access to asylum.

The lawsuit claimed the administration failed to follow proper procedures and that racially motivated comments by the president and his aides about some of the countries drove the decision to end TPS.

The American Civil Liberties Union (ACLU) noted that in 2017, Trump said recent immigrants from Haiti “all have AIDS” and that Nigerians, once seeing the US, would never “go back to their huts” in Africa.

White House pressure on DHS leaders to end TPS did not prove racial motivation and was “neither unusual nor improper,” wrote Judge Callahan.

“While we do not condone the offensive and disparaging nature of the president’s remarks, we find it instructive that these statements occurred primarily in contexts removed from and unrelated to TPS policy or decisions,” Callahan wrote.

“Plaintiffs fail to present even ‘serious questions’ on the merits of their claim that the Secretaries’ TPS terminations were improperly influenced by the President’s ‘animus against non-white, non-European immigrants,'” Callahan wrote, citing “a glaring lack of evidence tying the President’s alleged discriminatory intent to the specific TPS terminations.”

This impacts 400,000 people and their families in the U.S., but it won’t take effect for 6 months. We can stop Trump’s hateful actions.

We must:
✅Continue to fight in the courts
✅Demand an administration protect TPS holders
✅Pass the American Dream and Promise Act https://t.co/JKs8fAXl3h

Judge Morgan Christen, an appointee of former President Barack Obama, dissented, saying the plaintiffs had sufficiently proven DHS acted “arbitrarily” in 2017 when then-Secretary Kirstjen Nielsen announced DHS would not consider events in the TPS recipients’ home countries since they left when determining status.

The ACLU decried the decision, but cautioned that it would not take effect for six months. “We can stop Trump’s hateful actions”, the organisation said in a tweet.

The ultimate outcome may hinge on the presidential election on November 3. Trump’s Democratic challenger Joe Biden promises “an immediate review” of TPS and said he will pursue legislation for longtime residents to remain in the US and seek citizenship.

More than 400,000 people from 10 countries have the protected status, including some 250,000 from El Salvador, according to the Congressional Research Service.

What’s in a Vote-a-Rama?