The European Commission President told MEPs this morning that she “deeply regrets” making the mistake of triggering Article 16 of the Brexit deal last month. Mrs von der Leyen threatened the UK with an export ban of vaccine doses from the EU to Northern Ireland, jeopardising the fragile peace on the island of Ireland. The Commission chief renewed her apologies for the huge mistake made.

But moments after she apologised, Mr Weber demanded the ban is still on the table should the UK refuse to send over to the EU doses of the AstraZeneca vaccine.

He said: “We support cooperation with other states but without being naive as Europeans.

“An export ban on European-produced vaccines must remain on the table in our view. 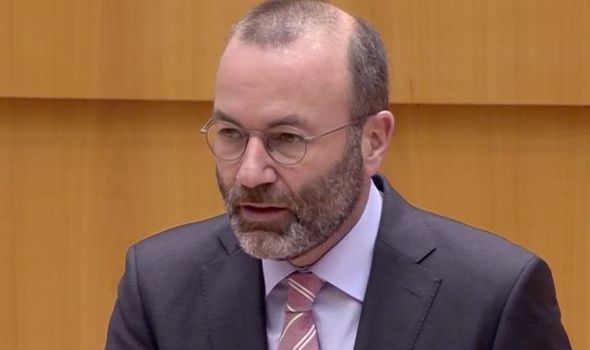 Mrs von der Leyen acknowledged that the European Union was not where it wanted to be in the fight against the coronavirus.

She said: “We were late with the approval.

“We were too optimistic on mass production.

“And perhaps we were also too certain that the orders would actually be delivered on time.”