Italian MEP Elisabetta Gualmini furiously lashed out at blockades being put up by Hungary and Poland on the Covid recovery fund. She insisted that national selfishness was causing paralysis in Europe and needed to be stopped. She said: “It is really time to close up the agreement on the budget, the recovery fund and resources.

“We as MEPs have to rely on the confidence of the future of Europe and revise the unanimity rule as it is a real paralysis in the decision making.

“We can’t be hostages of veto points and national selfishness or despotic leaders.”

Ms Gualmini reiterated the importance of the coming to decisions quickly for the benefit of European citizens. 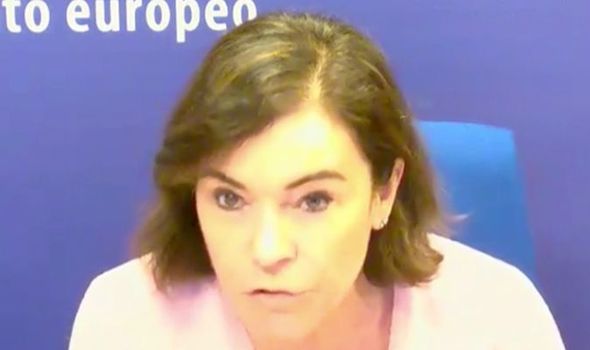 She added: “We can’t rely every time on the last rescue by Angela Merkel like kids with their money.

“This isn’t about our careers it is about giving certainty and acting in favour of the future.”

Italian MEP Marco Zanni also demanded the European Union look at significant changes to its stance towards smaller states in order to prevent vetos from countries like Poland and Hungary.

Mr Zanni accused the bloc of “provoking” Hungary and Poland into vetoing the common budget.

He said: “I think those who are most irresponsible are those who continue to use the rules in a political manner to punish those who aren’t in line with a certain way of thinking.

“And we need to be aware of that because the methods we’re using isn’t working.

“We can’t have a dictatorship of the majority as some people would like.”

He continued: “We need to understand the errors of what we’re doing and the limits of the European Union.

“The error is to want rules which should help us in a moment of need and then, when we find ourselves in difficulty, we suspend the rules.

“So that’s where we need to look to see what the problem is. Are the methods that we use in line with what the European Union is? An inter-governmental agreement between member states which are legitimately different.””