Home » Politics » When It Comes to Big City Elections, Republicans Are in the Wilderness

When Jerry Sanders finished his second term as mayor of San Diego in 2012, he was the most prominent Republican city executive in the country. A former police chief close to the business community, Mr. Sanders appeared to be a political role model for other would-be Republican mayors, a moderate who worked with the Obama administration on urban policy and endorsed gay marriage at a pivotal moment.

These days, Mr. Sanders said, Republicans are out of touch with diverse metropolitan areas. He said Republicans appeared to lack “real solutions” to issues like crime, and lamented the party’s exclusionary message that drives off young people, Hispanics and gay voters in cities like his.

“I don’t think the right has kept up with the times,’’ Mr. Sanders, 70, said in an interview. He said he renounced his party affiliation on Jan. 7, the day after the mob attack on the Capitol.

Across the political map this year, Mr. Sanders’s diagnosis of his former party appears indisputable: In off-year elections from Mr. Sanders’s California to New York City and New Jersey and the increasingly blue state of Virginia with its crucial suburbs of Washington, D.C., the Republican Party’s feeble appeal to the country’s big cities and dense suburbs is on vivid display.

Where the G.O.P. once consistently mounted robust campaigns in many of these areas, the party is now all but locked out of all the major contests of 2021.

The realignment of national politics around urban-versus-rural divisions has seemingly doomed Republicans in these areas as surely as it has all but eradicated the Democratic Party as a force across the Plains and the Upper Mountain West. At the national level, Republicans have largely accepted that trade-off as advantageous, since the structure of the federal government gives disproportionate power to sparsely populated rural states.

But the party’s growing irrelevance in urban and suburban areas also comes at a considerable cost, denying conservatives influence over the policies that govern much of the population and sidelining them in some of the country’s centers of innovation and economic might. The trend has helped turn formerly red states, like Georgia and Arizona, into purple battlegrounds as their largest cities and suburbs have grown larger and more ethnically mixed.

There are a few possible exceptions to the rule for Republicans this year: In Virginia, despite a leftward shift powered by the Washington suburbs, the Republican gubernatorial nominee’s fabulous personal wealth and business-friendly profile could make the race competitive. In Fort Worth, the country’s 12th largest city, a Republican, Mattie Parker, won election as mayor earlier this month.

But Ms. Parker had a distinctive advantage: Fort Worth has nonpartisan elections, allowing her to run as a centrist option without an “R” next to her name. The country’s 11 largest cities are all helmed by Democrats. 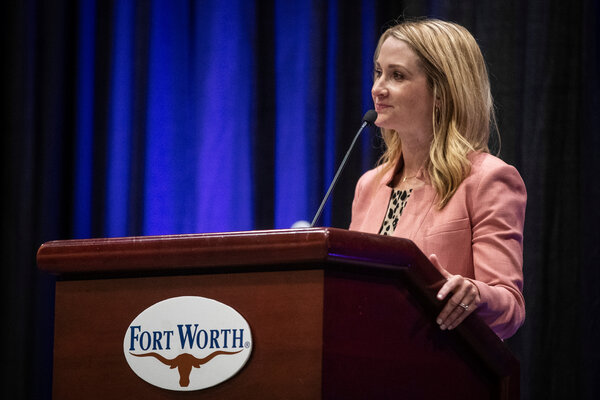 Ms. Parker said in an interview that her party needed to do more to compete in big cities. In her race, she said, voters were receptive to a down-the-middle message about public safety and competent government. But she acknowledged it would be a “real difficult battle” to make Republicans competitive in cities with partisan elections.

“I think they’re starting to realize they’re asleep at the wheel,” Ms. Parker, 37, said of her fellow Republicans. “And they’re realizing the need to mobilize and run good, qualified candidates in big cities, who identify as Republicans.”

Ms. Parker said she had gently separated herself from former President Donald J. Trump, a step the G.O.P. as a whole has been disinclined to take. “When I was asked about the president and the election, I would just say, ‘I operate differently,’” she explained.

It is not only within city limits that Republicans are struggling: The inner-ring suburbs, abundant in states like New Jersey and Virginia, have long spurned Mr. Trump and his allies down ballot. Having embraced the former president’s strategy of racial and geographic polarization, Republicans now find themselves with scant purchase in the culturally dynamic, economically powerful communities that Mr. Trump demonized for half a decade.

Where the G.O.P. maintains influence over metro areas, it is largely in red states where Republican governors and state legislators can impose policy on local leaders from above.

But to Democrats who once battled Republicans for power in big cities and on the coasts, the explanation for the party’s decline there is simple enough.

“It’s not the same Republican Party,” said Representative Donald McEachin of Virginia. “Trump chased off a lot of moderate Republicans, so it’s a much smaller party.”

It is difficult to overstate the extent of the Republican Party’s political decline in big-metro America. While Republicans have long been more aligned with rural, conservative voters than with urban constituencies, the pre-Trump G.O.P. made a point of recruiting serious candidates even in Democratic strongholds like New York City and California. The party pulled off upset victories with some frequency by attacking Democrats on seemingly intractable problems like violent crime, high taxes and wasteful spending.

And Republicans were rewarded with a crop of leaders who helped persuade not just their constituents but the country as a whole that their party was capable of mastering the toughest jobs in government. At the turn of the 21st century, Republican mayors governed cities like New York, Los Angeles and San Diego, and a motorist could drive from Pittsburgh to Provincetown, Mass., without entering a state helmed by a Democratic governor.

Since then, said Joseph J. Lhota, the former M.T.A. chairman who was the Republican nominee for mayor of New York in 2013, the G.O.P. had “completely disappeared” as a force in metro politics.

Lanhee Chen, a former policy adviser to Mitt Romney, said it was obviously “not healthy” for Republicans to write off so many important parts of the country. Mr. Chen, who is based in California, is weighing a campaign for state controller in 2022.

“Competing, and competing to win in the marketplace of ideas, is an important thing for the party to do in Texas and Missouri, of course, but also in California and New York,” Mr. Chen said.

This year Republicans are not making much of an effort to reclaim those once-prized opportunities to govern.

Mr. Trump made incremental gains in 2020 with communities of color in certain metro areas, as his attacks on socialism seemed to resonate with Hispanic and Asian-American voters with roots in countries like Venezuela and Vietnam, as well as with more rural Hispanic voters. But there is no evidence that his party is making a concerted effort to craft a message with broad appeal to urban constituencies.