A picture of two presidents and first ladies led to many Hobbit jokes online. We explain what happened. 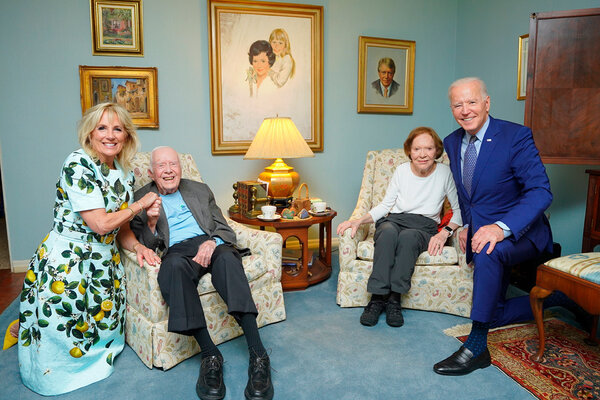 It was a pleasant 86 or so degrees in Plains, Ga., when President Biden and Jill Biden visited former President Jimmy Carter and his wife, Rosalynn Carter, at their home on April 29.

“We just had a nice time,” Mr. Biden said later.

Reporters were not permitted inside, but a photo of the two couples that the Carter Center posted Monday on Twitter — with its toothy grins and teacups — seemed to back this up.

Except one thing was off: At some point during the visit, the Bidens appeared to have turned into giants.

Dr. Biden is 5-foot-6. So far as the world knows. Mr. Carter, 96, stood around 5-foot-10 at his tallest. But even kneeling, she appeared to dwarf him. And Mr. Biden, who is six feet tall, seemed to hover above the man he had come to pay his respects to. It was if the hosts had been turned into Hobbits.

“Did they pull some Gandalf/Hobbit perspective trickery or are the Biden’s actually this gigantic?” one man asked on Twitter. Another user asked if she was “the only one who thinks this looks like a tiny doll museum, and Joe and Jill are giants?”

In a thread on Reddit that was full of Hobbit jokes, others countered that perhaps age had shrunk the former president to three feet. Or maybe, some wondered, there was something going on with the lens.

So which is it?

Reached by phone Adam Schultz, the chief official White House photographer, confirmed that he took the photo but declined to explain. “It’s for people to figure out and think about,” he said.

The answer can be found in Mr. Carter’s gigantic shoes, said Pete Souza, a former chief official White House photographer for President Barack Obama. Compared to the rest of him they look huge.

“That to me is an indication that the foreground was distorted by a super-wide-angle lens,” he said.

Such lenses can be helpful when a photographer is trying to shoot several people in a small room and cannot get far back enough to get everyone in the same frame with another lens. But they are notorious for distorting proportions, Mr. Souza said.

Jaron Schneider, the editor in chief of PetaPixel, a photography and camera news website, had a similar theory.

Wide-angle lenses make objects closer to the camera appear to be much larger than objects that are even just a tiny bit farther away.

Because the Carters are leaning back, the wide-angle lens exaggerates the few inches between them and the Bidens, Mr. Schneider said. Had the Bidens and Carters been seated on exactly the same plane, this effect would not have been so striking. This is why the two men’s shoes seem to be on a similar scale.

The placement of the chairs also exacerbates the distortion, he said. The center of a wide-angle photo tends to look natural. But once you start moving toward the edge of the photo, the proportions get increasingly distorted. Had everyone been huddled around the lamp, the effect would not have been so noticeable.

“Wide-angle lenses have this angle no matter how optically correct they,” Mr. Schneider said, adding that these sorts of optical distortions can be fixed in post production. 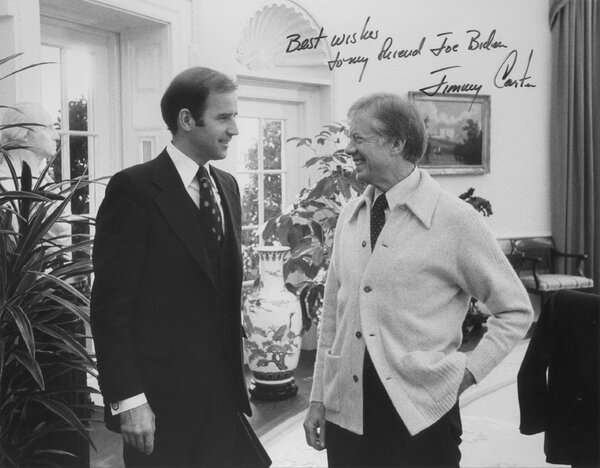 But while editing the photo may have made it look more realistic, that would be frowned upon, said Doug Mills, a photographer assigned to the Washington bureau of The New York Times.

Mr. Mills was outside the Carters’ home during the photo session and saw the flash go off inside. He agreed that it seemed likely that a wide-angle lens was used to solve the problem of capturing all four subjects in a small space

Some asked why the Carter Center would release a distorted photo, or why it was not edited to remove the distortion.

“That would be completely forbidden,” Mr. Mills said. Official White House photographers are supposed to abide by ethical rules similar to those followed by photojournalists, he said.

The picture, for all its amusing flaws, is history.