The two Georgia runoff elections that will determine control of the Senate, and much of President-elect Joseph R. Biden Jr.’s ability to enact a Democratic agenda, are already drawing enormous sums of cash, with more than $125 million pouring into the state in only two weeks.

The two Democratic challengers, the Rev. Raphael Warnock and Jon Ossoff, have each raised huge amounts since Nov. 3, with Dr. Warnock collecting around $40 million and Mr. Ossoff a little less than that, according to two people familiar with their fund-raising hauls. The Senate arm of the Republican Party and the two Republican incumbents, Senators Kelly Loeffler and David Perdue, announced they had pulled in $32 million in just the first six days after the election. And Ms. Loeffler, one of the wealthiest members of Congress who spent $23 million of her own money to make the runoff and can inject millions more at a moment’s notice, has already booked $40 million in television time.

Super PACs on both sides are racing to lock up a shrinking supply of television airtime as ad rates in the Atlanta market skyrocket, with prices this week already higher than in some of the top presidential battlegrounds in October.

The twin Georgia races have swiftly taken center stage in American politics, with campaign visits by potential 2024 Republican candidates like Senators Tom Cotton and Marco Rubio and Vice President Mike Pence. Mr. Biden himself is planning a trip closer to the Jan. 5 runoffs, as both parties vie for supremacy in a state that voted for a Democratic presidential candidate for the first time since 1992.

If both Democrats win the runoffs, they would pull the Senate into a 50-50 tie, which would give Democrats de facto control of the chamber because Kamala Harris, as vice president, would cast the tiebreaking vote.

Even the narrowest of Democratic majorities would considerably ease Mr. Biden’s path to confirming his cabinet picks, appointing judges and advancing his policies. Conversely, a Republican majority would give Senator Mitch McConnell, the G.O.P. leader, an effective veto over many of Mr. Biden’s ambitions.

“This is for all the marbles,” said Steven Law, the president of the Senate Leadership Fund, the leading Senate Republican super PAC, which has reserved at least $9 million in ads with allied groups, a sum seen as just a down payment. “Usually, the last thing you want to do is ask for money right after an election, but the donors are unbelievably revved up and ready to give again.”

Political strategists say they cannot recall any modern time when so much was on the line in a runoff election in a single state. Major Democratic and Republican donors alike are responding by opening their checkbooks, and small donors are rushing to contribute online, officials said. The result is a financial arms race unlikely to have a clear winner — except perhaps the local TV stations cashing the checks.

“It’s the Super Bowl of American politics,” said Ralph Reed, the founder of the Georgia-based Faith and Freedom Coalition, a conservative group that is planning to visit 500,000 homes in the coming weeks and follow up with digital ads, phone calls and texts.

“Everybody’s hopped up with the U.S. Senate on the line and in many ways the fate of the presidency and the courts,” said Mr. Reed, who predicted with more than a little hyperbole that $500 million could be spent on the election. “It’s crazytown.” 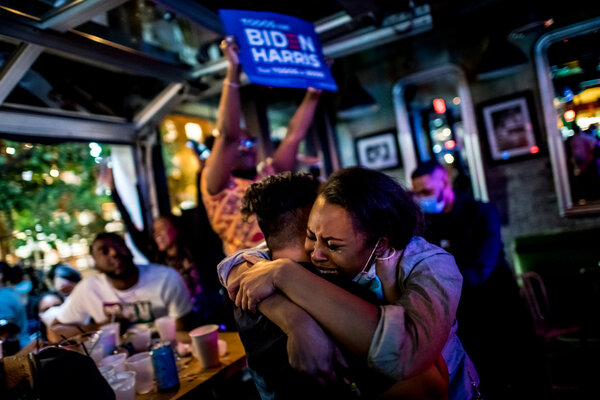 Unrelenting waves of negative ads have already begun. Roughly $135 million has already been booked in television spending during the nine-week sprint — even as some of the biggest expected spenders have not yet reserved time beyond the next week. Ms. Loeffler alone has about $40 million reserved, so far mostly attacking her opponent, Mr. Warnock.

“The commercials are running nonstop 24/7 on all the stations,” said Michael Thurmond, a Democrat and the chief executive of DeKalb County in the Atlanta area. “But what’s different is what you can’t see yet and you can feel: that the armies are being built, the resources are being stored up, you can feel the anticipation and excitement.”

Mr. Biden won Georgia by a little over 14,000 votes out of nearly five million cast, with the Atlanta suburbs delivering huge Democratic margins compared with 2016. But the political dynamics are expected to be very different in January.

Republicans are hoping to duplicate their turnout in rural and conservative-leaning areas, despite not having President Trump on the ballot to pull his impassioned supporters to the polls. And Democrats worry that Black voters will not come out in the same numbers as they did this month — turnout in runoffs almost always falls sharply — and that white suburban voters around Atlanta, who rejected Mr. Trump so resoundingly, will not be as eager to deliver a Democratic Senate to Mr. Biden.

“There will be some dissipation of the anti-Trump venom in Georgia,” Mr. Perdue predicted in a private call last week with donors and Ms. Loeffler, according to someone on the call who shared details of what was said. Some elements of the call were first reported by The Washington Post.

In a sign of the uphill fight for Democrats, Mr. Ossoff received nearly 100,000 fewer votes than Mr. Biden on Nov. 3, while his opponent, Mr. Perdue, received 700 more votes than Mr. Trump. Closing that gap is one reason Mr. Ossoff recently aired an ad linking himself to Mr. Biden, promising to work with the president-elect on issues like managing the coronavirus pandemic.

Some major Democratic donors, who requested anonymity to speak candidly, are downbeat on their party’s chances. Despite out-raising Republicans across most of the Senate map in 2020, Democrats lost several key races on Nov. 3 that party strategists had seen as winnable, including in Iowa, Maine, North Carolina and Montana. Yet those same donors said they were continuing to contribute to the Georgia contests because of the sheer significance of the outcome.

“The result of these two races is going to determine the majority in the United States Senate, which is going to determine the success or failure of the Biden policies in the next four years,” said Saxby Chambliss, a Republican former senator from Georgia. “You can’t spend enough money if you’re a Republican or a Democrat to ensure your side wins.”

Mr. Chambliss is familiar with the spotlight of a Georgia runoff. In 2008, he won one to deny Democrats a 60th Senate seat and a filibuster-proof majority after he campaigned calling himself “the firewall.” Now Mr. Chambliss predicted that a similar message promising to be a Republican check on the most liberal impulses of the left would prove persuasive.

Karl Rove, the veteran Republican strategist who is overseeing Republican fund-raising efforts for the two campaigns and the party, made a similar case in the donor call last week with Ms. Loeffler and Mr. Perdue. “This is the last line of defense for conservatives,” Mr. Rove said.

But Mr. Trump’s continued refusal to concede has complicated that messaging, since it depends on accepting his loss. Mr. Perdue and Ms. Loeffler, in a move widely seen as currying the president’s favor, recently demanded the resignation of Brad Raffensperger, Georgia’s Republican secretary of state, which has spurred something of a Republican civil war in the state.

Nationally, the Georgia races offer Republicans a chance to bring together both more establishment-aligned contributors, who were cool to the departing president, and pro-Trump financiers. One upcoming fund-raiser is being organized by Stephen Schwarzman, the chief executive of Blackstone, who gave about $30 million to Republican candidates and super PACs this cycle, mostly focused on the Senate, according to a person familiar with the matter.

The National Republican Senatorial Committee has already invested in a presidential-level ground operation in the state, putting 1,000 paid staff members on the ground and divided into 21 regions. Republicans across the ideological spectrum are involved in the Rove-led “Georgia Battleground Fund” fund-raising effort, including former Gov. Chris Christie of New Jersey, the former United Nations ambassador Nikki R. Haley and Nick Ayers, a Georgia Republican who served as chief of staff to Mr. Pence.

“Democrats had a significant financial advantage down the homestretch during this election season,” said Jesse Hunt, the communications director for the N.R.S.C. “The entire Republican ecosystem is working together to ensure the tables are turned.”

Democrats are hoping the political organization and movement created by Stacey Abrams, who nearly won her race for governor in 2018 by driving up turnout among the party’s base, will recapture that energy and especially help mobilize Black voters.

In only four days, Ms. Abrams spearheaded an effort that raised nearly $10 million online for Mr. Ossoff, Mr. Warnock and a voting rights group she founded, Fair Fight. On Tuesday, she headlined a virtual fund-raiser for larger donors to both candidates, who are doing much of their fund-raising in tandem.

After the losses on Nov. 3, some Democrats said that focusing so publicly on their fund-raising successes had proved to be a distraction, as top fund-raisers like Amy McGrath in Kentucky and Jaime Harrison in South Carolina lost by large margins. Ms. Abrams’s group declined to comment on its fund-raising since those first four days, as did both the Ossoff and Warnock campaigns.

In 2017, Mr. Ossoff ran in a special election for one of Georgia’s 14 House seats that broke financial records, topping $55 million in overall spending. That contest, which Mr. Ossoff lost, had so much ad spending that one local television station added an entire newscast to its evening lineup to make room for all the extra campaign advertising dollars.

That has not yet happened this time. But ad rates are soaring, and super PACs are being forced to pay drastically more than candidates are for the same television ads, because candidates are guaranteed the lowest rates. One 30-second prime-time ad on Thursday on the ABC affiliate in Atlanta was sold for $22,900 to a super PAC and $11,000 to Ms. Loeffler, according to Federal Communications Commission disclosures.

On the donor call, Mr. Rove said that he had heard a friendly complaint by a donor that the twin runoffs were “going to cost me a fortune.”