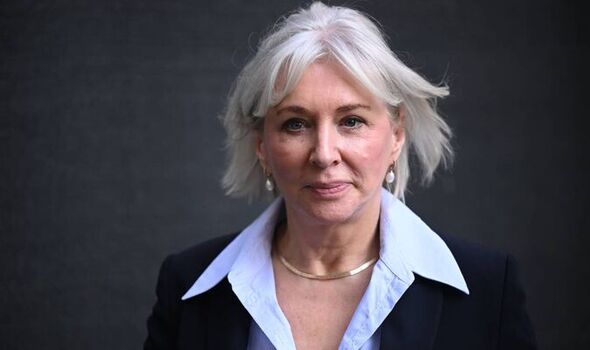 Furious Nadine Dorries tore into the former health secretary for failing to properly prepare the country for a pandemic while in government.

The Culture Secretary claimed ex-Labour leader Jeremy Corbyn would have ended up as Prime Minister if Mr Hunt had won the 2019 Tory leadership contest.

Ms Dorries also accused the Remainer of boasting that he would “swoop in” after the government collapsed on the “back of Brexit”.

The former health minister said Mr Hunt rang her on July 23, 2020 to tell her to follow China’s lead by removing people who tested positive from their homes and placing them into isolation hotels for two weeks.

“Your handling of the pandemic would have been a disaster,” she added.

“Your pandemic preparation during six years as health secretary was found wanting and inadequate.

“Your duplicity right now in destabilising the party and country to serve your own personal ambition, more so.

“You told others that the PM and government would swiftly collapse on the back of Brexit and you would swoop in.

“If you had been leader you’d have handed the keys of No10 to Corbyn. You’ve been wrong about almost everything, you are wrong again now.”

Ms Dorries, a fierce defender of the Prime Minister, later said there was a well-organised campaign to oust Mr Johnson by Remainers and “others who are disaffected”, such as those who have lost their government jobs.

She said it was “utterly bizarre” that a small group of MPs could overrule the mandate Mr Johnson won in the 2019 general election.

“I’d like to get this vote out of the way so that we can get on focusing on the issues that really need to be focused on,” she said.

“I find it utterly bizarre that a small number of MPs think that they can overrule that vote of 14 million people.”

Ms Dorries launched her broadside against Mr Hunt after he publicly declared he would vote against Mr Johnson.

Just three weeks ago, Mr Hunt refused to rule out standing for leader despite securing just one third of the votes in the 2019 contest.

He claimed the Conservatives will lose the next election if Mr Johnson remains in post.

”Having been trusted with power, Conservative MPs know in our hearts we are not giving the British people the leadership they deserve,” Mr Hunt said.

“We are not offering the integrity, competence and vision necessary to unleash the enormous potential of our country.

“And because we are no longer trusted by the electorate, who know this too, we are set to lose the next general election.

“Anyone who believes our country is stronger, fairer and more prosperous when led by Conservatives should reflect that the consequence of not changing will be to hand the country to others who do not share those values.

“Today’s decision is change or lose. I will be voting for change.”