Home » Younger Military Personnel Reject Vaccine, in Warning for Commanders and the Nation

About one-third of the troops have declined to take the vaccine. Many say they worry the vaccines are unsafe or were developed too quickly. Others want a sense of independence, even in uniform. 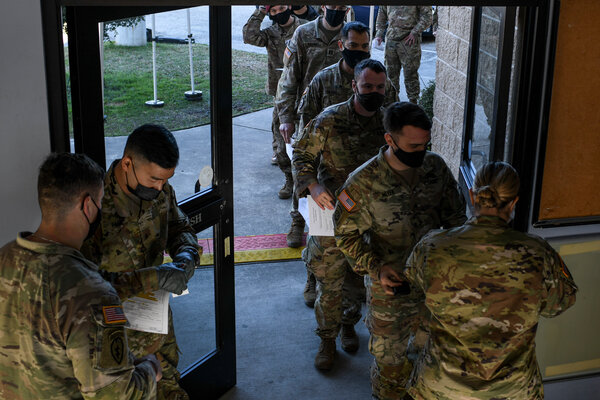 WASHINGTON — Americans who go into the military understand the loss of personal liberty. Many of their daily activities are prescribed, as are their hairstyles, attire and personal conduct.

So when it comes to taking a coronavirus vaccine, many troops — especially younger enlisted personnel as opposed to their officers — see a rare opportunity to exercise free will.

“The Army tells me what, how and when to do almost everything,” said Sgt. Tracey Carroll, who is based at Fort Sill, an Army post in Oklahoma. “They finally asked me to do something and I actually have a choice, so I said no.”

Sergeant Carroll, 24, represents a broad swath of members of the military — a largely young, healthy set of Americans from every corner of the nation — who are declining to get the shot, which for now is optional among personnel. They cite an array of political and health-related concerns.

But this reluctance among younger troops is a warning to civilian health officials about the potential hole in the broad-scale immunity that medical professionals say is needed for Americans to reclaim their collective lives.

“At the end of the day, our military is our society,” said Dr. Michael S. Weiner, the former chief medical officer for the Defense Department, who now serves in the same role for Maximus, a government contractor and technology company. “They have the same social media, the same families, the same issues that society at large has.”

Roughly one-third of troops on active duty or in the National Guard have declined to take the vaccine, military officials recently told Congress. In some places, such as Fort Bragg, N.C., the nation’s largest military installation, acceptance rates are below 50 percent.

“We thought we’d be in a better spot in terms of the opt-in rate,” said Col. Joseph Buccino, a spokesman at Fort Bragg, one of the first military sites to offer the vaccine.

While Pentagon officials say they are not collecting specific data on those who decline the vaccine, there is broad agreement that refusal rates are far higher among younger members, and enlisted personnel are more likely to say no than officers. Military spouses appear to share that hesitation: In a December poll of 674 active-duty family members conducted by Blue Star Families, a military advocacy group, 58 percent said they would not allow their children to receive the vaccine.

For many troops, the reluctance reflects the concerns of civilians who have said in various public health polls that they will not take the vaccine. Many worry the vaccines are unsafe or were developed too quickly.